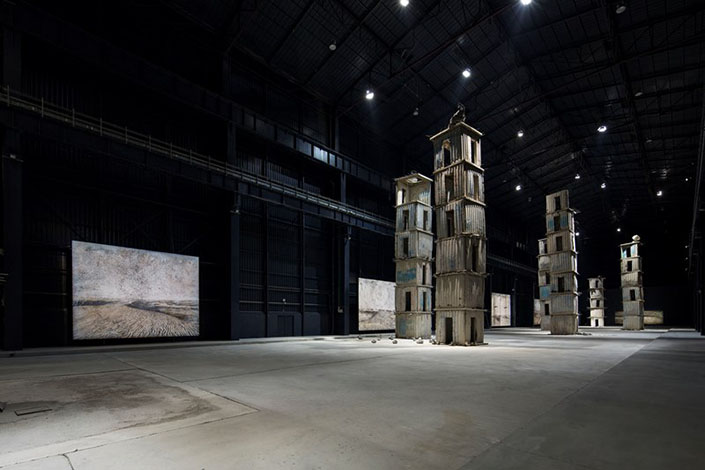 On 25 September 2015 Pirelli HangarBicocca unveiled the new installation by Anselm Kiefer: the new display, curated by Vicente Todolí, is an expansion of The Seven Heavenly Palaces, the permanent work conceived for the opening of Pirelli HangarBicocca in 2004 and based on a project by Lia Rumma.
Together with the seven “towers” – now open for the public to walk through – five large-format paintings, made between 2009 and 2013, form a single installation entitled The Seven Heavenly Palaces 2004-2015. Five large paintings are on show in the space of the “Navate” that contain The Seven Heavenly Palaces, adding to the permanent installation and giving new meaning to Anselm Kiefer’s masterpiece. The paintings are Jaipur (2009); two works of the series entitled Cette obscure clarté qui tombe des étoiles (2011); Alchemie (2012) and Die deutsche Heilslinie (2012-2013). Using the language of painting, these works make reference to some of the themes already present in The Seven Heavenly Palaces, including the great architectural constructions of the past viewed as an attempt by man to ascend to the divine, with the constellations represented by means of astronomical numbering. They also add a number of considerations that are key to the artist’s poetic vision, including the relationship between man and nature, and references to the history of ideas and of Western philosophy. 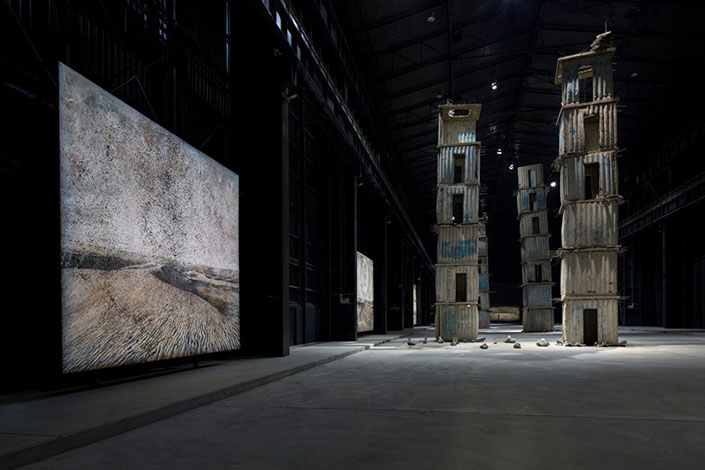 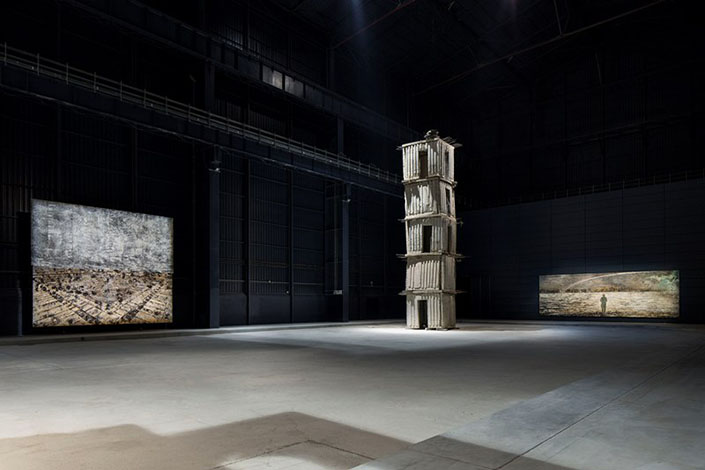 The first of the seven towers to be created, Sefiroth is also the shortest (14 metres). The tower culminates with a pile of seven lead books and presents neon lights that form the Hebrew names of Serifoth, viewed in Cabala as representations of the expressions and tools of God and forming the very material of creation: Keter (the Supreme Crown), Chochmah (Wisdom), Binah (Deductive reasoning), Chesed (Love), Gevurah (Power), Tiferet (Beauty), Netzach (Patience/Tolerance), Hod (Majesty), Yesod (Foundation of the world), Malkuth (Kingdom) and Daad (Understanding and Wisdom). 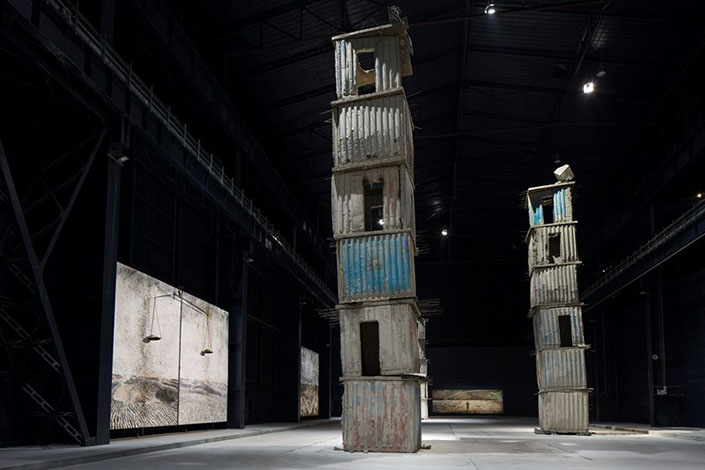 Melancholia is distinguished most of all by the completion of the last covering, a polyhedron taken from the engraving of the same name created in 1514 by Albrecht Dürer, which became one of the artist’s most famous allegorical images. Artists were defined as “those born under Saturn,” since people believed that the planet of melancholy represented the artist’s contemplative, ambivalent character. At the base of the tower there are the socalled “falling stars,” small sheets of glass and strips of paper marked with alphanumerical series that correspond to NASA’s classification of celestial bodies.

Ararat is named after the mountain in Asia Minor where, according to Biblical tradition, Noah’s ark finally came to rest. The ark is represented by a small model in lead present at the top of the tower, symbolizing a vehicle of peace and salvation, but also a warship, and therefore a vehicle of destruction and desolation. 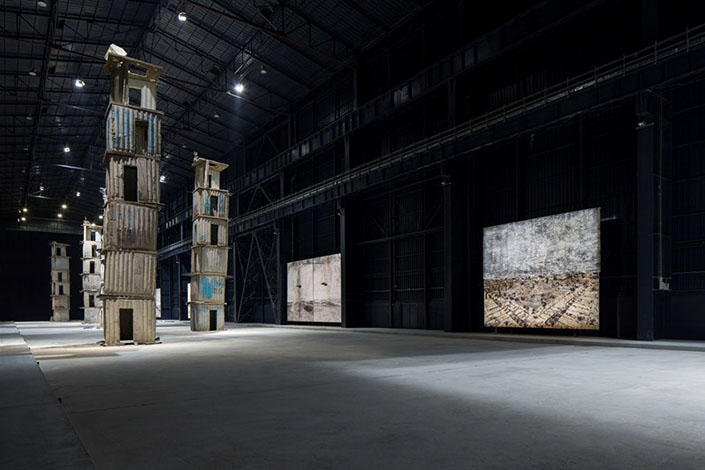 The most imposing tower in the entire installation stands 18 metres high, and is characterized by a lead film running all the way down around it, ultimately reaching the base and laying alongside an empty film reel and a camera made of the same material. The choice of lead, a material through which light cannot pass (and therefore prevents the production of any images), can be interpreted in di«erent ways: from the Nazi attempt to erase Jewish culture and ethnic minorities, to the iconoclastic battle that periodically runs through Western culture, to the Byzantine era all the way to the Lutheran era and the conception, often cited by Kiefer, that “every work of art cancels out those that precede it”. 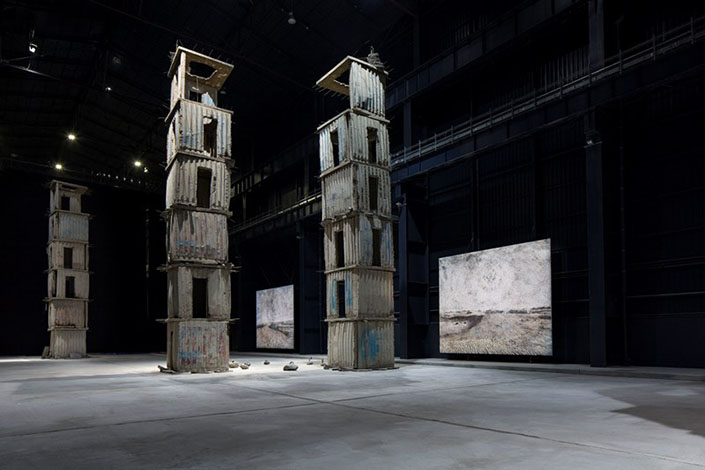 These two towers are disseminated at the base of meteorites that have been numbered with molten lead in irregular shapes, symbolizing the creation myth presented in several Cabala texts. The two towers are equally complementary at their crowns, culminating with writing in neon light detailing respectively the letters “JH” and “WH” which, when united according to the rules of Hebrew phonetics, form the world Jahweh, an unpronounceable term in the Jewish tradition.

The Torre dei Quadri Cadenti owes its name once again to the objects present from the top to the base of the construction: a series of wood and lead frames containing thick sheets of glass, many of which have been broken at irregular intervals. Surprisingly the frames do not display any images. Once again, Anselm Kiefer deals with the theme of missing imagery and its potentially multiple cross-references. 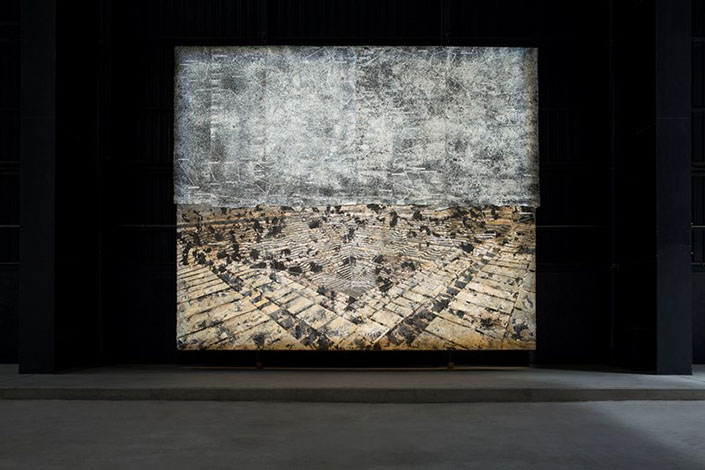 The title of this painting is taken from Jaipur, a city Kiefer visited during his numerous travels throughout India. The canvas portrays a nocturnal landscape: on the lower section the artist has painted an architectural structure that reminds the viewer of an inverted pyramid; above, a starry sky. The constellations visible in the sky, connected with lines, are numbered utilizing NASA’s classification system. From a thematic point of view, this artwork appears to be the one most closely connected with The Seven Heavenly Palaces: the pyramid becomes a symbol of man’s vain attempt to move closer to the divine. 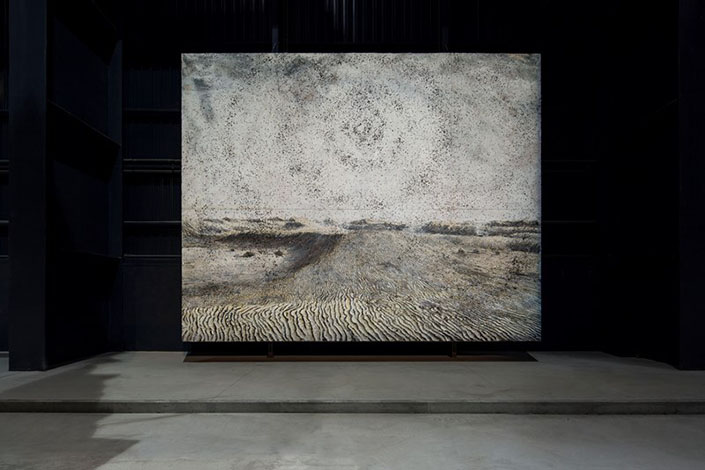 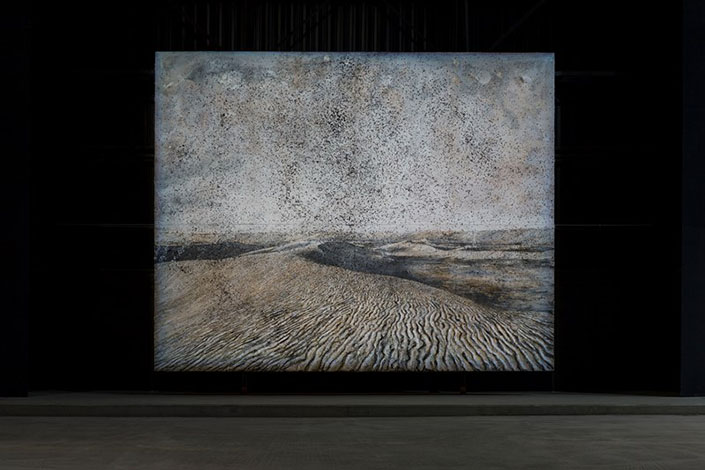 In these two paintings from the series Cette obscure clarté qui tombe des étoiles, Kiefer portrays a desert landscape, onto which he sets black sunflower seeds – a recurring element in the artist’s work. These symbolize fallen stars, black on white, as if they were negative prints. Adding di«erent materials to the surface of the painting, the artist passes beyond the limit between painting and sculpture, seeming to invite the viewer to enter his world. 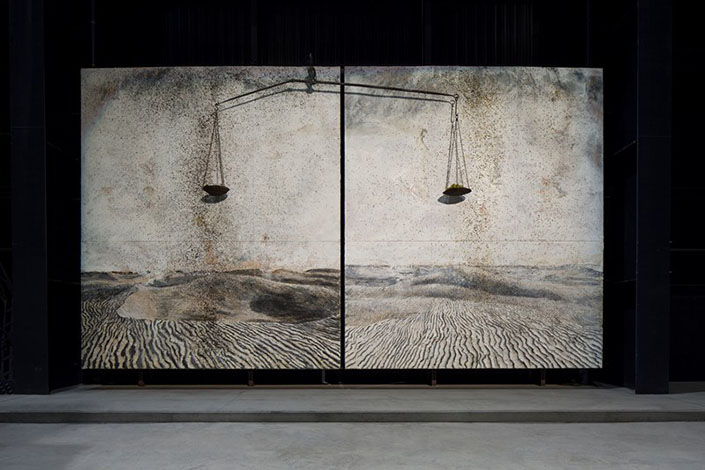 Alchemie is made up of two canvases set side-by-side that portray a dry, arid landscape in which the earth appears entirely sterile. A “rainfall” of sunflower seeds is the only sign of life and the hope of regrowth. The element connecting the canvases is a set of balance scales containing salt on one dish and sunflower seeds on the other: opposing symbols of sterility and fertility. These are a clear citation of the artist’s interest in alchemy, an esoteric science that aimed to transform lead into gold, and an allegory of man’s tension toward perfection and the divine. 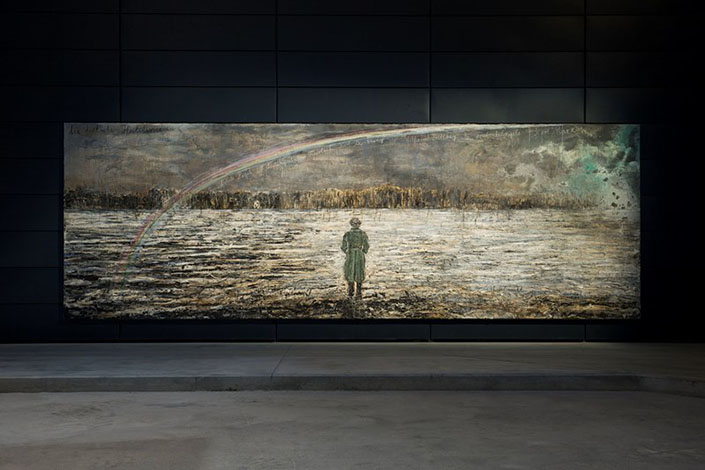 The largest painting in the Pirelli HangarBicocca’s display symbolically and literally portrays – as the title communicates – the history of German salvation. Set on a rainbow trajectory that connects earth and sky and crosses the entire surface, Kiefer transcribes, inserted within a historical-philosophical path running from the thinking of Illuminists to Karl Marx, the names of German philosophers who supported the idea of salvation through the actions of a leader. At the base of the painting stands the figure of a man, portrayed from behind as he gazes, solitary and alone, out over a landscape that echoes the romantic paintings by the artist Caspar David Friedrich. All around are set the names of thinkers who supported the idea that salvation can be achieved through the recognition of one’s own individual identity.