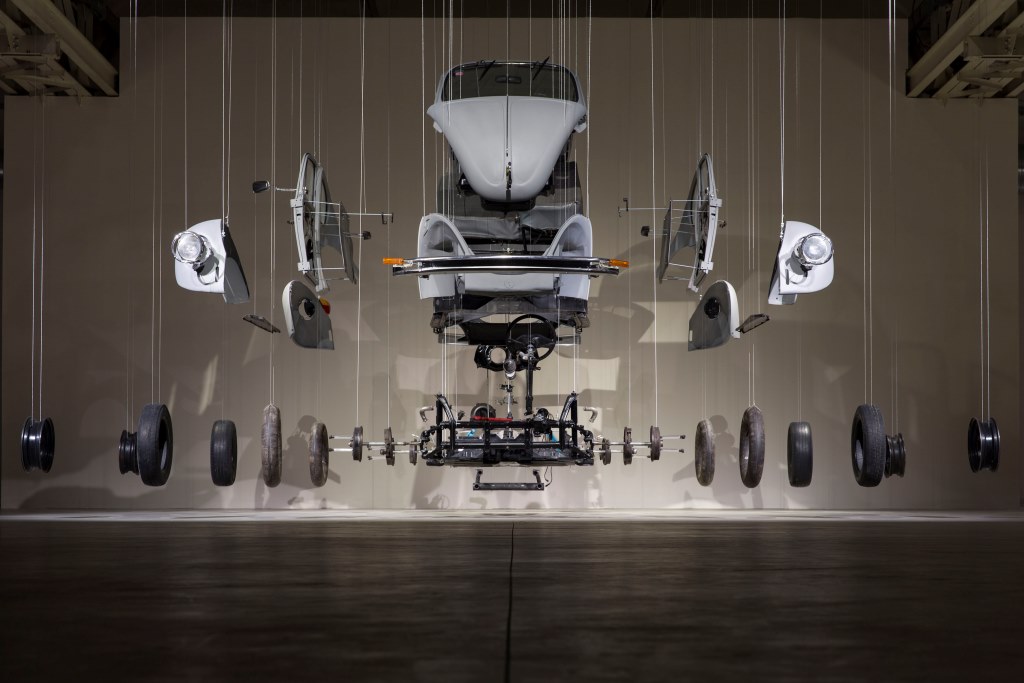 “Casino” is the first solo exhibition in Italy by Damián Ortega, who for the past twenty years has been one of the most interesting artists on the contemporary scene. In his work he explores the idea of sculpture through the use of everyday objects, subverting their meaning. The exhibition offers a sweeping overview of the artist’s work, with sculptures, installations, performances and films given a unique touch by the interaction between the nineteen works and the space of the HangarBicocca “Shed”.
At the centre of the show is the Beetle Trilogy, one of the artist’s most momentous works, in the form of an “epic” tale of the Volkswagen Beetle. A prominent characteristic of his work is the use of simple or recycled materials, such as tools and implements, which he reworks to highlight his interest in production systems, processes of transforming matter, and entropy.
In his practice, Ortega alters and deconstructs objects, building structures that create a dialogue between matter and form, action and thought. His entire production is permeated by a very personal and subtle sense of humour, which gives both meaning and originality to the most mundane things, in order to convey even the most challenging issues in a light-hearted manner.
Damián Ortega was born in Mexico City in 1967. Many institutions have presented solo exhibitions of his work, including the ICA in Philadelphia (2002), Tate Modern in London (2005), the Centre Georges Pompidou in Paris (2008) and MAM in Rio de Janeiro (2015). He has twice taken part in the Venice Biennale (2003, 2013); and has exhibited at the 4th Berlin Biennale and the 27th Sao Paulo Biennale (2006), the 11th Havana Biennial (2012) and the 12th Sharjah Biennial (2015). 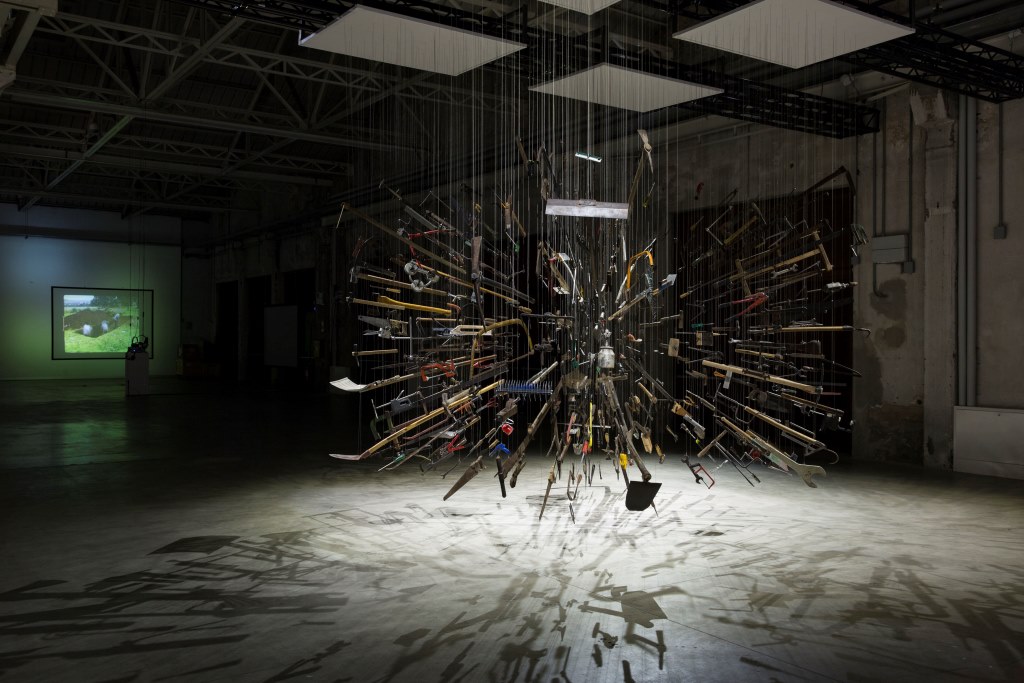 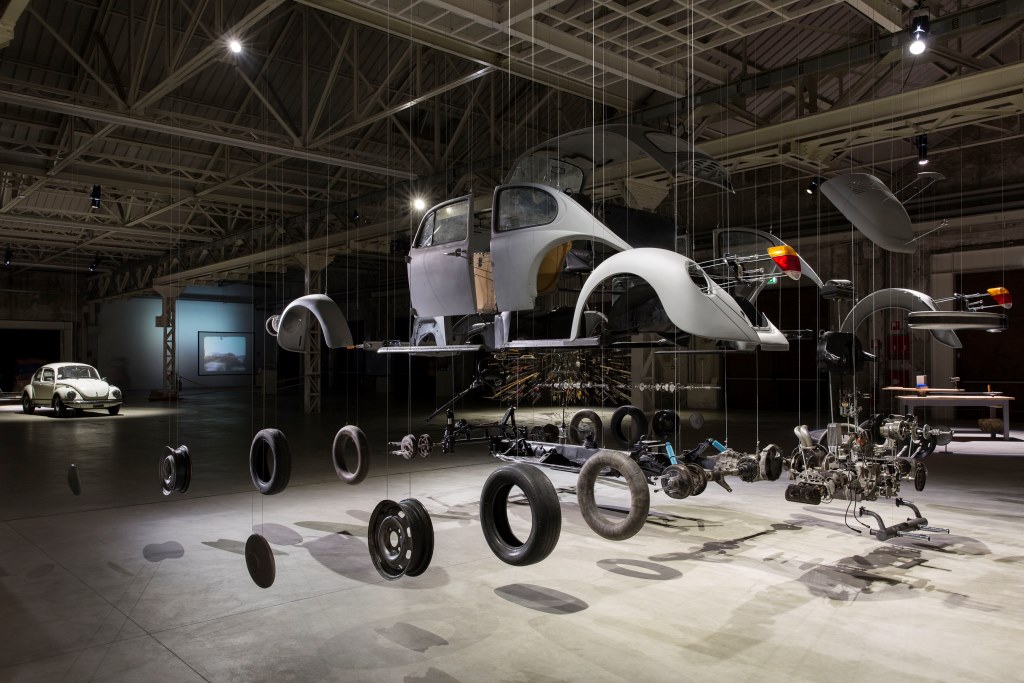 Using a 1989 Volkswagen Beetle, in Cosmic Thing Ortega furthers his investigation into the relationship between an object and the fixed space into which it is placed, calling into question our perception of everyday objects. During an interview, the artist detailed the circumstances that led him to creating this work: «I went to a used-car dealership and asked for help in taking it apart. Three fourteen- or fifteenyear-old kids, using very simple tools, like wrenches, disassembled it in about four hours. They were expert car scavengers. Car theft and the selling of auto parts are a multimillion-dollar industry in Mexico.» Using the Beetle repair manual, Ortega hung every single component in the exhibition space, creating an expansive, threedimensional schema of the original automobile. Within the work, each element is suspended at regular intervals, defying the laws of gravity. Through Cosmic Thing, the artist highlights the correlations and interdependent relationships that exist between different fragments of the Beetle: «My desire was to offer the expanded vision of an object. […] In the process I started to understand the conceptual importance of technique, and how it is related to form: the whole working process is what composes the piece.» 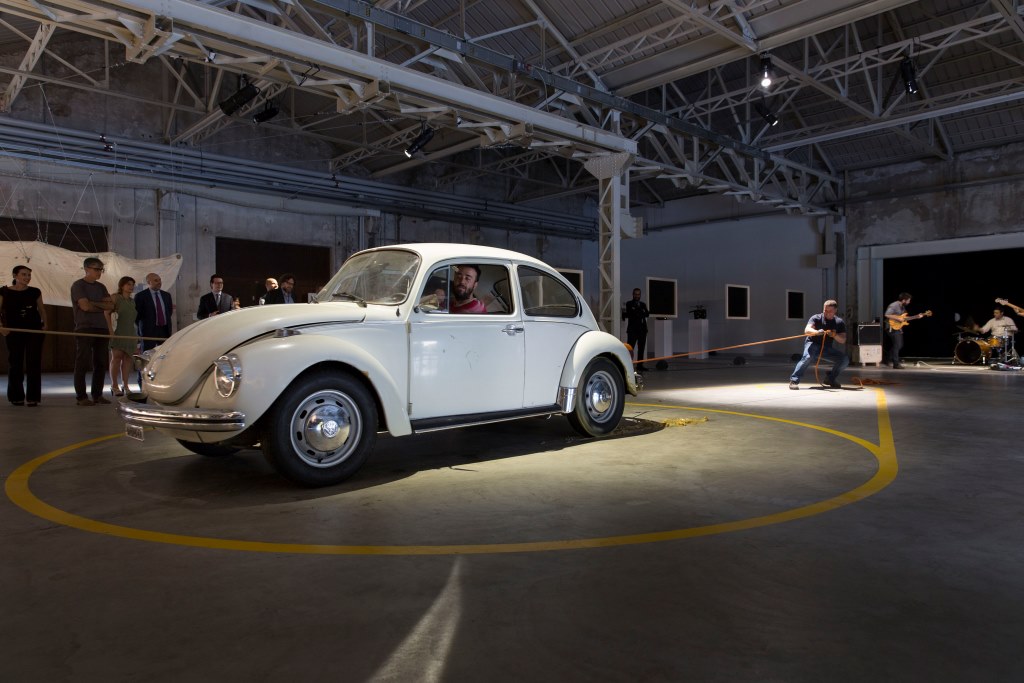 The performance Moby Dick consists of a true physical battle between artist and machine, during which Ortega uses a series of ropes and pulleys to attempt to control the driving force of a white Beetle as it roars “indomitably” across a layer of grease. The action is accompanied by a band playing a song of the same name by Led Zeppelin – featuring the performance of legendary drummer John Bonham (1948–1980), one of the most influential drummers in the history of Rock and Roll – positioned inside a space bordered by three intersecting circles that echo the symbol the drummer chose for the cover of the 1971 album for which Moby Dick was recorded. The title is also a citation of the novel Moby Dick by US writer Herman Melville (1819–1891), published in 1851. Ortega notes, «I wanted to use the name Moby Dick to create an obvious reference of the white car as a white whale, like a cartoon… there is something cartoonish about thinking of it as an animal, a fabulous reflection of the power and vastness of nature.» In this segment of the trilogy the artist analyses the relationship between man and nature within the urban context, as well as how this is manifested in contemporary culture. 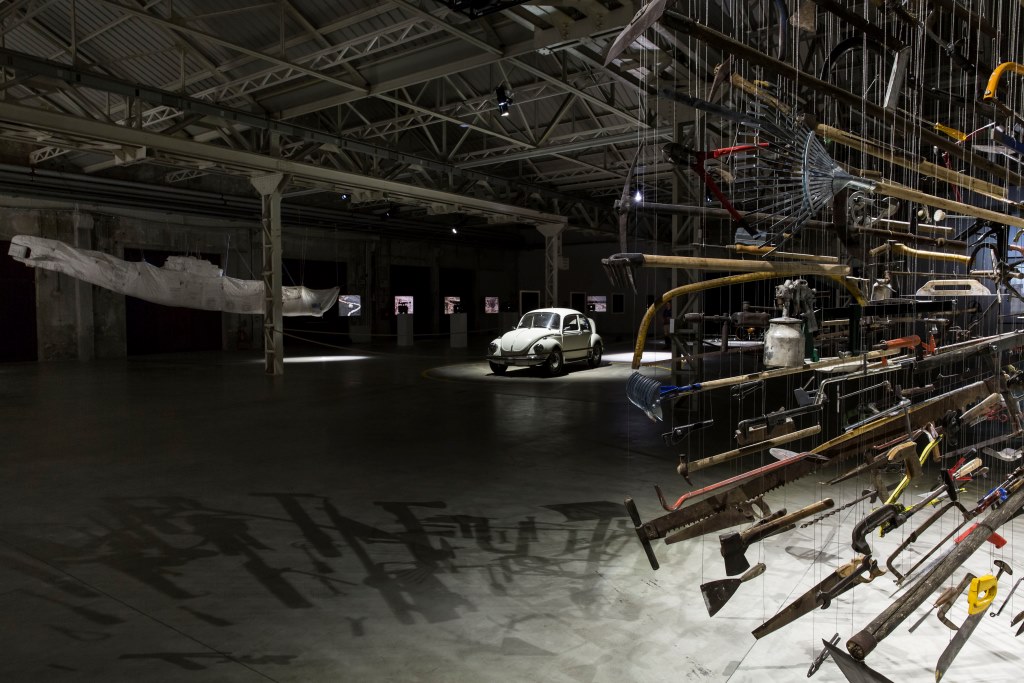 This installation replicates an image the artist discovered in a newspaper, where it was reported that the Army had found a submarine used by Narcos to transport cocaine from South America. The vehicle was built of common materials like fiberglass. Fascinated by the image, the artist created a small-scale submarine made up of numerous biodegradable plastic sacks filled with salt and hung from the ceiling on cables. At first glance, the work appears to be a monolithic, imposing object. But looking closer the viewer finds that a constant flow of salt is pouring out of the rear section of the submarine, which is destined to empty its materials. The constant fall of salt on the pavement creates a cone-shaped heap on the floor. The title of the work – Hollow/Stuffed: market law – recalls the poetry of T. S. Eliot (1888–1965): The Hollow Men (1925). The concept of moral “emptying” connected with modern man’s condition, which can be heard in Eliot’s composition, is in turn connected with a novel by Joseph Conrad (1857–1924), Heart of Darkness (1899) and the failure of colonialism. The submarine, presented as an object that has been stripped of its functions and is destined to decay, dialogues with the history of salt understood as an element capable of modifying and supporting the economic system of an entire country. With this work, Ortega establishes an ironic parallel between the salt market in the colonial era and our present day: just as salt once formed the foundation of commerce, today drug trafficking is an important source of income for many countries. 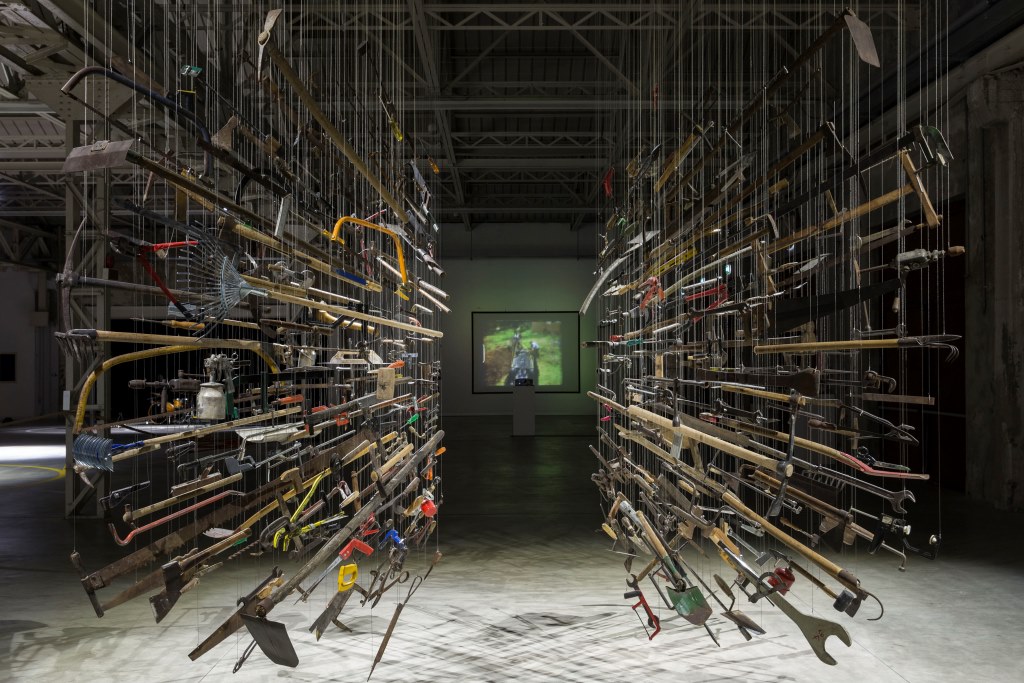 This installation appears as an explosion of hundreds of seemingly old-fashioned work tools: saws, pickaxes, hammers and so forth. The artist found these tools in a number of different flea markets around Berlin, then used wires to suspend them in mid-air. The centre of this vortex is characterized by an empty space accessible to visitors through any one of four different entrance points which, like Cartesian axes, divide the structure into four equal segments. Caught between empty spaces and volumes, Controller of the Universe seems to call into question – as the artist confirms – the physical identity of an object. Ortega notes, «it makes relative the limits between exterior and interior – the limits of a closed and hermetic space, or those of a solid body or volume, and the context around them.» The title of the work was inspired by a controversial mural by Mexican artist Diego Rivera (1886–1957), Man at the Crossroads, realized on commission in 1933 for the Rockefeller Center in New York City. Due to the presence of a portrait of Lenin that Rivera had inserted provocatively within the mural, it was destroyed, and the following year was painted again by the same artist for the Palacio de Bellas Artes in Mexico City and entitled El hombre controlador del universo. Damián Ortega’s piece is based on the ambivalence that exists in the relationship between man and technology; although the artist is fascinated by work tools and production systems, this work expresses his scepticism in the face of the excessive, indiscriminate faith contemporary man places in technical progress 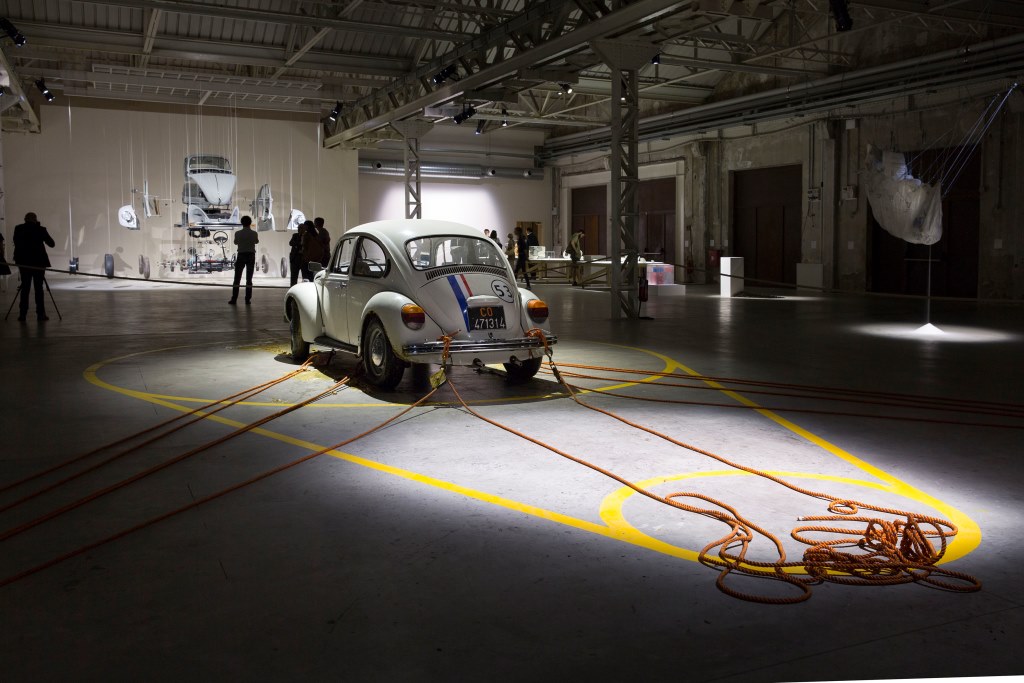