The solo show “The Dream Machine is Asleep,” by Eva Kot’átková (Prague, 1982) is an original and immersive project in which existing works are placed side by side with new productions, including installations, sculptures, over-sized objects, collages and performances. Starting from a vision of the human body as a machine, a great organism of which the functioning requires checking, regeneration and rest, and from the idea of sleep as a moment in which, through our dreams, we come up with new visions and enter parallel worlds, the exhibition explores our most intimate projections and thoughts, as well as the angst and disorientation of contemporary living.
At the center of “The Dream Machine is Asleep” there is the installation of the same name: a gigantic bed, at the base of which there is what the artist defines as an office for the creation of dreams. With this work, Eva Kot’átková continues her research into the systems that regulate our lives, countering them with imagery from the universe of childhood in order to make up for the lack or the loss of imagination.
In order to access the exhibition space, the visitors are invited to pass through the work titled Stomach of the World (2017), an allegory of the world, described as a chaotic organism which alternates between processes of ravenous assimilation and moments of stasis, empathy or clashes between its inhabitants, and periods of control, digestion, expulsion and recycling of the ‘waste’ produced, in other words its phobias and states of angst. The work, comprising of a video presented inside an installation which may be accessed by visitors and which takes on the stylized design of a stomach, makes use of protagonists and imagery taken from the world of childhood and mythology. 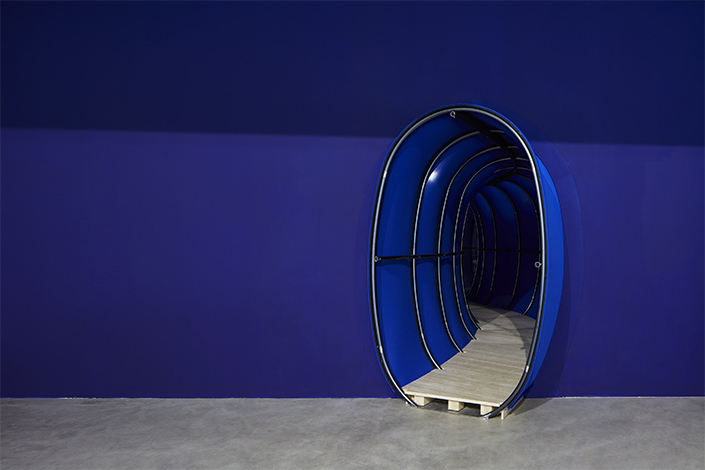 Stomach of the World is projected in a small circular room accessed via a long, curved structure in fabric and metal, whose forms seem to hint at an organ of the human body. The work was inspired by a child’s drawing in which the world is depicted as a digestive system.

The video is made up of a series of episodes showing a group of children participating in a sequence of strange exercises accompanied by a narrator’s voice off-stage. This pronounces reflections and remarks on the body and its functions, giving at the same time instructions: «Breathing in an enclosed space, breathing from one source. If you lie on your back and breathe out freely, soon you’ll have very little breath left.» The children perform different activities and exercises in a school gym and then at an open-air landfill: drawing to reproduce an x-ray of their body, breathing to recycle someone else’s air, articulating to eat words. 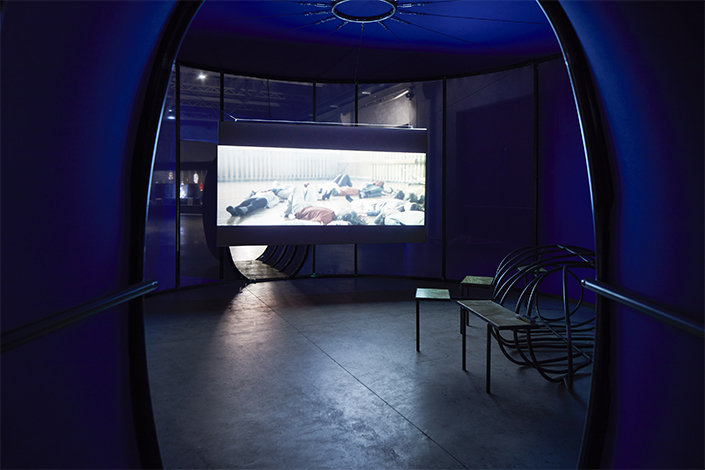 The video is characterized by a hypnotic atmosphere, drawnout time, and mechanical operations that recall the long waits of bureaucratic procedures. The camera records every tiny detail of the objects and bodies that make up the scenario from an analytical and external point of view.

Using media and languages derived from theatre, and by means of childhood imagery, Kot’átková stages the fears and anxieties of childhood associated with the internal malfunctioning of the human body, but also with the external causes that can trigger physical discomfort and difficulties. At the same time, the work presents itself as an allegory of the world as a digestive system in which we are reflected by what we eat and consume, and where waste continues to accumulate. Stomach of the World thus introduces further and deeper possible meanings concerning contemporary social and environmental issues; it evokes and examines the body not just in its biological dimension, but also as a social and political body 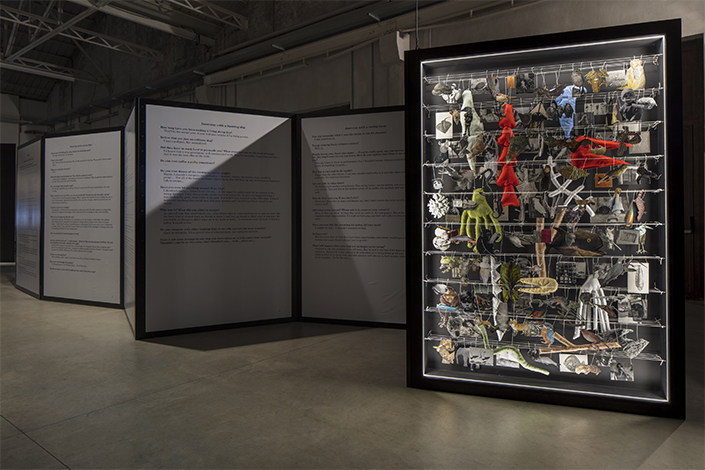 Literature plays a fundamental role in the artist’s work. Influenced by authors such as Samuel Beckett (1906–1989) and Franz Kafka (1883–1924), Kot’átková uses stories and narrative in many different forms: the text is often conveyed in oral forms, while in other cases it has merely symbolic value. The artist also reflects on how narration is a powerful institutional and political instrument for modelling and influencing thought in certain directions. She has continued her research into these themes for the exhibition at Pirelli HangarBicocca, with the creation of three new installations: a vertical book, another laid horizontally on the floor, and a concertina book to leaf through. These human-sized books are arranged in the exhibition space, also serving as display stands for collages and photomontages made by the artist. The latter create a visual diary for exploring and immersing oneself in Kot’átková’s imagery: a collection of thought and notes on themes the artist is deeply interested in, such as the relations between the body and its surroundings (external forces, objects, other bodies), the miserable conditions of animals in contemporary society, the sociopolitical system seen as a machine. 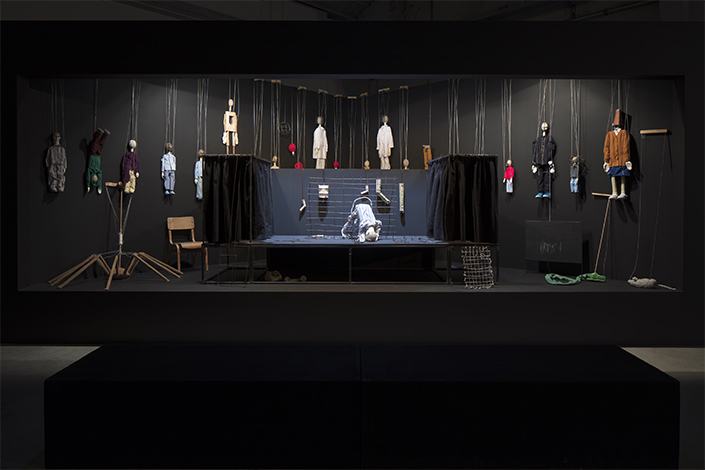 Originally created for Art Basel in 2016 as a live play, the work consists of a little puppet theatre in which numerous marionettes hang from a backdrop. They appear to be waiting to be activated and act as an unusual “background”. Thanks to a soundtrack, visitors can listen to a narrator’s voice that recounts the actions and story of the original show.

The protagonists of the story are three puppeteers that follow the instructions given by an offstage male voice and interact with the figure of a silent boy seated next to the stage, who, in the original play, was a central figure in the performance as it was his story that was being told. The script transports the viewer inside Eva Kot’átková’s imagery, presenting different forms of manipulation through a body language—through free or controlled movement—charged with metaphors. In this work too, more playful moments are permeated with disturbing images or situations that lead us to reflect on how control, authority, and physical and psychological violence may occur in ambiguous and unexpected ways. In its static form, Cutting the Puppeteer’s Strings with Paper Teeth is presented as an action frozen in time that is open to different possible interpretations. Thanks to an audio and a leaflet with its script, the audience can follow the story and imagine the actions on the stage. Feeding the Cleaning Machine with what Others didn’t Finish, 2018

This work presents the everyday activity that is carried out during the morning or evening hours in many institutional spaces, such as schools and hospitals, connected with the cleaning and hygiene of public areas. Often considered by society a secondary function of little value, this activity—hidden from our gaze and intended to prepare the stage for the “real” activities—becomes a subject of artist’s investigation. A group of performers occupies a circumscribed area, the plan of a flat or a house drawn on the floor. Above it, a platform acts as a prop used by the performers to carry out actions at certain times according to choreographies that integrate the human body in the machine that keeps the exhibition space clean. As in post-modern dance, an avant-garde movement born in the United States in the 1960s-1970s where everyday actions are transformed into dance movements performed by non-professional dancers, the artist elevates repetitive and monotonous actions to make them become part of a choral activity. 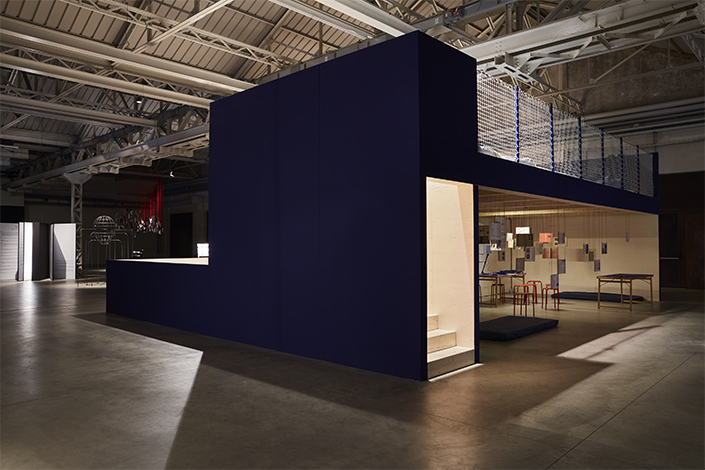 Created for the exhibition at Pirelli HangarBicocca, this work takes the form of an oversized bed on two levels. While the space on the lower level is accessible only to children, visitors are allowed to the upper level and invited to lie down and listen to stories and dreams through a headset.

With The Dream Machine is Asleep Kot’átková explores the boundaries between the imagination of childhood and the adult world, proposing the dimension of dreams as the meeting ground and creating an installation that is used in different ways by different groups. The lower level has an “office” for the creation of dreams: children use this space to create an archive of possible dreams to help those who have lost their oneiric abilities and are no longer able to dream. The upper level, on the other hand, allows people to lie down as though in a real bed and try to dream through the stories imagined by the children. An intimate place like a bed can become a public space where oneiric tales can be freely manifested to create a collective unconscious. For the artist dreams become a kind of alternative narrative that is equally effective for describing the surrounding reality.

The body is seen as a machine, that is equally vivid in night- and daytime: while in the day it performs various activities, in the night it continues to be active, but with tiny differences. In the artist’s words: «it walks without the legs getting tired, it speaks even if no one else can hear, it occupies places no one else is seeing and sees the world as it could work without the need to follow rules and daily routines.» 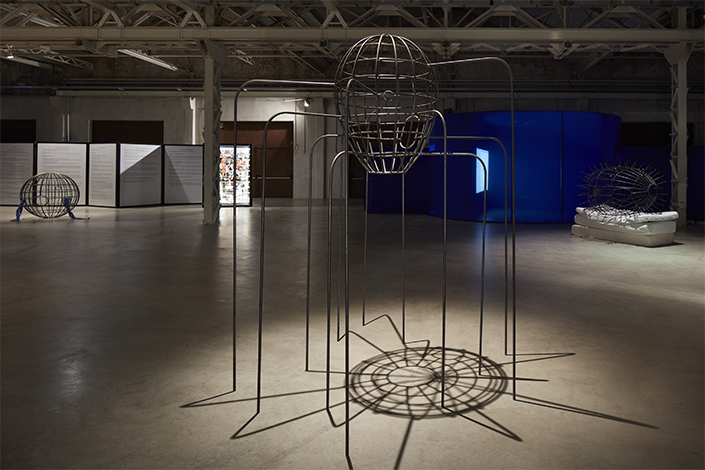 Heads is a sculptural series of seven heads, made entirely from metal, whose stylistic characteristics bring to mind Italian Pittura Metafisica of the early 20th century, in which the figurative representation of the body was evoked by mannequins that acted as alien presences in the urban landscape.

At Pirelli HangarBicocca, each of the figures suggests a different emotional and psychological state, such as solitude or curiosity, and each assumes a different position within the space. The sculptures are equipped with everyday objects such as shoes or books, which further accentuate their anthropomorphic appearance. At certain times, the heads cease to be mere sculptures and are worn by performers—functioning as cages or body extensions—to enact the different states of mind.

Through these works, Kot’átková gives visual form to those aspects associated with the body that usually remain more abstract and lack physical tangibility, continuing her reflection on the “traps” that condition human existence.