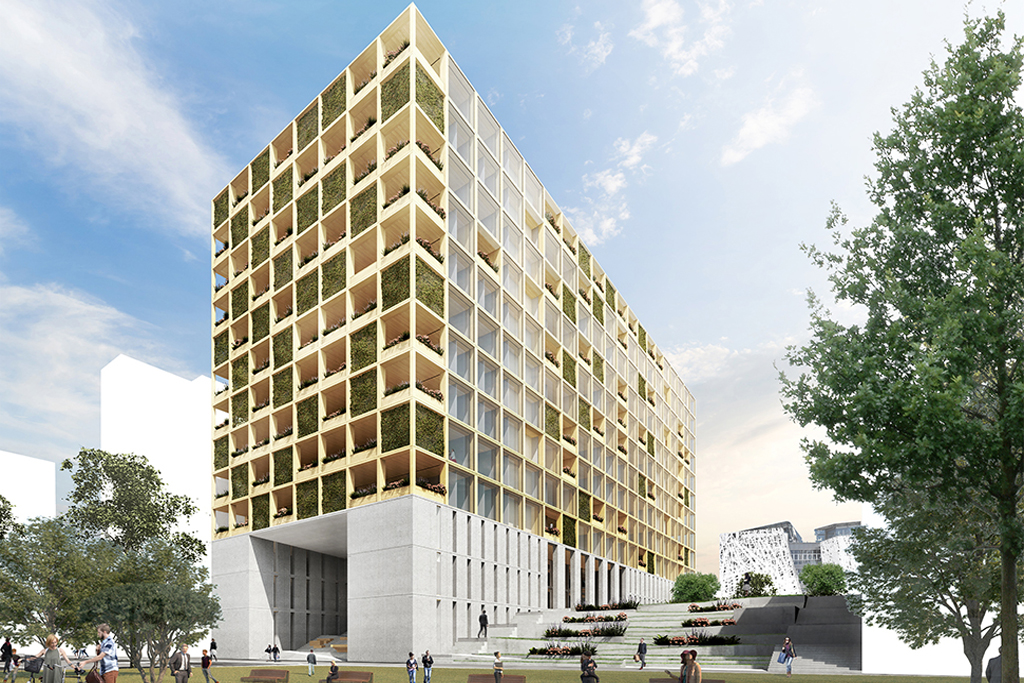 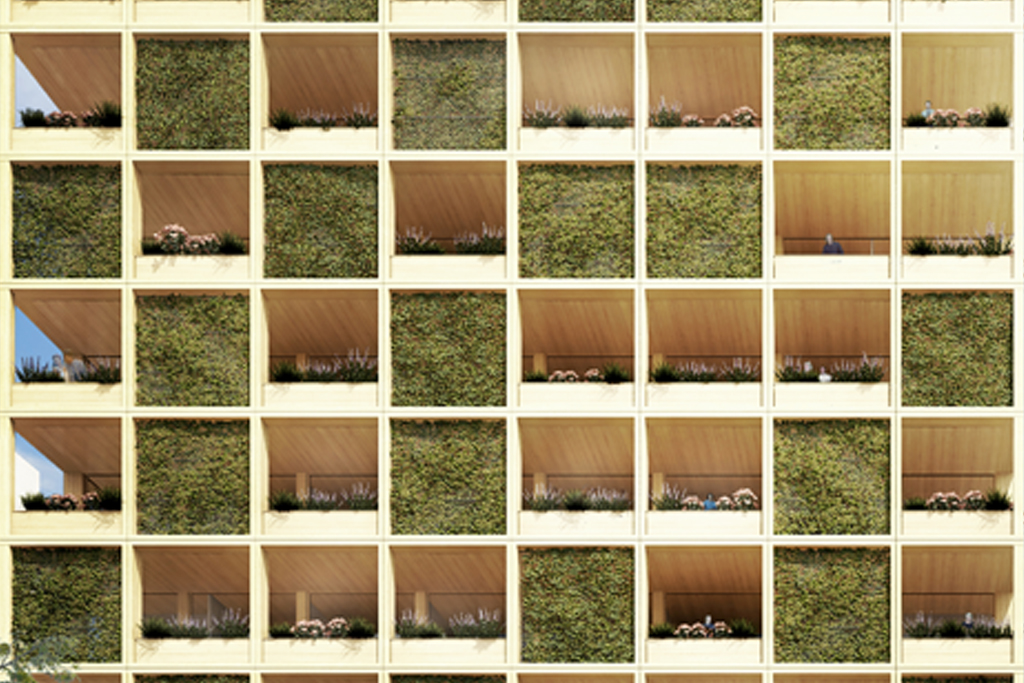 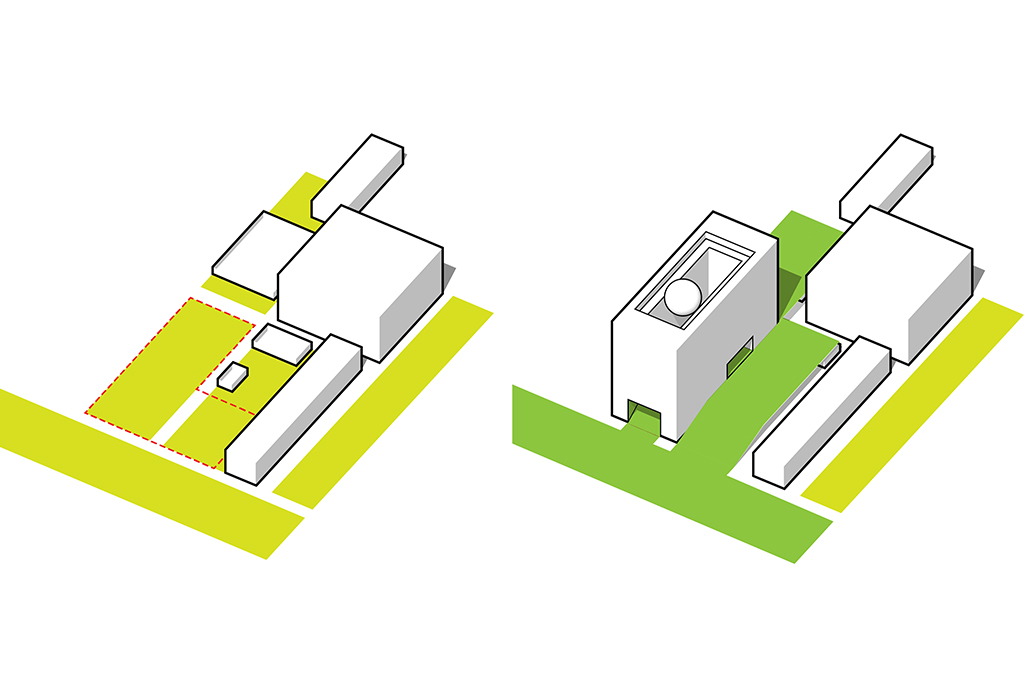 The urban layout of the Campus fits within the regulatory grid generated by Cardo and Decumano, remaining within the limits of respect and alignments assigned, making the provisions for MIND’s “green city” its own.

The Common Ground is an exclusively pedestrian and cycle area, all flows including those of future electric vehicles provided for in the Master Plan are segregated at the current ground floor.

All the activities connected to it are in fact brought to an altitude of + 7.50m with a series of ramps, terraces and stairs with the aim to curve the space of the Decumanus towards Palazzo Italia through the Common Ground, bypassing the existing technological areas and the new service roads to research activities at high altitude. 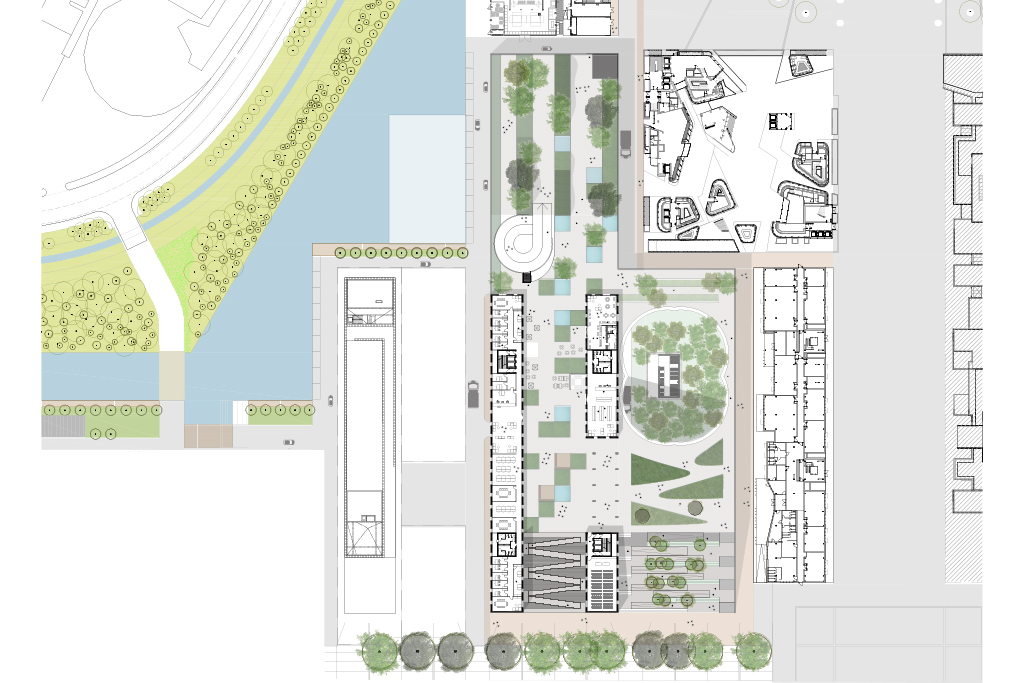 The Common Ground gains green surface by presenting itself as a continuum of shaded walks that serves the entrances of the new building and crossing the Campus leads to Palazzo Italia.

What is currently the back of the Cardo N-O building with deposits for technical gas cylinders, becomes the central axis of the Campus; the new plate circumscribes the area of ​​the cylinders, following the path of the safety distances, with a terrace immersed in the foliage of the fruit trees below; the common areas of the Imaging Facility overlook this undergrowth with large windows.

The new building with all the research activities is located along the western border of the Campus area, occupying all the available volume: thanks to a compositional play of full and empty spaces, the expected requested area fall within the maximum available ones.

The canteen service is positioned in the center of the Campus so that all HT staff can make use of it. 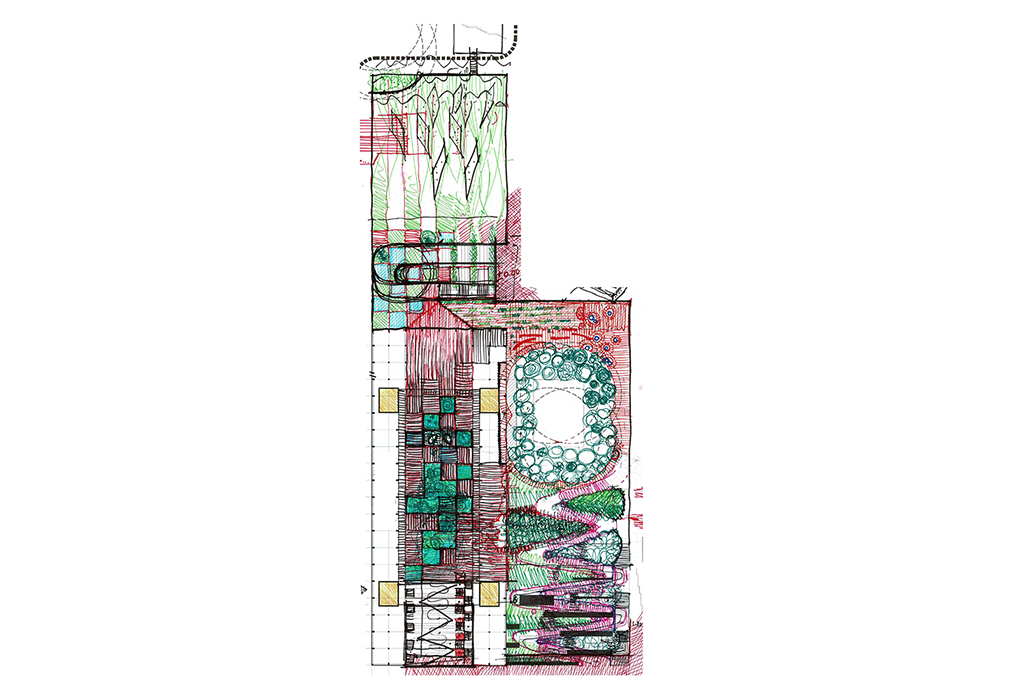 The presence of service buildings in a centralized position within the urban layout of the Campus area made it necessary to study an alternative connection strategy. By positioning the main building along the west edge of the intervention area, there is the possibility of creating a green connection that leads the Decumanus in direct connection with Palazzo Italia. This new green axis, going beyond the service buildings at altitude, thus becomes a fundamental and connective path between all the buildings of the Campus, connected via altitude paths, ramps and steps. These places become an opportunity to stop, meet, sports, art and culture, usable and accessible.

The surface of the internal courtyard of the new building is also freely accessible by Campus users as it is an integral part of the park without solution
of continuity: it is an area that offers a paved surface greater than the external one. Thanks to the height of the building and the presence of pools of water
it will always be very fresh and pleasant to attend during the warmer months. At the western front of Palazzo Italia, a further portion of a raised park is provided, connected to the countryside by means of a helical ramp already designed to be suitable for the ascent of cars in case of conversion of the green area to car parking. The surface of the plate is gently undulating with small grassy reliefs and bushes, alternating with paved areas, equipped with seats and shaded with photovoltaic shelters. 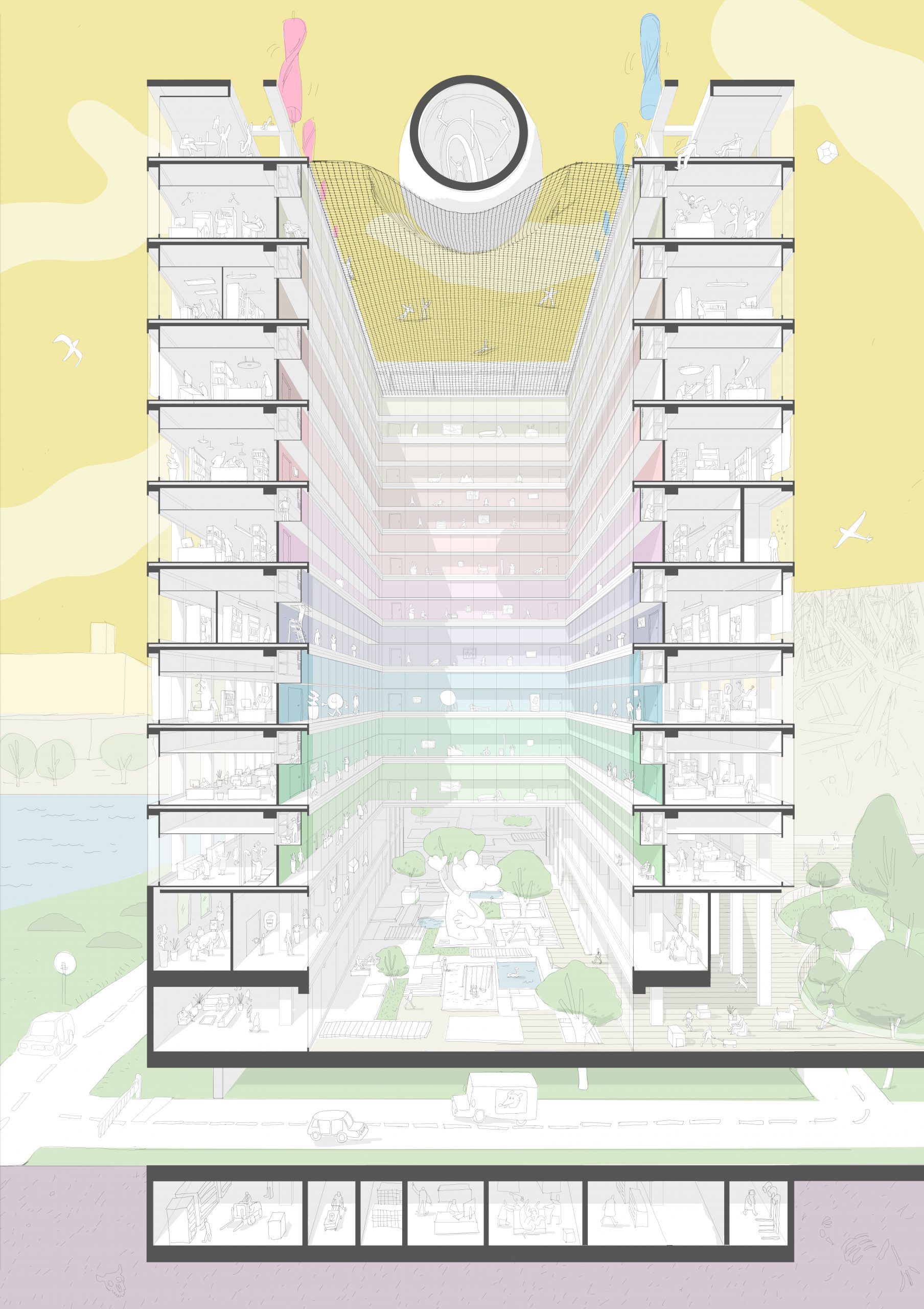 The new building is organized on 14 levels above ground; each level is organized around a balcony that turns around a central void; at the first level it functions as a public court that is part of the Campus.

The balcony is wider in some points, such as in the corners, to give more space, comfort and visibility to users; at each level the regular cadence of the workshops is often interrupted by small service spaces for relaxation, waiting and socializing.

Each level is served by two stairwells equipped with double ramp stairs and double emergency exit: in the same stairwell there are therefore two stairs compartmentalized between them, so as to double the load of people fleeing for each vertical structure.

On the roof the “Space of the Cosmos” an environment dedicated to meditation on oneself and the whole cosmos, a spherical, dark and silent belly, within which it is possible to rest the senses, listen to music, concentrate on one’s breathing, give a look at the cosmos with a planetary projector, make dizzying experiences with a 3D projector, learn and share, … 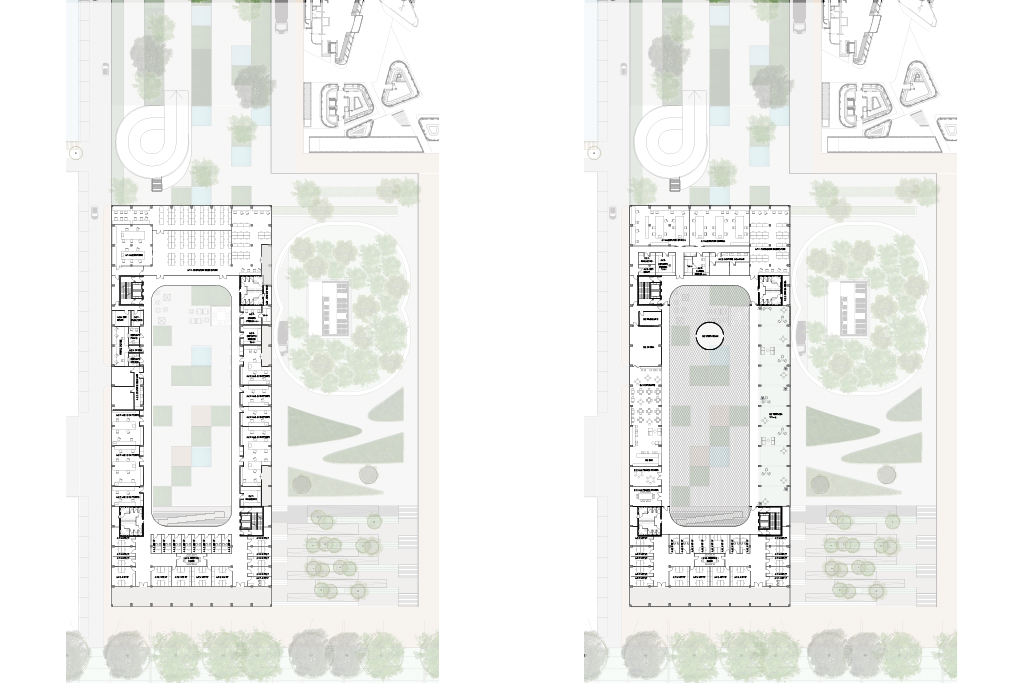 The frame structure, a regular mesh of 5m X 5m X 5m, allows to be able to configure the interior spaces in an almost free way – the walls have no structural function – while ensuring the possibility of using dividing elements of different materials depending on needs that could change over time. This modularity is also reflected in furnishings and finishes: the possibility of using standard elements guarantees significant savings both in economic terms and in terms of speed of installation, maintenance and updating.

The planimetric layout, therefore, can be modified at any time and with a greatly reduced expense if compared with modifications on non-modular architectural. The optimization of the distribution scheme has been designed to allow, thanks to the spacious connections and the generous openings, an efficient internal logistics, both as regards ordinary supplies, and as regards the activities carried out and the transport of bulky equipment and supplies.

The technologies used will be, except for the base of the building, exclusively dry, through the use of wooden carpentry, plasterboard, glass partitions etc. This flexibility is not limited to the internal spaces of the building: the frame structure, in fact, maintains its regularity throughout the development of the building, including facades. Consequently, the same perimeter walls – actually single infill elements based on the 5X5 module, can be moved as the needs vary, changing the configuration of the open spaces and the composition of the elevations. 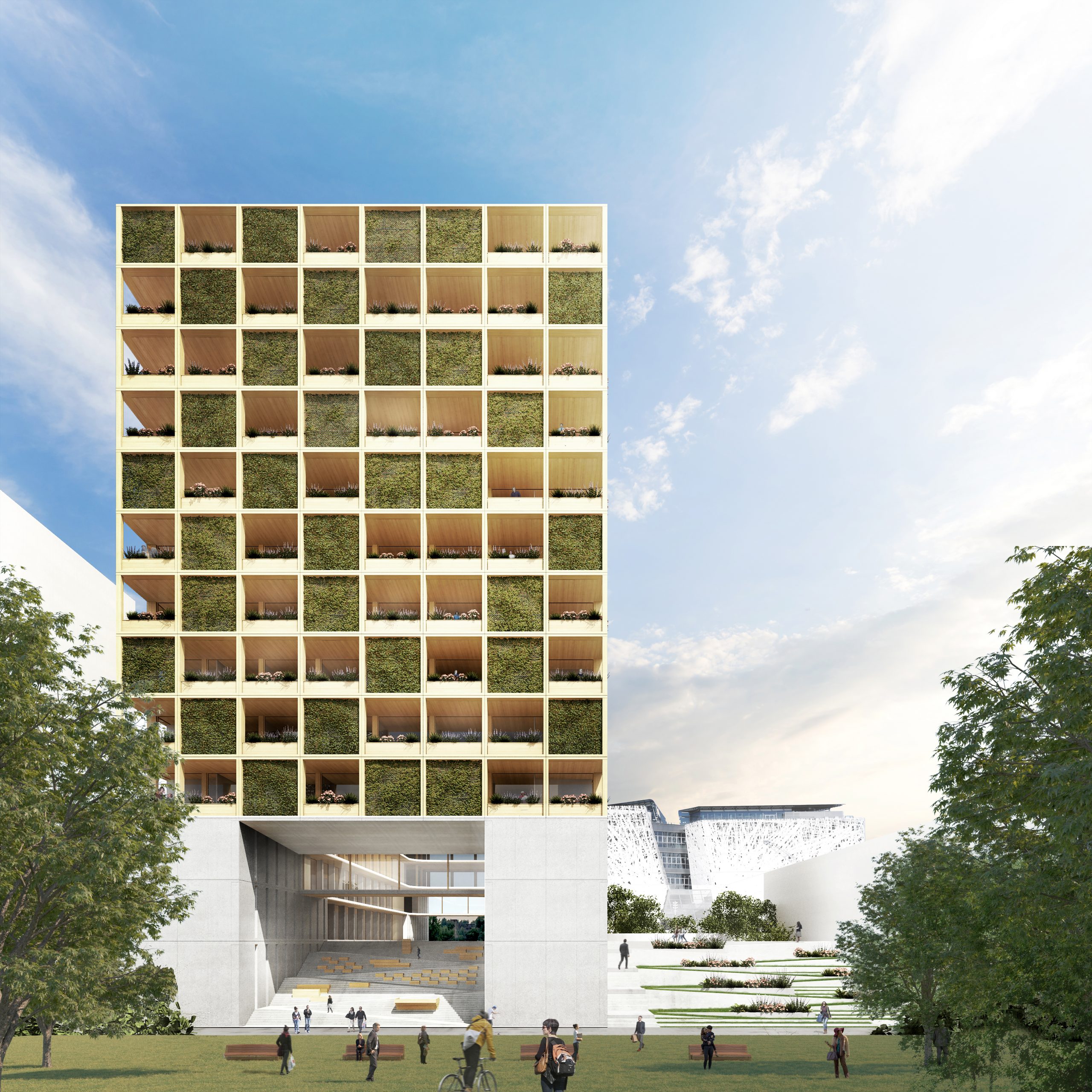 The volumetric articulation, the choice of materials and the orientation of the building arise from the beginning from the intertwining of needs and opportunities, critical issues and solutions. The design idea has been inspired by the search for effective and cutting-edge systems and technologies.

The building envelope has been designed to meet the highest standards in terms of thermal insulation with the use of materials of mainly natural origin and which promote perspiration. Depending on the exposure of the fronts and the internal functions to be hosted, strategies for mitigating solar radiation have been adopted in the summer season and in particular the entire south front has a large terrace which – thanks to the deep overhang – allows you to benefit from free contributions in the winter season and prevent irradiation in the summer season. The east and west fronts are composed starting from present needs with a look to the future. The modularity of the facade elements in fact allows, also in view of the evolution of needs, to be able to choose, for each module, among three different configurations:

• Solar greenhouse with transparent photovoltaic external panel based on silicon gel and internal heat reflective curtain. The greenhouse is equipped with a micro-ventilation system to protect the internal surface from overheating;

• Loggia with reduced depth with metal support for the cultivation of climbing essences;

• Loggia with greater depth with “vasapetto”: parapet vase for the cultivation of ornamental essences equipped with a system for collecting, filtering and phytodepuration of rainwater