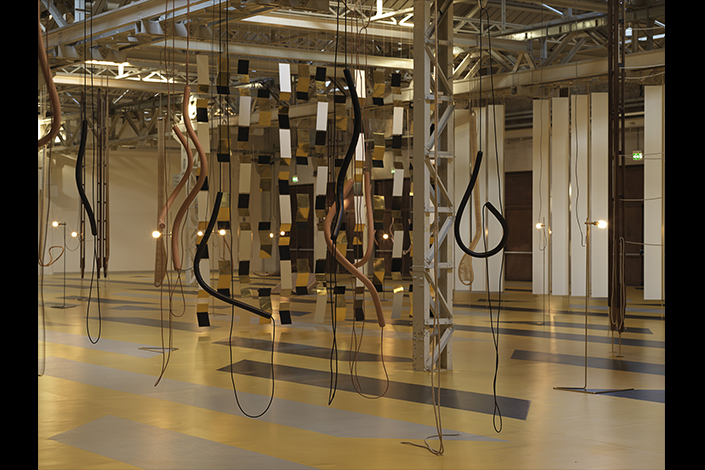 Through her sculptures Leonor Antunes (Lisbon, 1972) reinterprets the history of art, design, and architecture of the twentieth century, and in particular the Modernist tradition, in its most radical and experimental instances. Thanks to a meticulous research into several projects and works, Antunes, after selecting specific details and fragments, transforms them into new forms and elegant artworks. For her sculptures Antunes prefers to use natural and organic materials on which the traces of time passing remain visible—rope, wood, leather, brass, rubber, and cork, among others—employing artisanal and vernacular techniques in clear opposition to mass production, in an ongoing attempt to preserve and hand down knowledge and traditional skills.
“the last days in Galliate” is the first major exhibition in Italy of the work of Leonor Antunes, conceived as a complex site-specific installation that fills the 1,400 square meters of the space known as the Shed in Pirelli HangarBicocca: the works, many of which are new productions, converse with the context structural elements and natural lighting, thus merging in a single narrative.
Milan and its rich Modernist tradition, in particular the work of architects Franca Helg (1920-1989) and Franco Albini (1905-1977), are the source of great inspiration for this artist, who weaves these tales with the cultural heritage of companies as Pirelli and Olivetti and the projects realized with the manufacturing house Vittorio Bonacina—today known as Bonacina1889—active in the production of furniture and other items made with rattan and rattan-core. The Shed is transformed by an intervention that covers the floor with a linoleum intarsia, inspired by a design by artist Anni Albers (1899-1994), whose colours hark back to the iconic floor designed by the architect and designer Gio Ponti (1891-1979), realized in 1960 for the Pirelli skyscraper in Milan.
By inquiring into the meaning of everyday life objects and the social role of art and design as means of emancipation and improvement of quality of life, Leonor Antunes creates within the Pirelli HangarBicocca exhibition space a complex and stratified visual tale that leads the visitor through an unedited choreography. 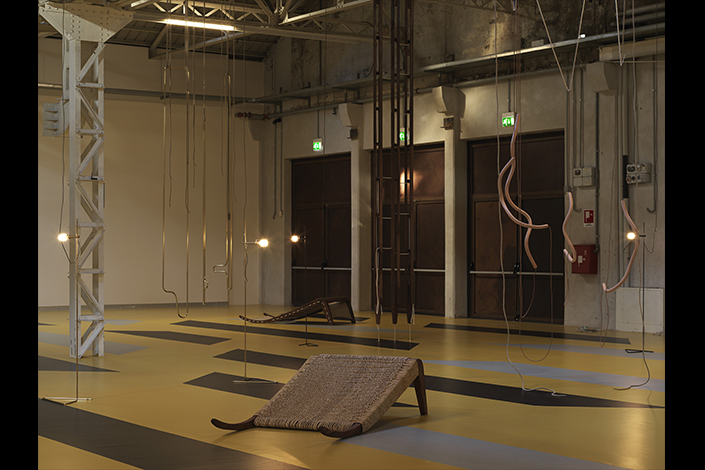 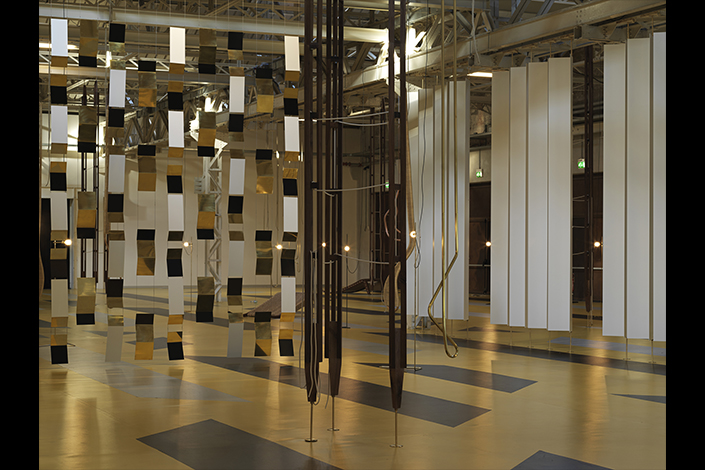 The exhibition is introduced by suspended modular elements that enhance the narrative devised for the show at Pirelli HangarBicocca. Made from brass painted black, green, ochre, white and gold, the alterated climbing form (I, II, III, IV) sculptures are inspired by an abstract relief by the British Constructivist artist Mary Martin. Based on Martin’s work Climbing Form (1954), which focuses on the merging of surfaces and geometric shapes, these four pieces are conceived as part of a single sculptural group that connects the exhibition space from ceiling to floor. Like a set of semi-permeable screens, consisting of brass elements held together by steel cables, the alterated climbing form series appears as a grid composed of geometric patterns, conceived as an element to measure and mark out the display area. Indeed, Antunes uses the grid to define a module and a unit of measurement, thus activating the setting according to a sculptural practice and guiding the visitor within the space. 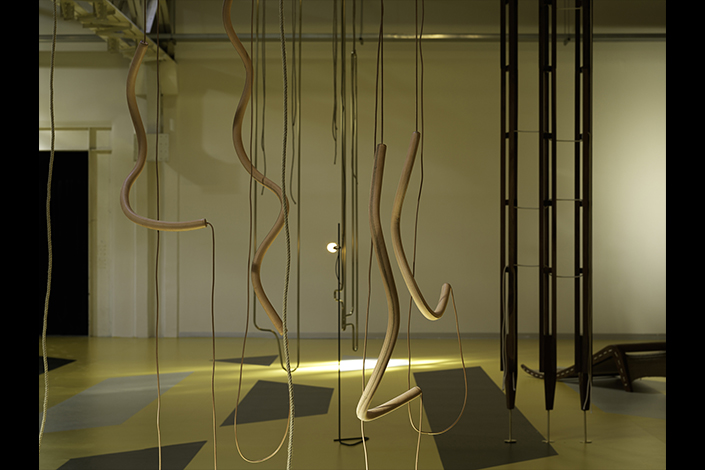 Alterated knot is a sculptural landscape composed by a series of suspended leather and rope works conceived as a set of longitudinal and transversal elements that inhabit the exhibition space. The sculptures recall the drawings made in the late 1940s by Anni Albers, depicting interwoven lines that converge at certain points to form knots, like a textile surface. Antunes transposes these forms into three dimensions, modeling a series of abstract sculptures based on the figures and the proportions of the original designs, which appear as flows of sinuous lines made from natural and industrial materials, including leather, rope, silicone, nylon, and aluminum. Just as Albers conceived weaving as a transposition of the technique of painting as a means to represent abstract shapes through a material—the yarn—that shapes its own expressive language, for Antunes the use of materials is crucial in defining the relationship between the theme of her investigation and the context in which the works are presented. 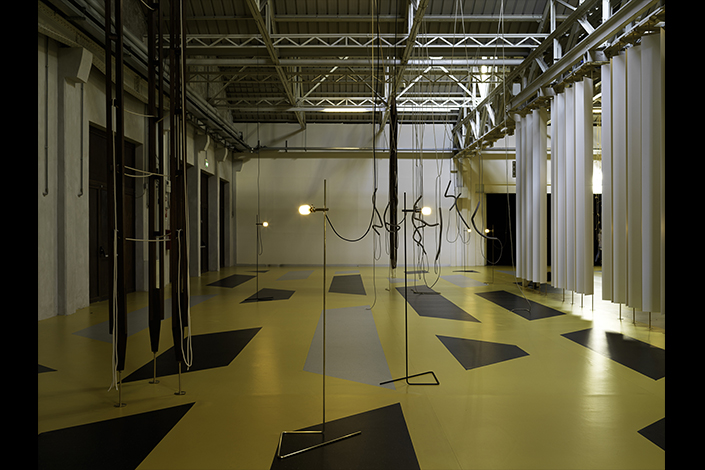 Antunes considers light as another sculptural medium to articulate space and time. Shunning all kinds of lighting systems not directly derived from the works on display, or from the environment with which they interact, she illuminates the Shed exhibition space with lamps that resound the architectural elements she focused on in her investigation of 20th-century design and architecture. The lighting designed by the artist for the exhibition establishes a relationship with the natural light entering through the skylights. The atmosphere and perception of the setting thus constantly depend on the intensity of the light coming from outside, according to the time of day and the season. 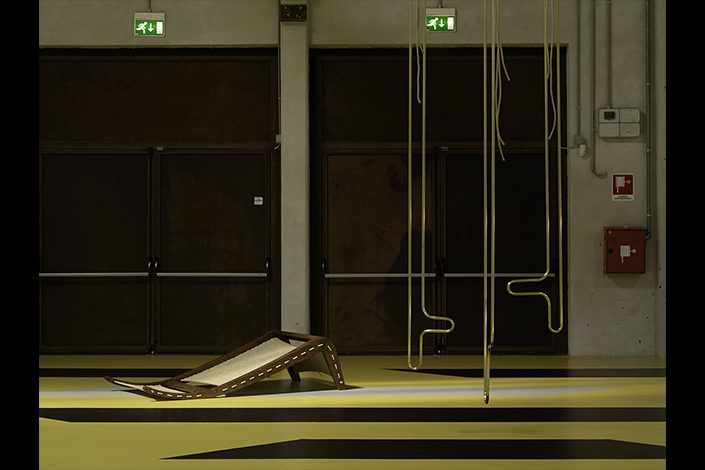 Consisting of sculptures that evoke another figure who silently inhabits the exhibition space, the Clara series is part of Antunes’ research into traditional materials and techniques in relation to Modernist forms. Indeed, the wooden and rope works arranged on the floor are inspired by certain details of chairs created by the Cuban designer Clara Porset in the 1940s and 1950s as modern interpretations of butaques, the traditional Mexican chairs introduced at the time of Spanish colonization.

Similarly to other works, for this series of sculptures Antunes has applied a process of abstraction in which the original objects are decontextualized from their initial function, in this case focusing on specific elements of the chairs that inspired her, increasing their scale. The artist’s intention here is not to document the original pieces of furniture, but to create a deep and complex sensory experience for the viewer.

A subject of great interest for Antunes, Clara Porset has already been the focus of two of the artist’s previous solo exhibitions: the recent “discrepancias con C.P.” at Museo Tamayo in Mexico City (2018) and “the last days in chimalistac” at Kunsthalle Basel (2013), to which the title of the exhibition at Pirelli HangarBicocca refers.

The same process used to create enlarged rods has been employed for another piece of furniture designed by Franco Albini in 1956: the iconic LB7 modular wooden bookcase with adjustable shelves and uprights fixed to the floor and ceiling. The versatility and adaptability of this shelving system—emblematic of Rationalist design—are embodied in its modular nature and extensibility, in both width and height of the shelves and the uprights. Using the latter elements, and repeating and enlarging the original proportions, Antunes has created shed, an aluminum and brass work, resembling a thick partition, which gives rhythm to the exhibition space that is connected vertically, uniting the linoleum flooring with the ceiling structure. 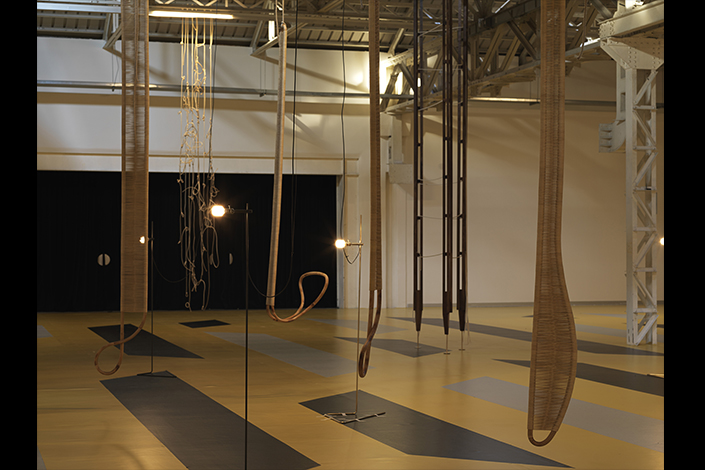 Antunes has created this new series of eight brass sculptures drawing on the same details of the rattan furniture by Franca Helg that inspired the artist for the Franca series. However, unlike her rattan works, which have similar abstract shapes, these works entail a process of assimilation of the original elements that not only regards the proportions of the details considered by the artist—once again enlarged and transposed out of scale—but also implies a change in the material used and consequently the crafting method. Due to its natural process of oxidation, brass marks the sculptures as elements mutating over the passing of time.