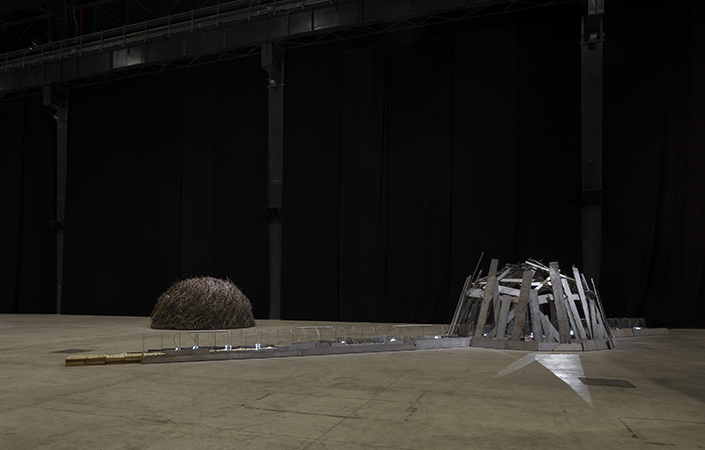 “Igloos”, an exhibition dedicated to Mario Merz (Milan, 1925–2003)—one of the most relevant post-war artists—brings together his most iconic group of works, the igloos, dating from 1968 until the end of his life. Curated by Vicente Todolí, and realized in collaboration with Fondazione Merz, the exhibition spans the whole space of the Navate of Pirelli HangarBicocca, placing the visitor at the heart of a constellation of over 30 large-scale works in the shape of an igloo: an unprecedented landscape of great visual impact.
A key figure of Arte Povera, Mario Merz investigates and represents the processes of transformation of nature and human life: in particular the igloos, visually traceable to primordial habitations, become for the artist the archetype of inhabited places and of the world, as well as a metaphor for the various relationships between interior and exterior, between physical and conceptual space, between individuality and collectivity. These pieces are characterized by a metal structure coated in a great variety of common materials, such as clay, glass, stone, jute, and steel—often leaning or intertwined in an unstable fashion—and by the use of neon elements and wording.
The exhibition provides an overview of Mario Merz’s work, of its historical importance and great innovative reach: gathered from private collections and international museums, the igloos will be displayed together in such a large number for the first time. 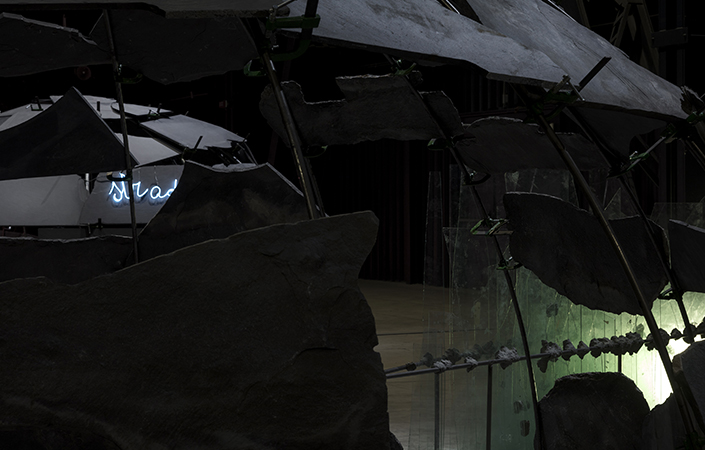 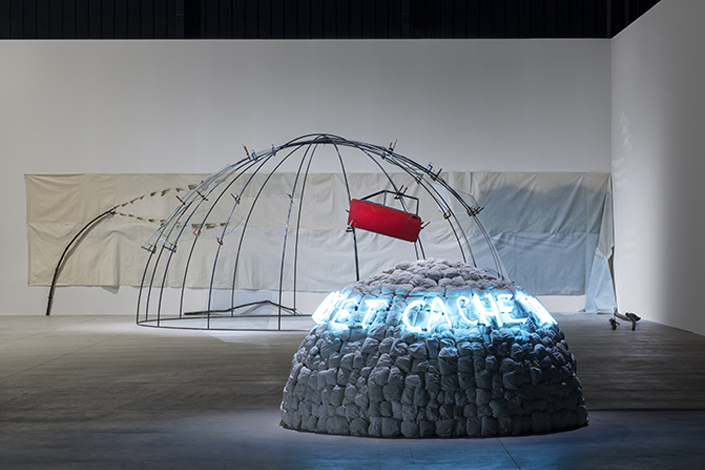 The work is a variation on the first igloo that the artist conceived in 1968 for the group exhibition at Galleria Arco d’Alibert in Rome. In that setting, Merz covered the hemispherical steel structure with blocks of clay wrapped in plastic bags and placed a white neon phrase on top of it, which said: Se il nemico si concentra perde terreno se si disperde perde forza Giap (“If the enemy masses his forces he loses ground if he scatters he loses strength Giap”), quoting the Vietcong general Võ Nguyên Giáp (1911–2013), the commander-in-chief of the Vietnam People’s Army, and symbol during those years of the struggle against Western imperialism.

The text, in the artist’s handwriting, spirals around the hemispherical surface of the work, giving it an existential, almost meditative significance. As Merz explained, «I didn’t make Igloo di Giap in 1968 because I thought that Giap represented a political solution, but because he had a sort of Buddhist perception of war and military life.»

The creation of works of this type introduced important innovations in Merz’s practice: the conquest of three-dimensionality through a close relationship with the surrounding architectural space, the use of socio-political mottoes that show the influence of the cultural climate of the period, and the unstable combination of radically different materials, such as clay and neon, to transform them via a process of abstraction. The Igloo di Giap on display at Pirelli HangarBicocca is the variation of the work made in 1970 for the “Conceptual Art, Arte Povera, Land Art” exhibition held at GAM in Turin, for which Merz applied the clay directly to the metal structure, revealing its textural qualities. 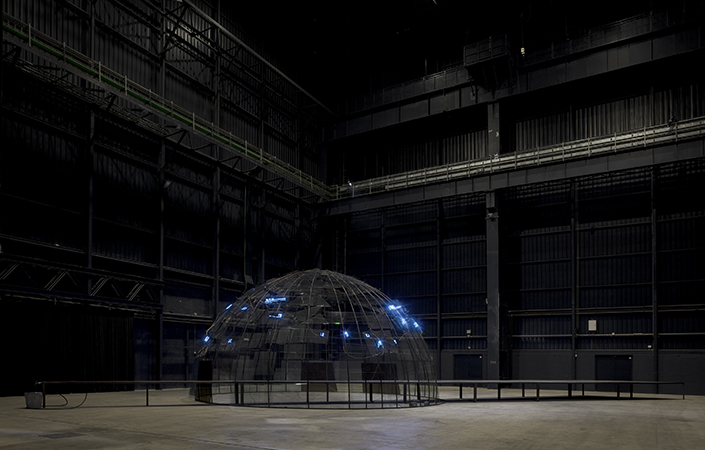 This work is part of the series of igloos which the artist has conceived since the early 1980s and presented inside very distinctive architectural settings—in this case the CAPC musée d’art contemporain de Bordeaux, a former warehouse for colonial goods.

La goccia d’acqua is the largest igloo that Merz ever made for an indoor space. Measuring 10 meters across, the hemispherical metal structure is entirely covered with panes of glass of various sizes dotted with neon numbers. The work is made even more imposing by a 26-meter-long triangular table that runs right through the igloo and whose end is fitted with a tap, from which water rhythmically drips into a bucket.

The work also highlights Merz’s constant interest in science and the laws of physics: «In physics, the phenomenon of the drop of water is explained using the notion of “surface tension”. This tension is the force of cohesion that holds together a drop of water or a drop of mercury. It is not possible to understand my igloos without this concept of surface tension, which distinguishes inside from outside. This phenomenon is so important for me that I have entitled the biggest igloo that I have built so far La goccia d’acqua. In the igloo, internal space and external space are equivalent.» 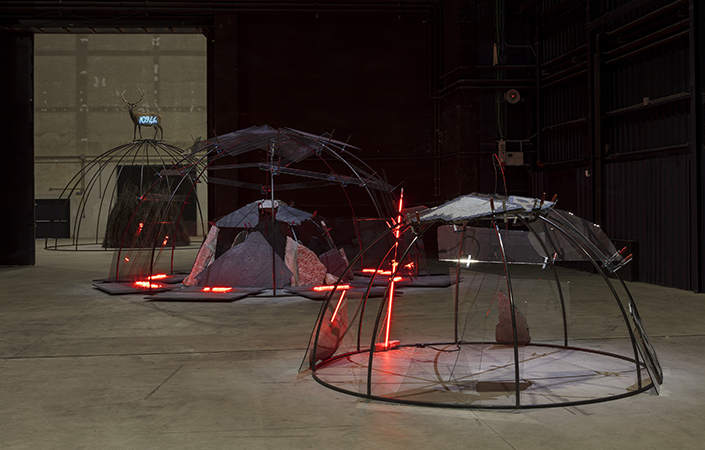 Like Acqua Scivola, this work is also made from glass, which became a recurrent constructional feature of Merz’s igloos. The artist used broken panes of glass, attaching them to the steel structure with glue and clamps—the latters, tools used by metalworkers and craftsmen—introducing a reference to the worlds of industry and work.

Inside the igloo is a typewriter used by Merz and Emilio Prini (1943–2016) for a performance during which the two men sat inside the igloo reading, writing and speaking, effectively making it a place for living and relating to others. The space of the work thus becomes a room in which everyday activities are performed and through which the artist redefines the boundaries between inside and outside, and between art and life.

The title introduces a further level of meaning and refers to some of the artist’s thoughts on space and architectural principles of construction, highlighting the way in which the flat surface of the rectangular pieces of glass follows the igloo’s curved form.

If the hoar frost grip thy tent Thou wilt give thanks when night is spent, 1978

Language and the written word represent another crucial aspect in Merz’s poetics. If the hoar frost tent grip thy Thou wilt give thanks when night is spent is emblematic of the artist’s interest in poetry and literature, and particularly of his deep knowledge of the work of Ezra Pound (1885–1972). The phrase is taken from The Pisan Cantos, written by the American poet while he was imprisoned in a camp near Pisa in 1945. The quotation “If the hoar frost grip thy tent / Thou wilt give thanks when night is spent” is written in the artist’s handwriting, in blue neon around the entire circumference of the igloo, which is covered with a metal mesh that allows the internal space to be glimpsed. Merz pays tribute to the poet by embodying the phrase in a script that recalls the transient and precarious nature of the human condition. 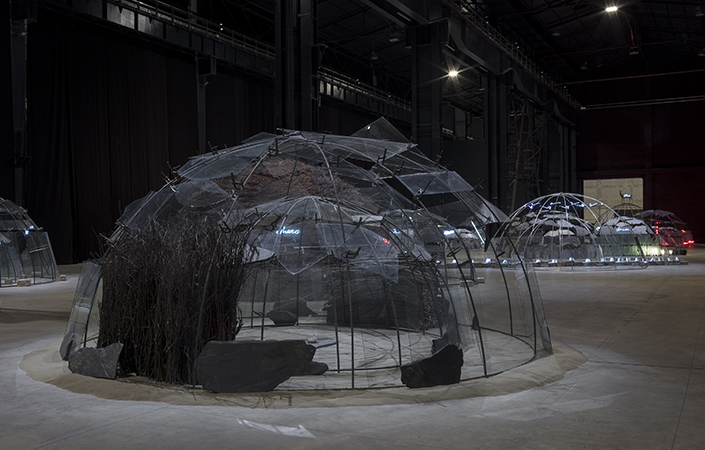 Hoarded centuries to pull up a mass of algae and pearls, 1983

Already in its title, this work recalls Ezra Pound, whose oeuvre as Merz himself declared, «has a powerful poetic influence on my work; many of my thoughts are still derived from his thought.» Internally, the double igloo is composed of a metal mesh “painted” with a layer of sulfur, while the exterior is covered with panes of glass secured by clamps. In this work Merz focuses on the concept of time and his circular vision of temporality. Indeed, Pound’s phrase evokes a stratified time and elements (algae and pearls) that belong to history before the appearance of humankind. The use of sulfur conjures up an archaic dimension, as it is a mineral present in the deepest layers of the earth, but it is also extracted and processed by humans for various purposes. 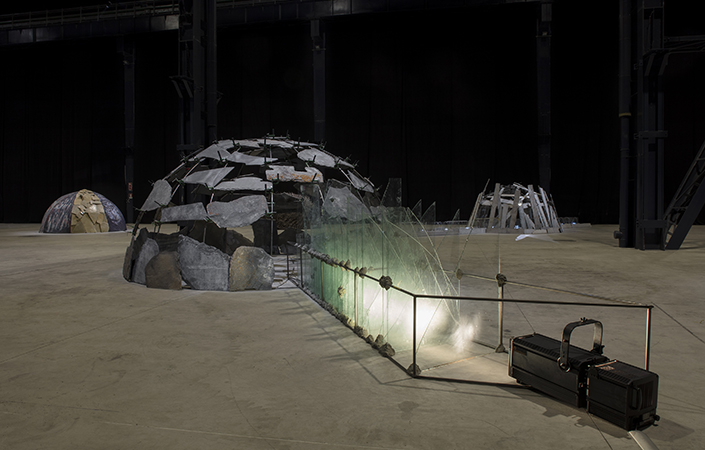 This work is unique in its use of a lamp that projects a beam of light, which is propagated through the long row of broken glass panes. The light becomes dimmer inside the igloo, which is made from stones held together by clamps. The work embodies a crucial question for Merz in relation to the experience of the architectural space and physically enacts the perception of distance: «There were also dusty panes of glass, found at a glazier’s, which I framed with glue. The glue made them into a very heavy type of material as opposed to the concept of glass, which is light and transparent. The light positioned behind this stack of glass panes softened them and at the same time became very distant.» 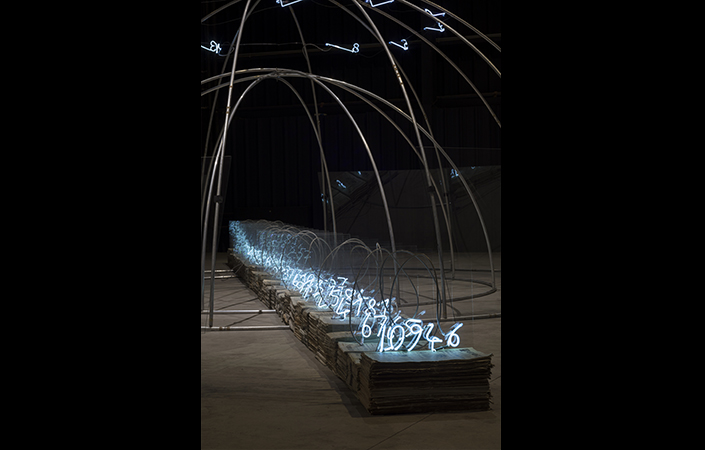 Made for his solo exhibition in Zürich in 1985, Senza titolo is composed of two igloos intersected by a long row of stacks of newspapers and interspersed with panes of glass, on which neon Fibonacci numbers are arranged. Both glass fragments and numbers are also positioned on the outer structure of the igloo and generate multiple references between the hemispherical forms and the longitudinal row, thus creating the illusion of continuously expanding trajectories. The artist explained the choice of this media: «I use stacks of newspapers not because they form cubes, but because they are a reproduction of a series of words and thoughts, a series of the same newspaper.» 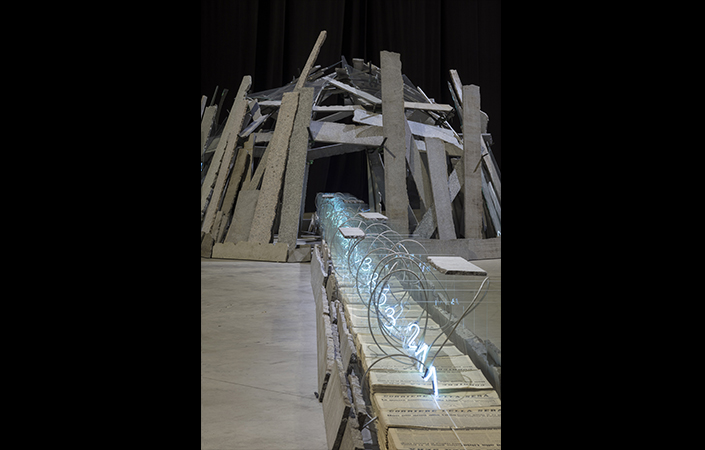 In this work, Merz once again uses newspapers as a medium, here employed to express the idea of the transmission of information. Realized for the 17th Milan Triennale, Sentiero per qui is composed of an igloo made from metal, stones, and glass intersected by a long “path” of newspapers made from piled copies of the Corriere della Sera. The newspapers become a further manifestation of the concept of progression, reinforced here by a Fibonacci sequence, from 1 to 233, that runs along the entire row. This proliferation is expressed through a material associated with industrial society to create «an authentic modern landscape.»

Stone is another recurrent natural element of the igloos realized during the 1990s. In this case, Merz creates the work by arranging slabs of stone vertically and horizontally, producing a form that recalls the concept of house and shelter by employing a material that is traditionally used for houses.

In this work the artist has arranged squared slabs of white marble one on top of the other, leaving only a few areas empty and conveying a sense of instability. The elements are connected by a Fibonacci sequence that runs vertically over the dome, evoking the concept of the terrestrial coordinates of longitude. 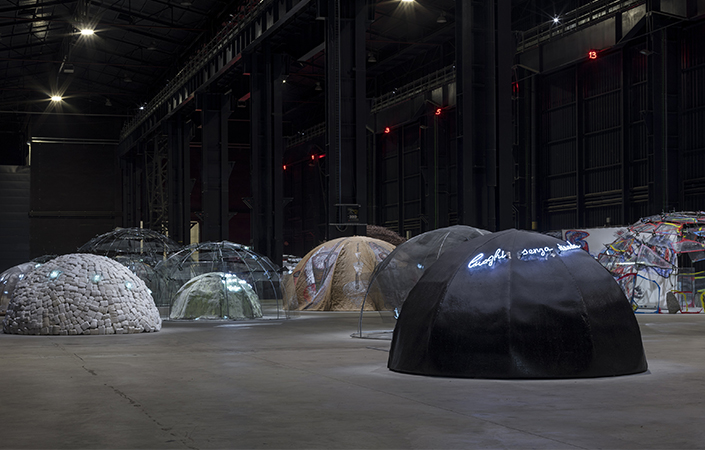 Merz revives the poetic expression Luoghi senza strada (“Places without streets”), writing it in blue neon on the igloo covered with black slabs of slate and granite. Consequently, visitors have to walk around the work to read the writing, making a mental action physical.

This metal and glass igloo precariously rests on rectangular stone slabs arranged in a circle on the floor. Red neon words are placed on each of the slabs, forming the writing Le case girano intorno a noi o noi giriamo intorno alle case? (“Do we go around houses, or do houses go around us?”), a recurrent question in the artist’s poetic. Inside is a second igloo made from different types of stones laying on the floor or supported by clamps in the upper part of the structure. 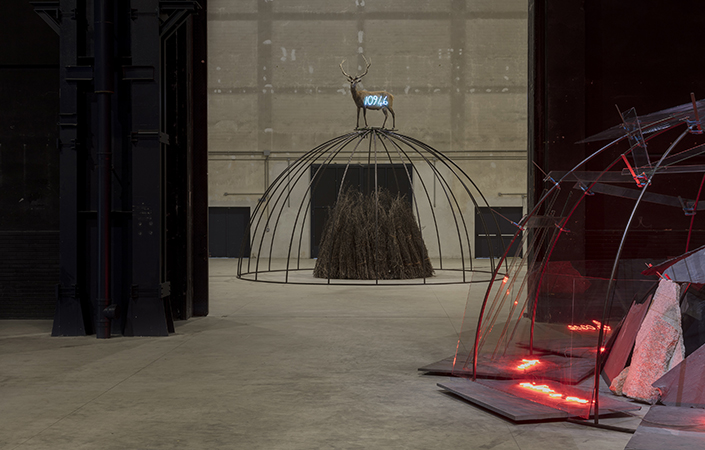 Animals are a recurrent theme of Merz’s poetics and also feature in the vocabulary of the igloos. Their symbolism evokes an archaic and primitive dimension. In the case of Senza titolo (doppio igloo di Porto), made for his solo exhibition at the Fundação de Serralves in Oporto in 1999, the artist created the piece for the museum park. The work directly refers to the natural environment through both the use of bundles of twigs arranged vertically on the internal igloo, and the imposing presence of a stuffed stag on the top of the second structure, on whose side a neon Fibonacci number—10946—intensifies the expressive power of the installation.