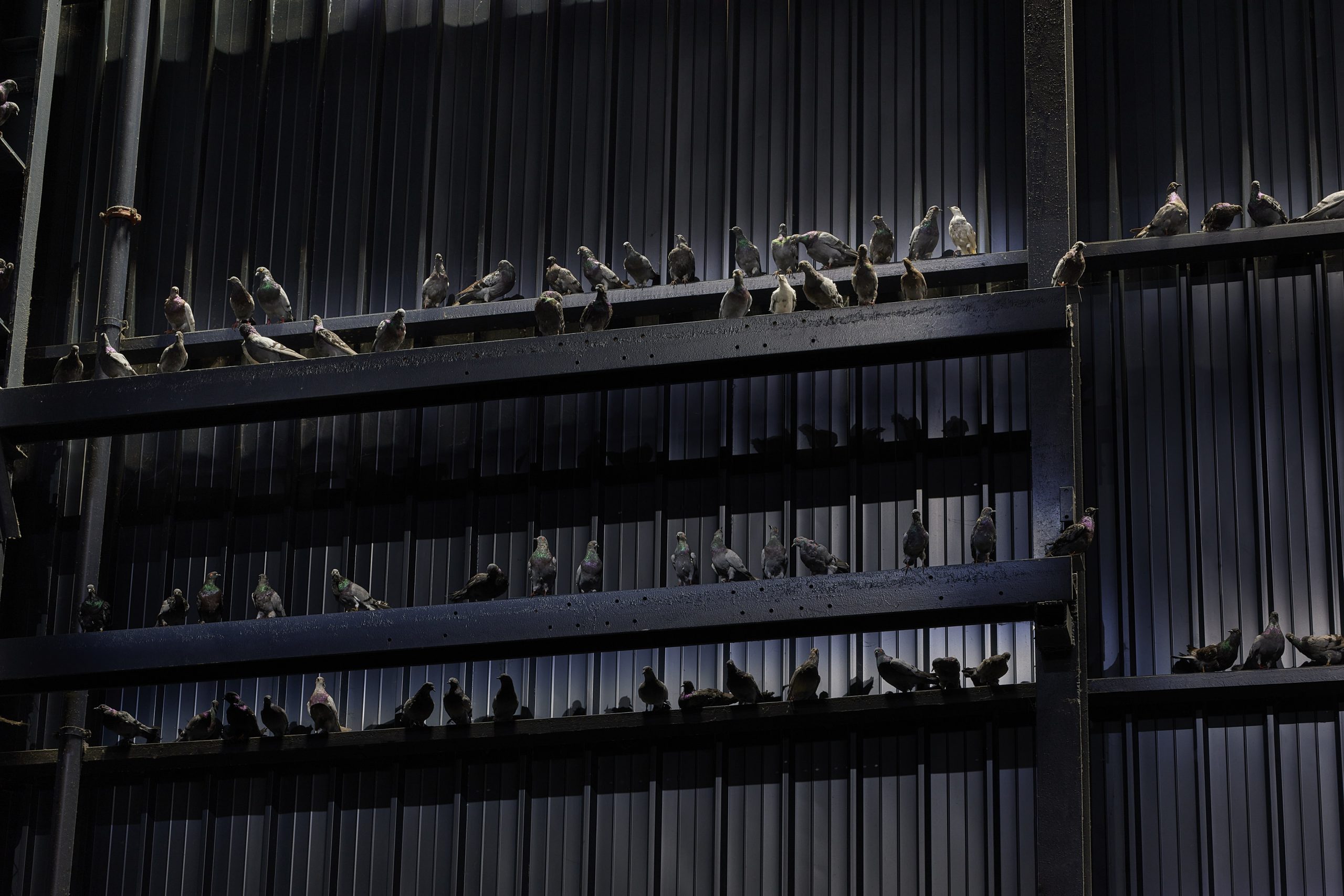 “Breath Ghosts Blind” has been conceived as a dramaturgy in three moments that unfolds in close relationship with the architecture of Pirelli HangarBicocca. The three acts find their counterparts in the monumental, adjacent spaces of the Piazza, the Navate, and the Cubo. Following one another, they articulate the exhibition layout like film frames or the acts of a theater performance. Marking Cattelan’s return to Milan after more than a decade, the exhibition presents a project the artist has been working on for a long time. The title encloses the names of the pieces on display: Breath (2021), a previously unseen marble sculpture that opens the exhibition; Ghosts (2021), a reconfiguration of an earlier work that transforms the space of the Navate; and Blind (2021), a new monumental installation. The three artworks appear as moments of a symbolic representation of the cycle of life from birth to death, through emblematic references belonging to the collective imagination that call into question the current system of values and offer a deep reflection on the more disorienting aspects of daily life. 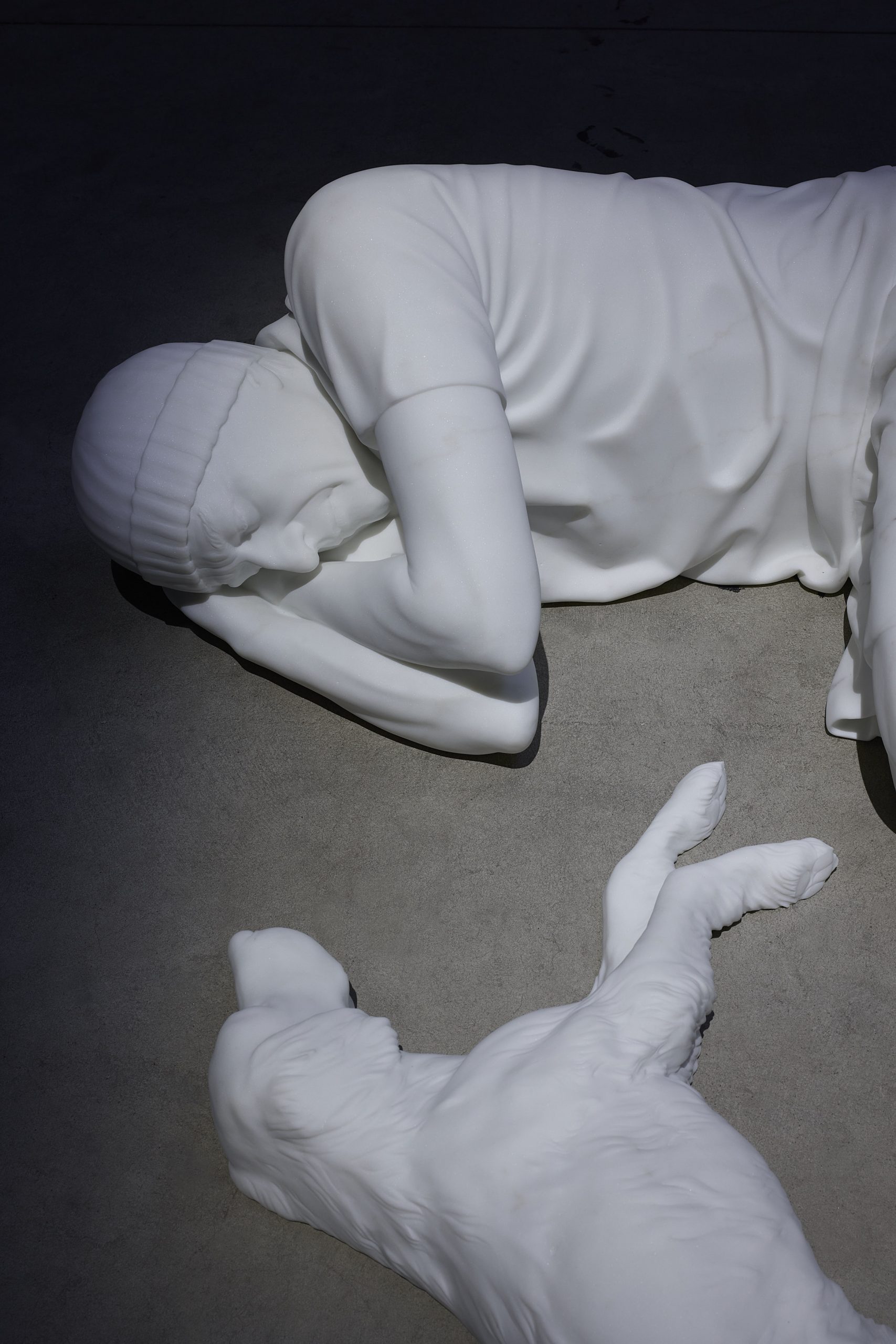 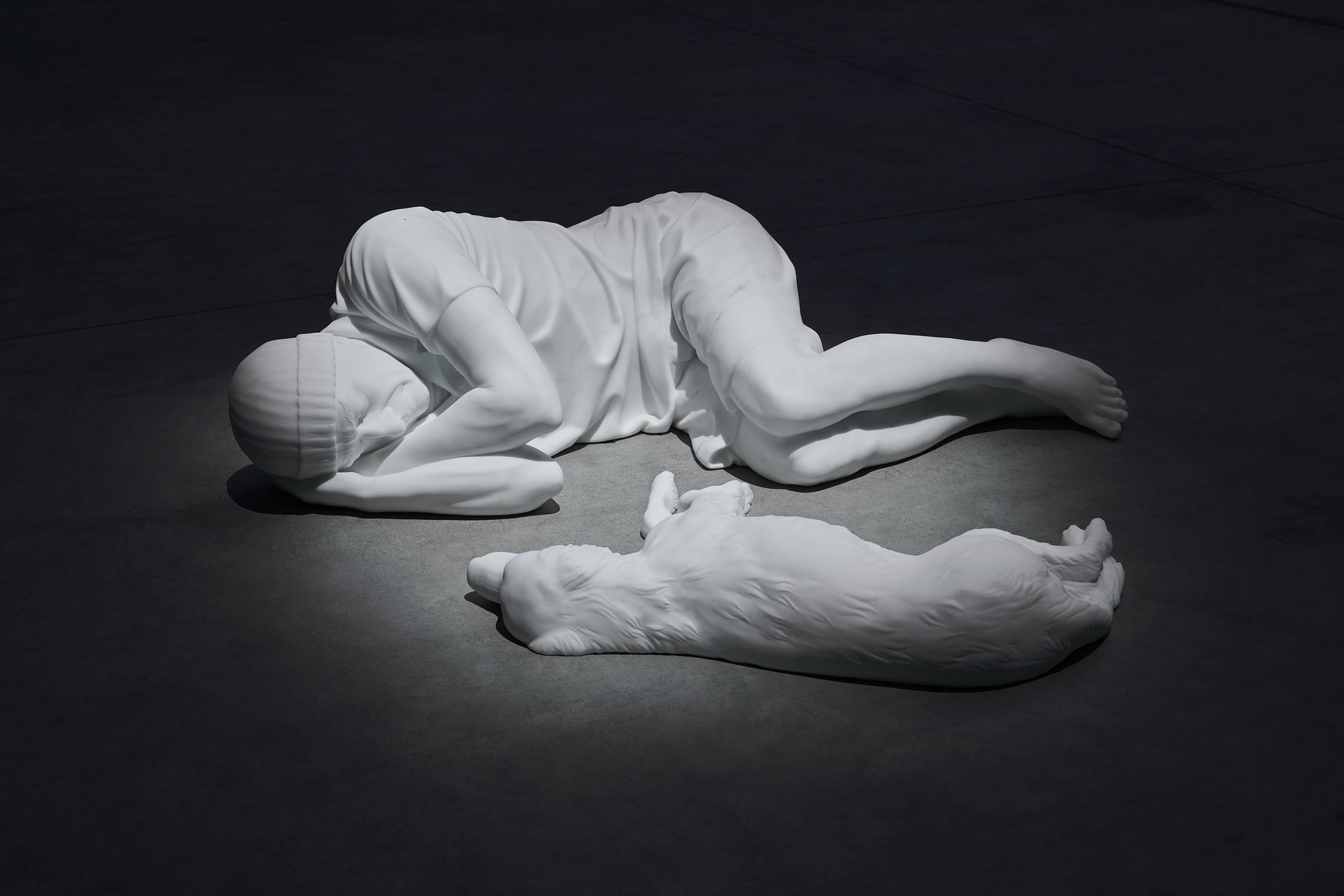 The sculpture that opens the exhibition in the Piazza at Pirelli HangarBicocca hints at a silent dialogue. Created with a noble material—white Carrara marble—, the work depicts a human figure and a dog lying on the ground on one side, facing one another. Apparently unconscious, the person is in a fetal position. The posture of the bodies suggests a possible link between the two. However, the artist leaves the nature of this relationship uncertain: the viewer does not know whether this situation is the outcome of an accidental or preexisting encounter. 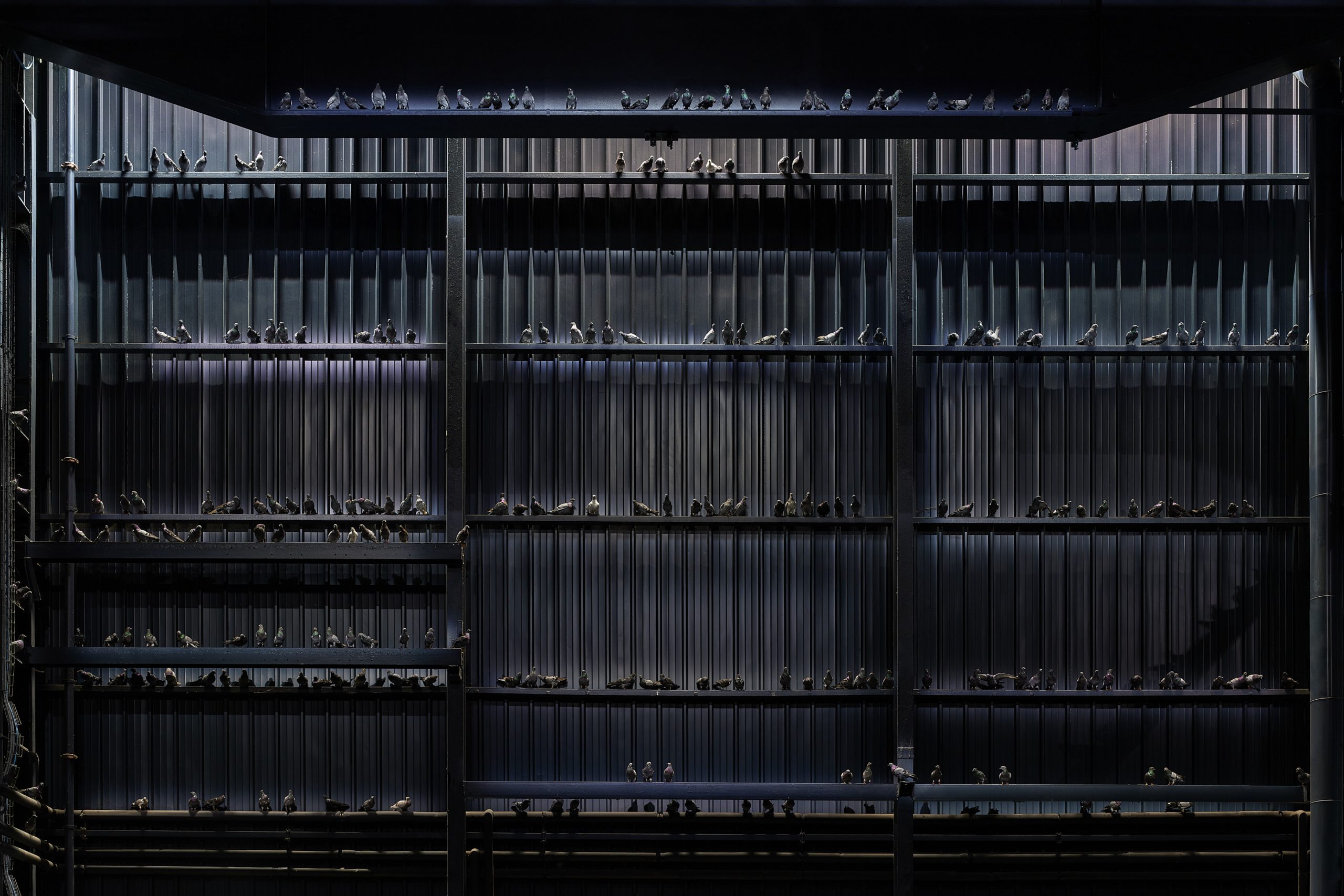 Thousands of taxidermied pigeons are scattered along the Navate individually or in groups, arranged on the rafters that support the roof or dispersed in the gaps between the pillars and walls of the building. They “observe” from above the movements of the visitors looking at them. Impassive and eerily calm onlookers, pigeons are a habitual feature of the urban landscape and their presence in the exhibition space imparts a feeling of restlessness. Far from the visitors, the birds seem to loiter in the nooks and most anonymous places of the formerly industrial architecture of Pirelli HangarBicocca; suggesting a reversal between the inside and outside, they mark the confines of the museum and transform it into an urban environment that abounds with life. 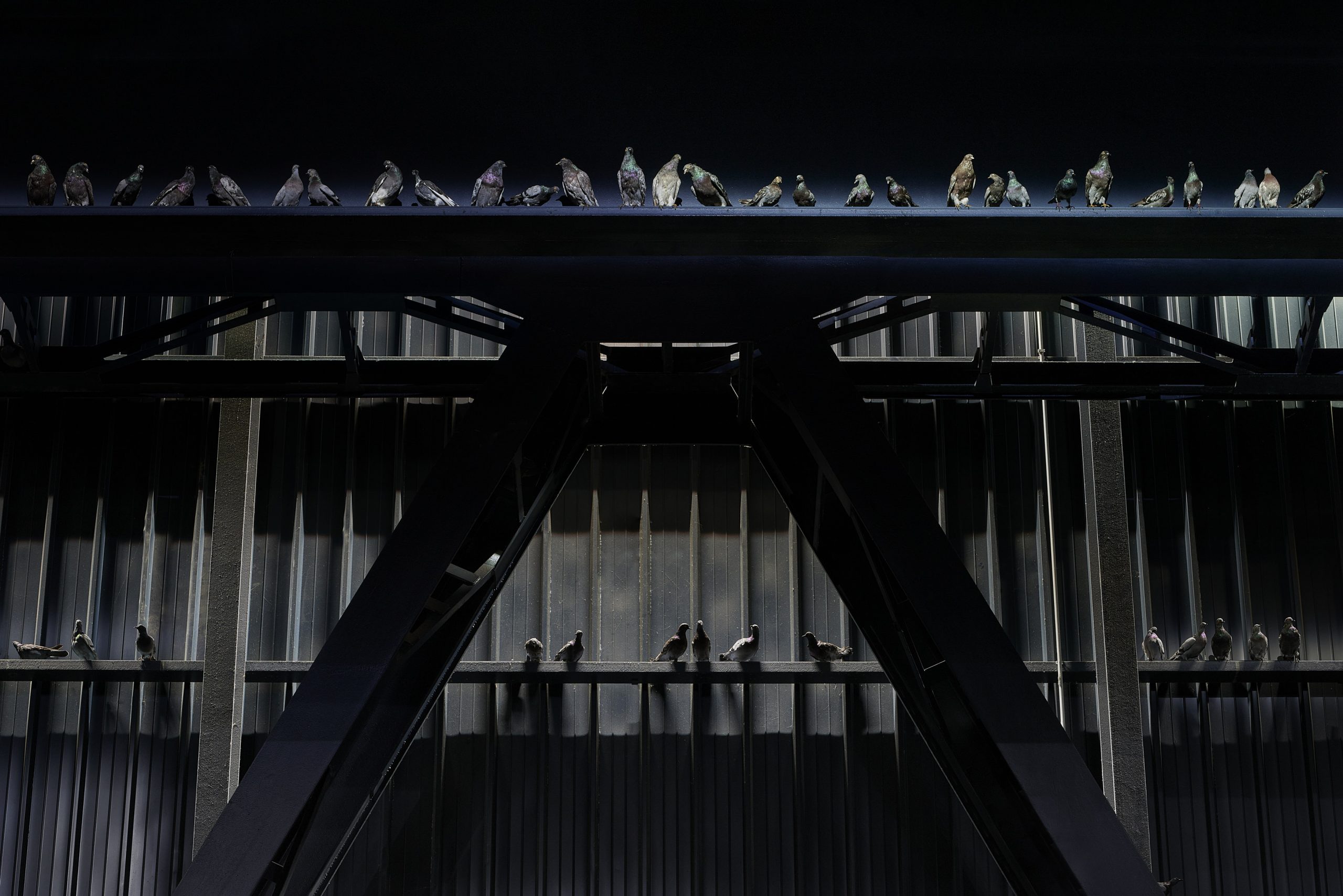 Considered together, the pigeons also suggest an indistinct crowd, the colonizers of a space that they claim through the silent power of their presence, establishing a strong sense of community and belonging. Therefore, in a set of reversals the observers become the intruders in the room and are confronted with their own individuality. The distressing experience impressed by the work has, in its previous versions, been compared with the iconic final sequence of Alfred Hitchcock’s 1963 film The Birds, in which the cawing of crows and squawking of seagulls is replaced by the unreal silence of the flock of pigeons. The landscape of the Navate may evoke other Hollywood images, among which the dismal atmospheres of the streets of Tim Burton’s Gotham City, suggesting scenes of the margins of society. 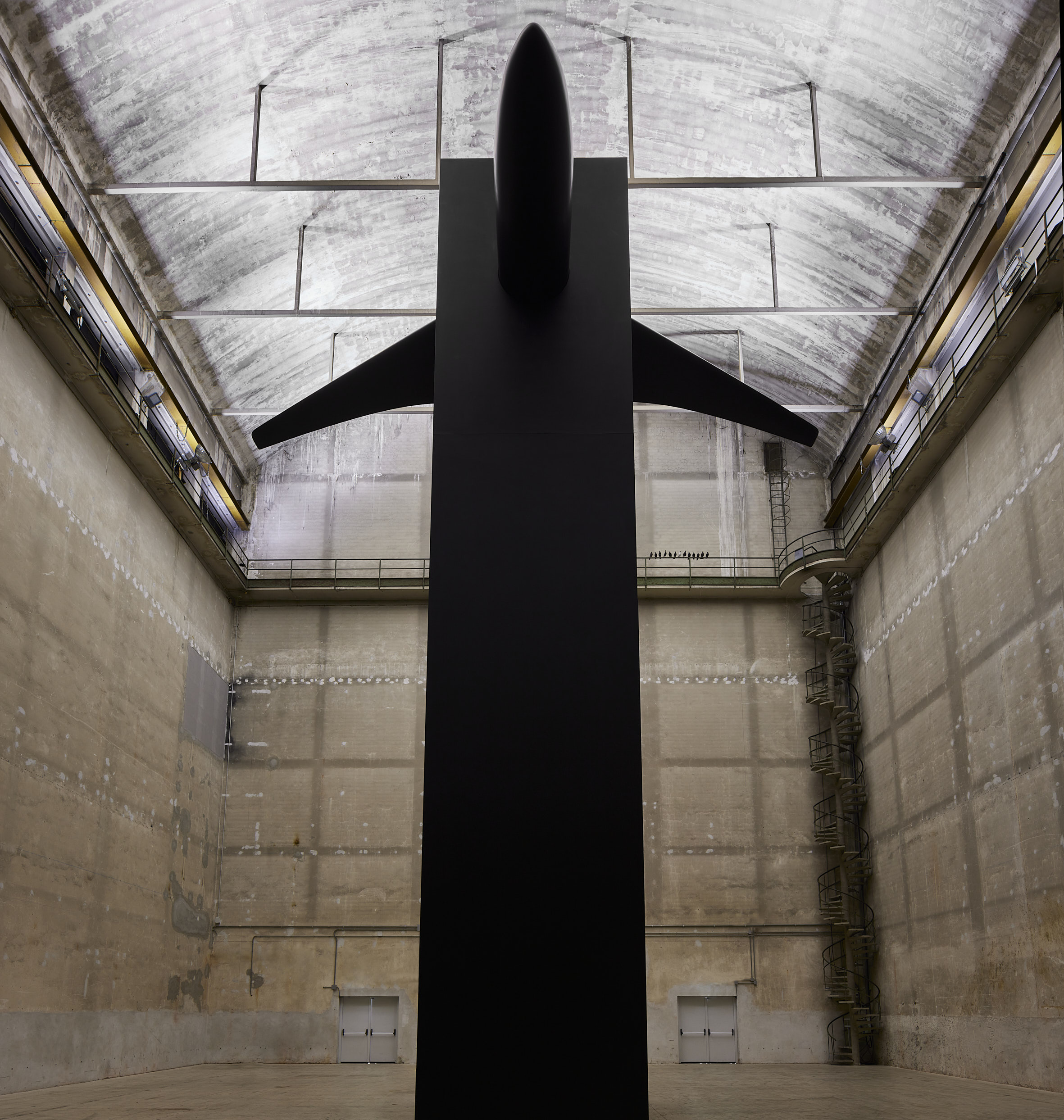 This monumental new work is presented to the public for the first time on the occasion of “Breath, Ghosts, Blind”. Installed in the Cubo, Blind gradually reveals itself as a monolith from the Navate area—as visitors approach and cross the threshold of the space, it unveils the outline of an airplane intersecting it at its top, both elements made from resin and in matte black color. Seen from below, the imposing installation induces the feeling of being overwhelmed and dominated. The sentiment of vulnerability and fragility prompted by the sculpture recalls the awe or amazement that one may feel when passing in front of religious buildings like cathedrals and minarets. The correlation with an experience of a spiritual and solemn nature is heightened by both the shape of the work—a cross when seen in plan view—and the silence that pervades the exhibition space. 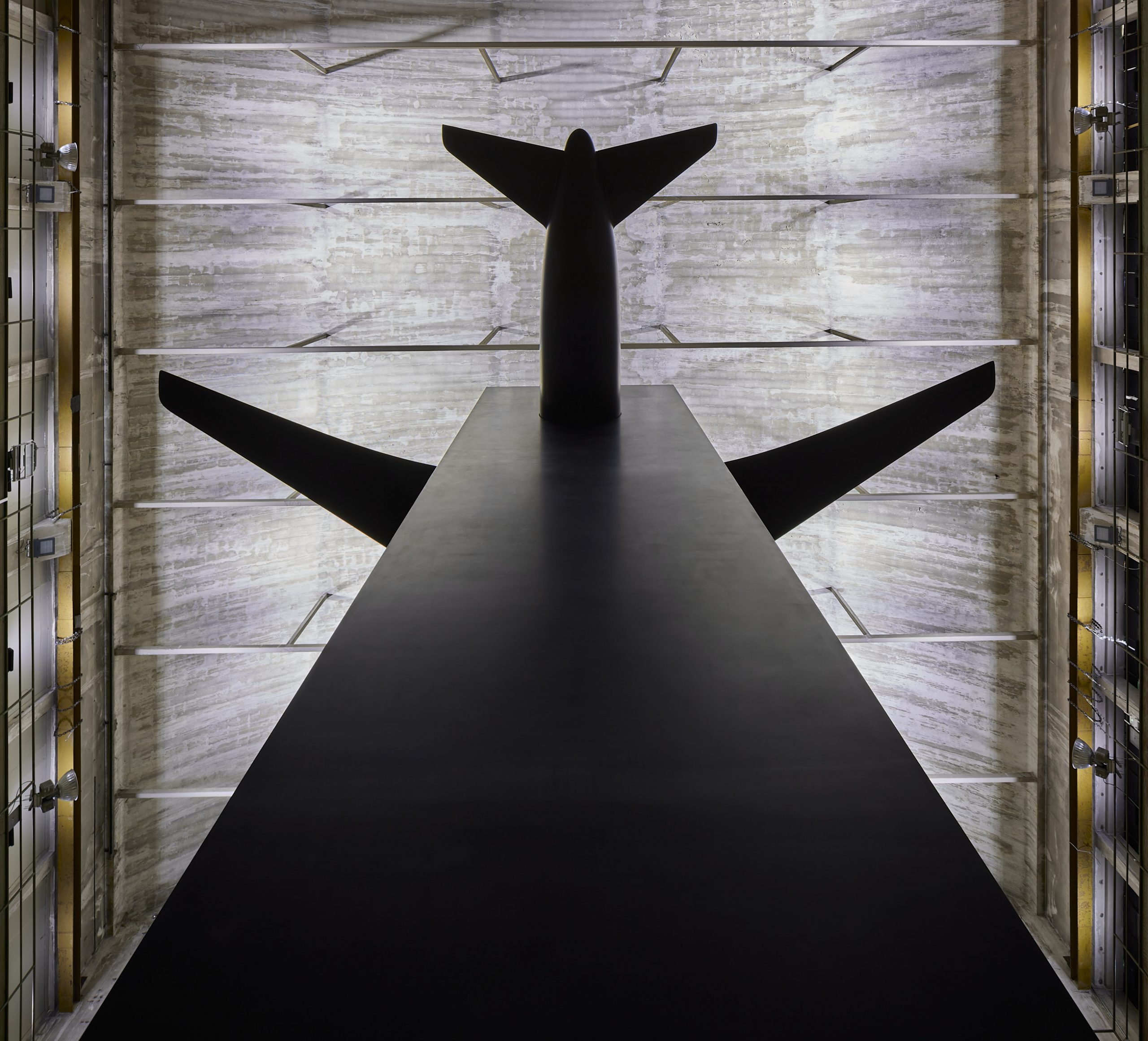 Blind inevitably alludes to the attack of September 11, 2001, and offers a synthesis of it, a single tower, as if the plane had become one entity with the building. Developed over several years, the work resumes and amplifies some of the key themes in Cattelan’s practice. First and foremost, a reflection on historical events, including terrorist attacks, which he has already addressed in Untitled (1994), Lullaby (1994), and Now (2004), that refer respectively to the kidnapping and execution of the Italian politician Aldo Moro in 1978, to the Mafia attack on the PAC – Padiglione d’Arte Contemporanea in Milan (1993), and the assassination of John F. Kennedy in Dallas (1963). Blind also continues the artist’s exploration of death, which he often epitomizes with direct and iconic features, like in All (2007), made of nine marble sculptures representing the profiles of anonymous corpses each overed with a sheet. From this perspective, Blind appears as a gigantic headstone, a memorial to the fallen. Similar to L.O.V.E. (2010), installed in the middle of Piazza degli Affari in Milan, it calls into question the value and significance of a monument: while the two works convey the idea of monumentality on account of their size, they also undermine it by creating a tension between conflicting forces and symbols. 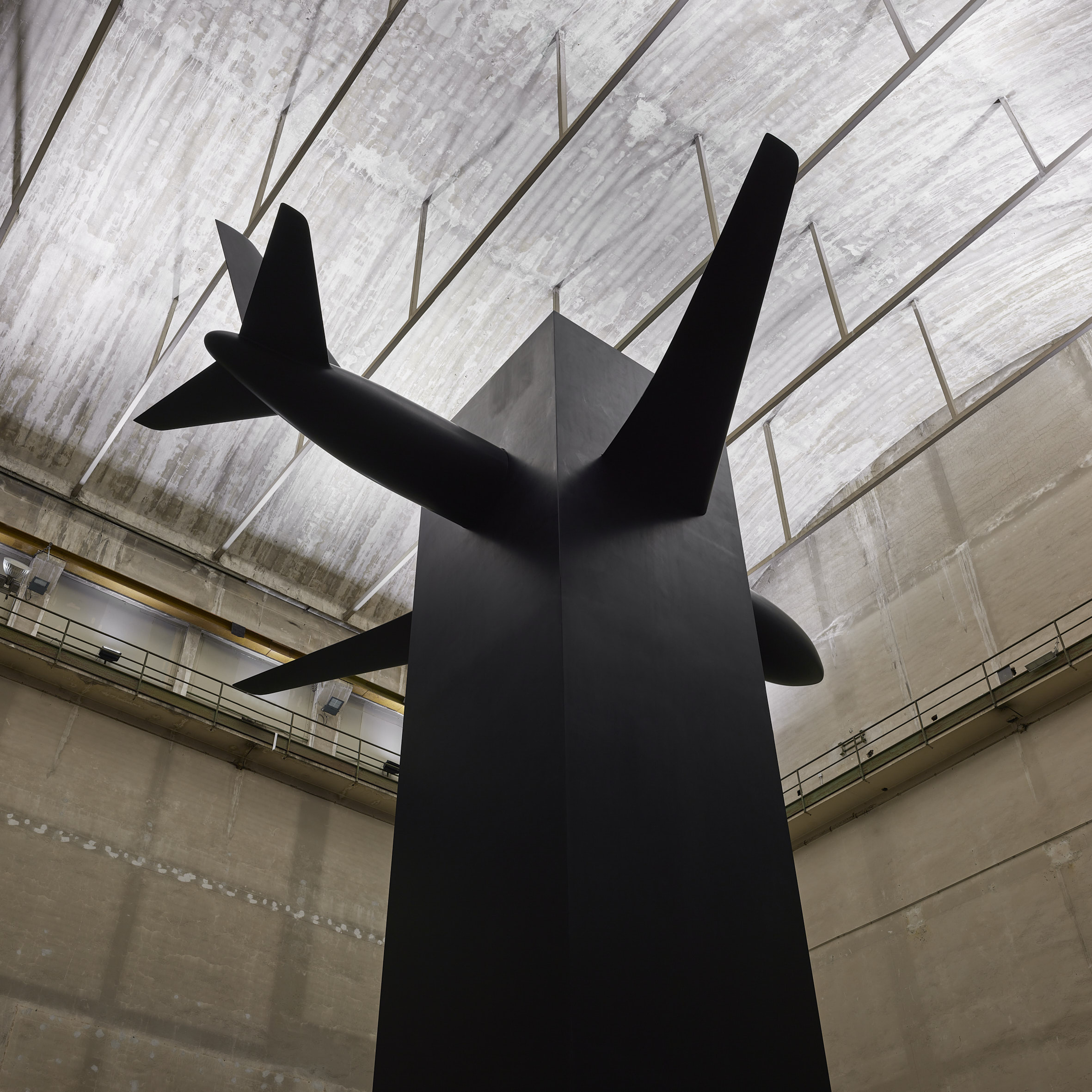 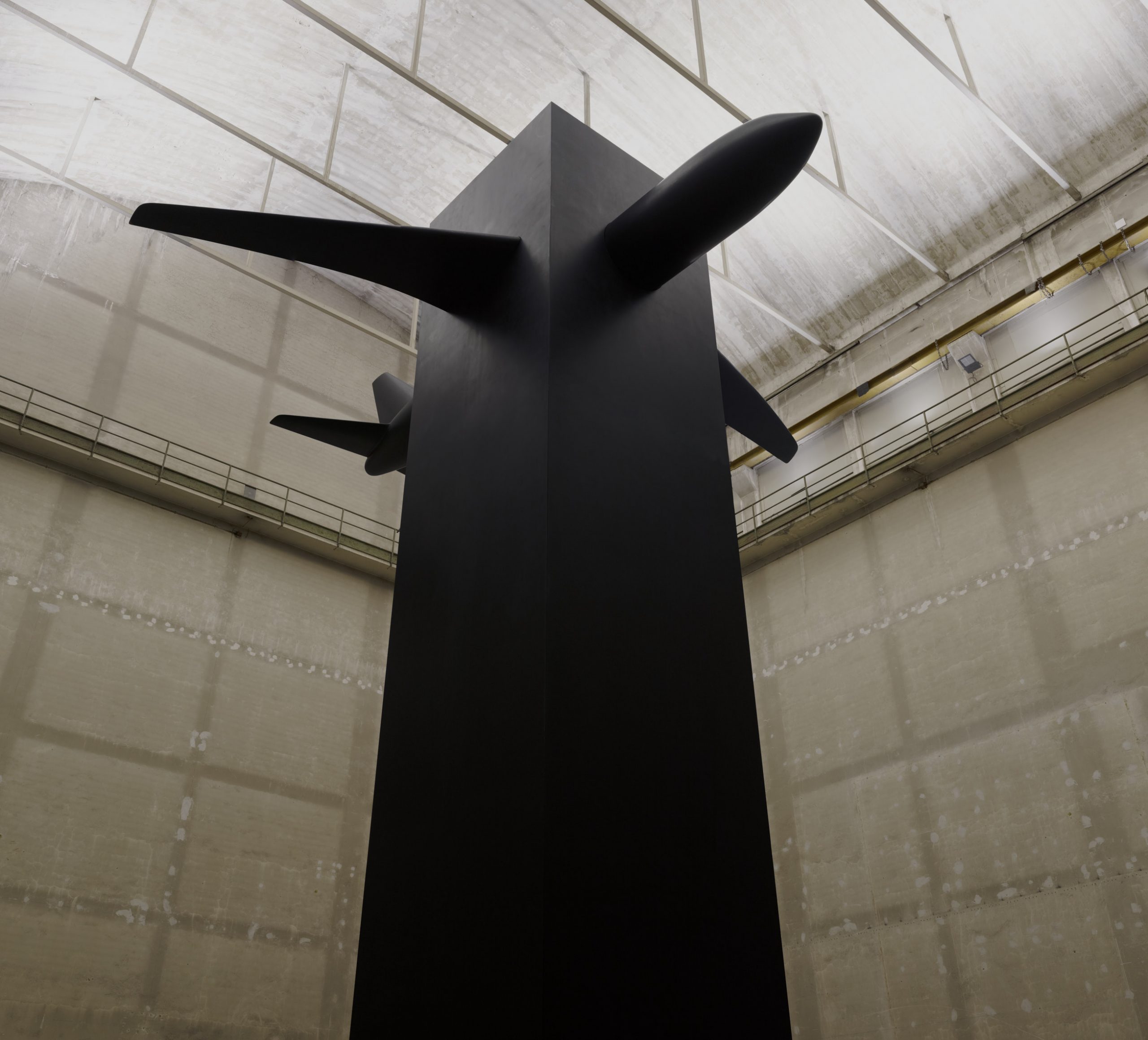 With Blind, Cattelan crystallizes a moment that in just a few minutes caused the physical and symbolic collapse of an icon of New York City that had attracted the attention of other artists since its construction, such as high-wire walker Philippe Petit that in 1974 walked on a steel cable between the Twin Towers, suspended in the void. On this occasion as well, Cattelan appropriates once again a paradigmatic image by transforming it into a new symbol. In his intention, Blind goes beyond the events of that day: the episode and its resonance take material form in a work that becomes a memorial to a moment of shared pain and collective loss. Its plasticity may evoke other monuments to tragic historical events—such as the sculptural group of three public works of 1938 by Constantin Brancusi in Târgu Jiu in Romania, which pays tribute to the heroes of the First World War, and Peter Eisenman’s Holocaust Memorial in Berlin, realized in 2005—but Cattelan proposes a different concept of memorial that unites abstraction and figuration. Finally, the title Blind also suggests another level of interpretation, insinuating doubt about exactly who it is that is unable to see, perhaps alluding to humanity in our current state.