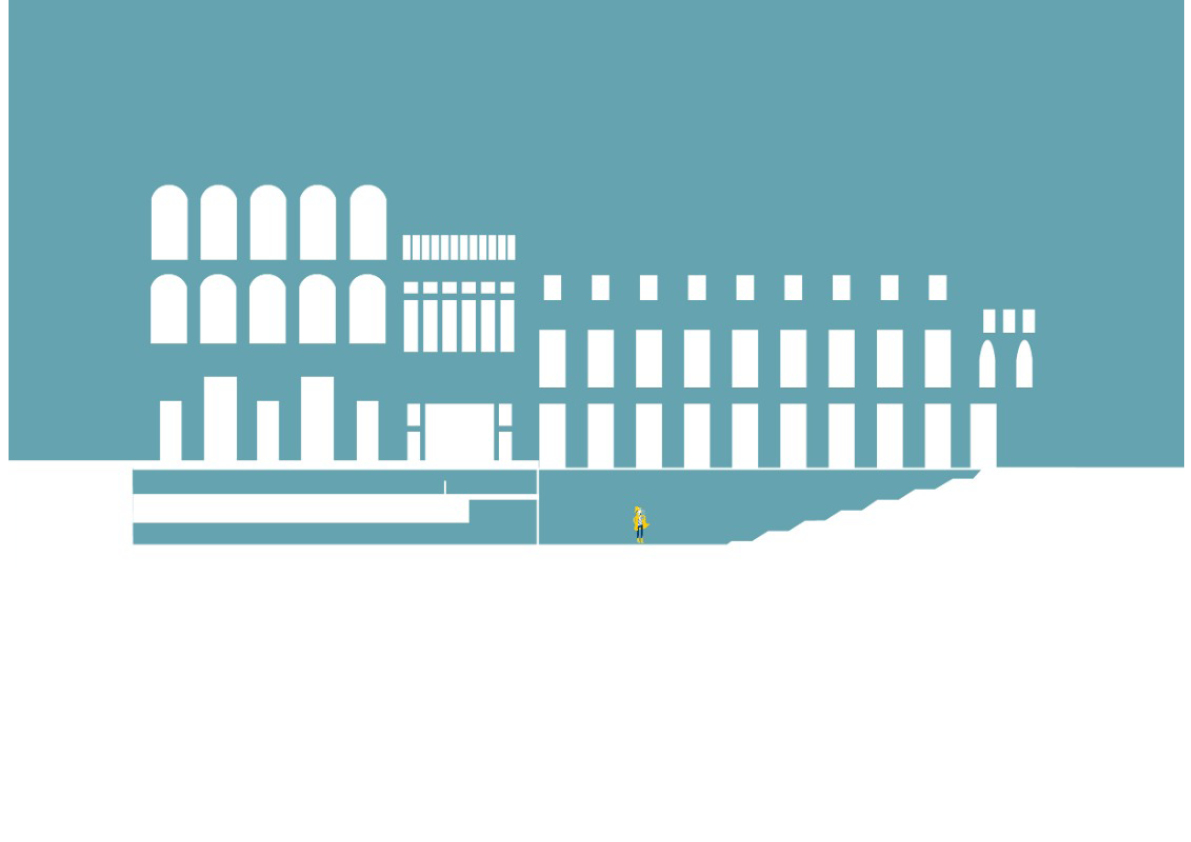 The Municipality of Milan announces an international design competition, with an open procedure, for the reconversion and annexation of the building facing Piazza Del Duomo, called “Secondo Arengario”, to the visit path of the Museo del Novecento, with the aim of creating a unique large exhibition complex dedicated to modern and contemporary arts, whose standard for collections, exhibition spaces and services places it among the most innovative museums on an international level. 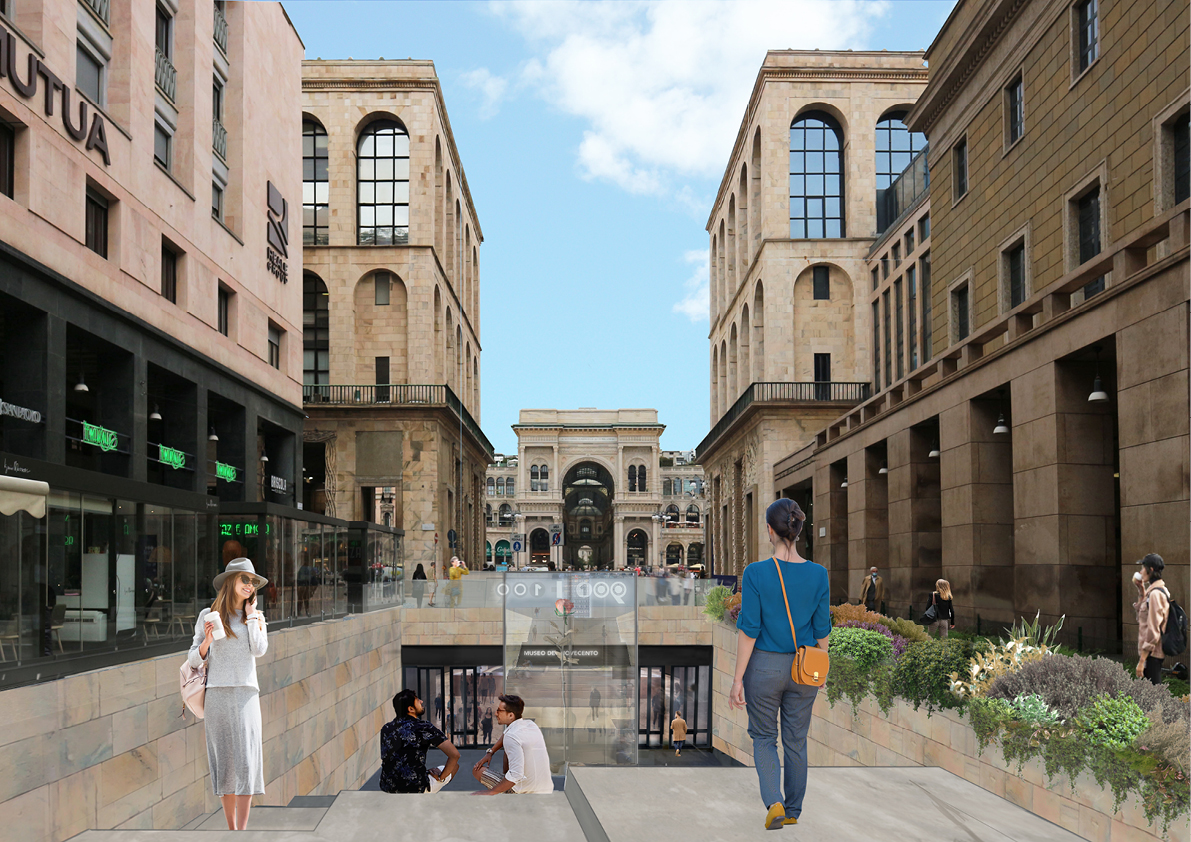 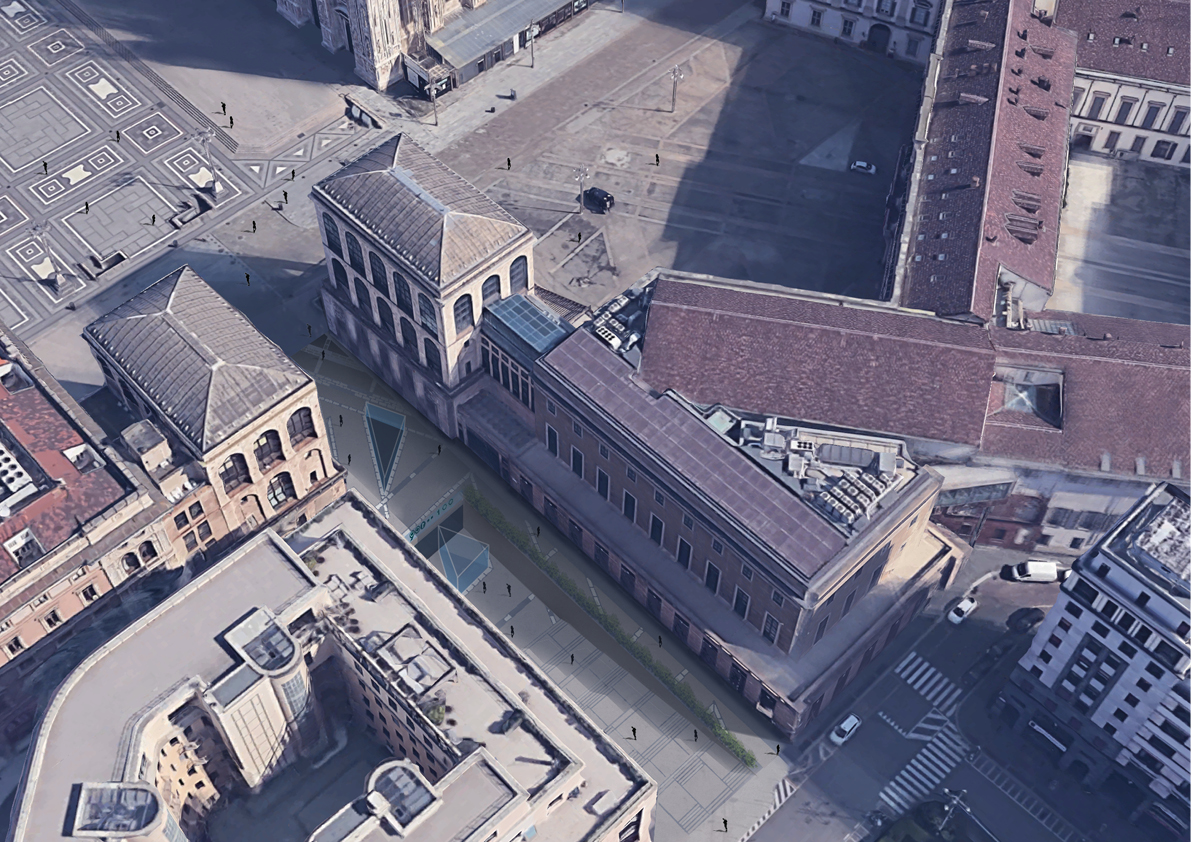 The new layout of the area, free from the tramway infrastructure, makes possible an unconventional use of the space in front of Milan: by lowering the floor level to -7.50 m, we open a new underground entrance to the Museum. The new connection, at the level of the basement of the first Arengario, allows the two museum sites to be connected with the advantage of preserving visual continuity with the perspective axis aligned with the Vittorio Emanuele Gallery. This simple but decisive intervention outlines a new urban environment that is no longer a space of passage, but becomes an authentic public place of contemporary reference for the city. The new connecting volume that is obtained in the subsoil, naturally illuminated by large prismatic glass cases, and which connects the two Arengari houses the new entrance with the ticket office and the bookshop, contributes to expanding the exhibition spaces, distributes the incoming flows and at the exit, thus guaranteeing functional separation between the sight and service paths. The volume occupies the entire section of the two twin buildings, transforming the stretch of via Marconi between via Dogana and via Rastrelli into a pedestrian square. The intervention alternates operations of subtraction and addition: excavation of the road section between the building in line that stands on the first Arengario and the building facing it, construction of a staircase from via Rastrelli, addition of two small hypogeal lateral volumes used for host technical and service rooms of the museum. The result is a system of squares on two levels: if continuity with Piazza Duomo is guaranteed from the west, a new square is formed on the opposite side for access to the Museum. 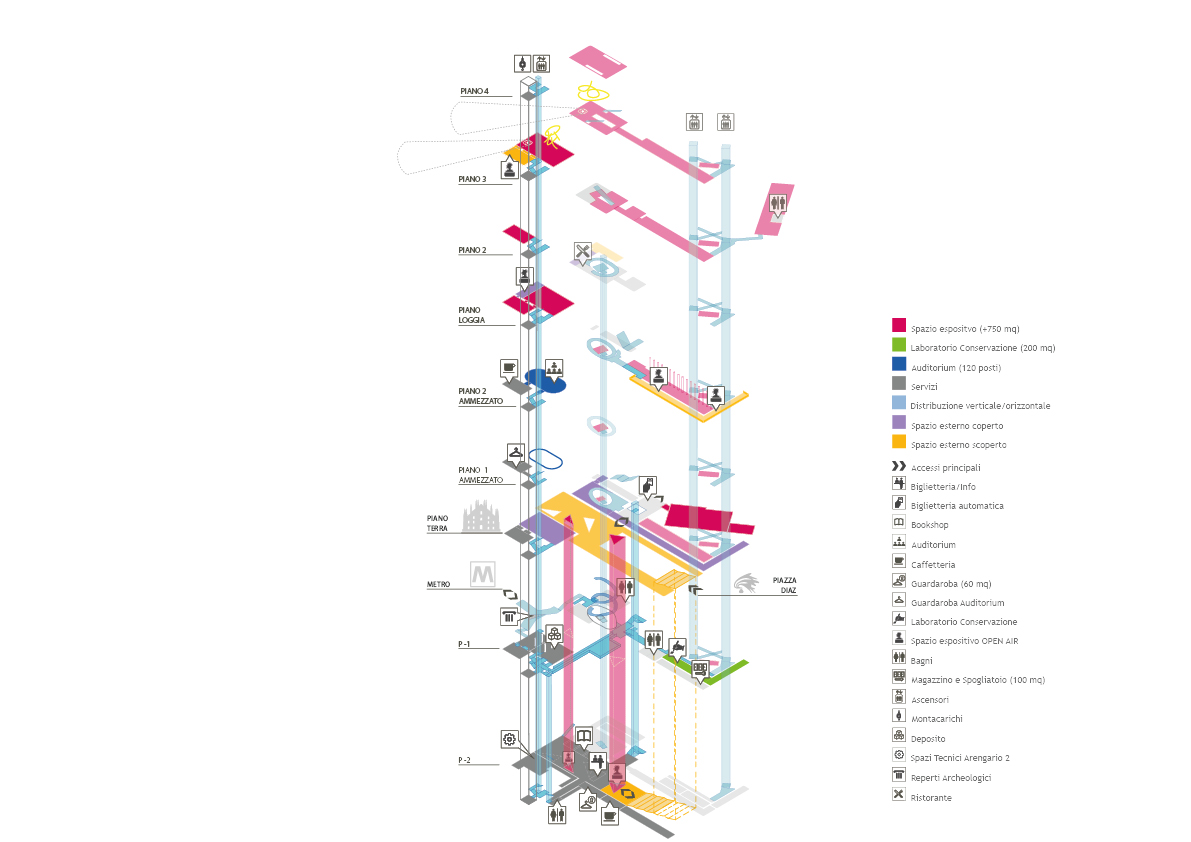 The displacement of the Museum entrance and exit services, ticket office and bookshop, in the central area between the two Arengari, rationalizes the visit experience by enriching the storytelling possibilities of the museum itineraries. The flow of visitors originates from a barycentric position, collects the incoming flows from P.za Duomo, P.za Diaz, from P. ta Reale, from the Metro and redirects them to the different collections. For the Arengario 2 we propose a sequence of visits similar to the already consolidated one of the Arengario 1, with vertical ascent from one floor to the other and the possibility of descent in a single solution at the end of the path.

The choice of connecting the two Arengari with new underground volumes guarantees the continuity of the exhibition path between the two emerging bodies, which would make the presence of a connecting walkway superfluous.
However, as designers who are primarily concerned with respecting and then summarizing the different and contradictory requests and priorities that also emerged during the design process, we have made a strategic choice to propose a solution that has both artistic value and tourist attraction.
In analogy with what happens for the temporary pavilions of the Serpentine Gallery we propose to install a graft structure to ‘hook’ to the Arengari in a temporary and removable form not just one but countless “author” walkways that can be commissioned ad hoc according to a calendar seasonal or on special occasions.
In this way, the connecting structure is not an object that responds only to functional needs of continuity of the visit path, but becomes an occasion, indeed a pretext, for an art event: an object that is different and reconfigurable each time new occasion again draws the public and the attention of the world.
A combination of art, architecture and engineering that transforms a functional infrastructure into an artistic experience that comes to life on the urban scene offered by the exceptional context of P.za Duomo. 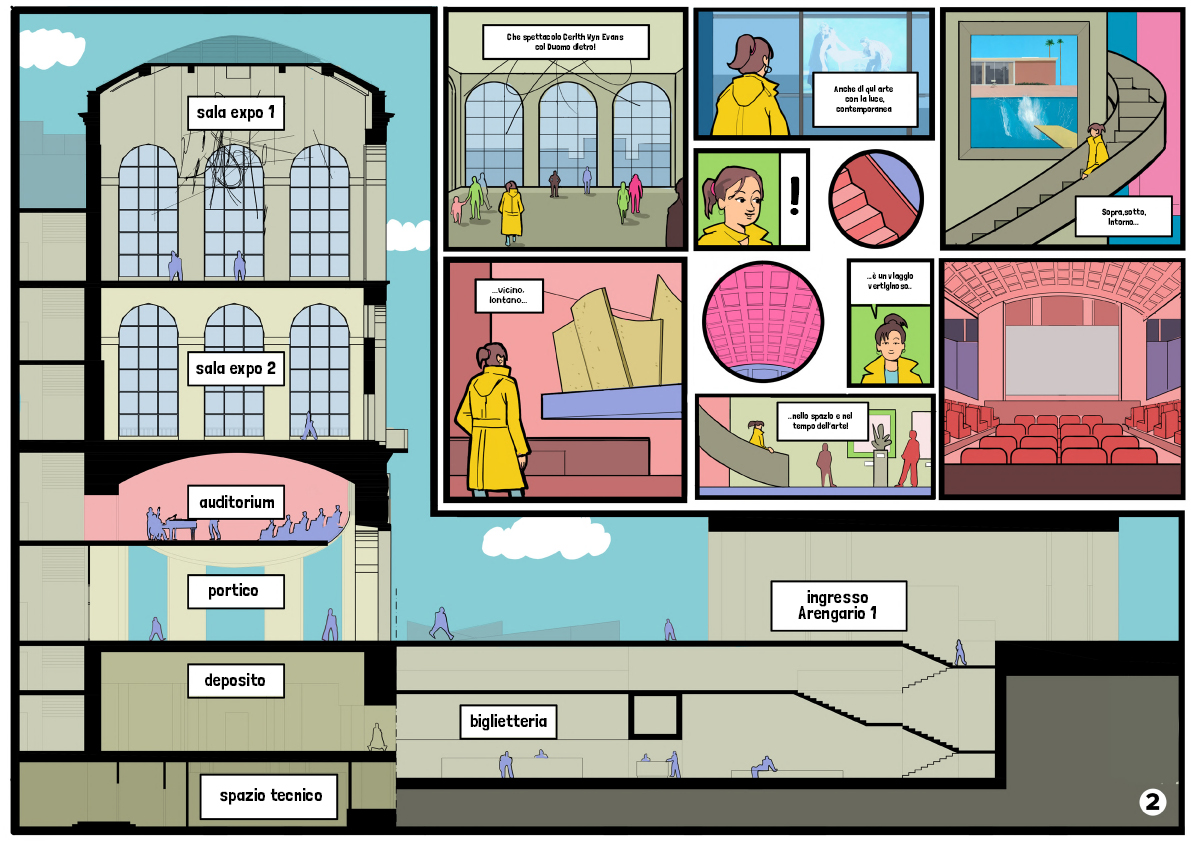 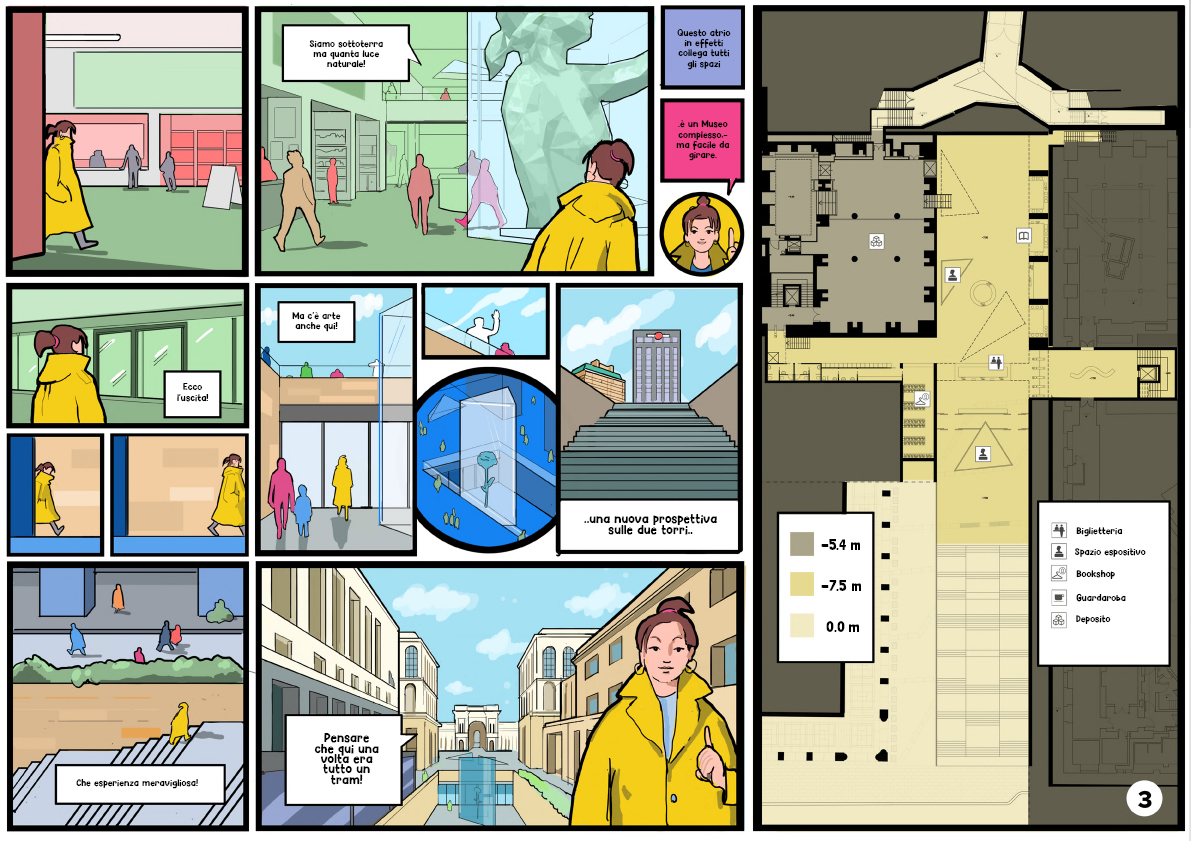