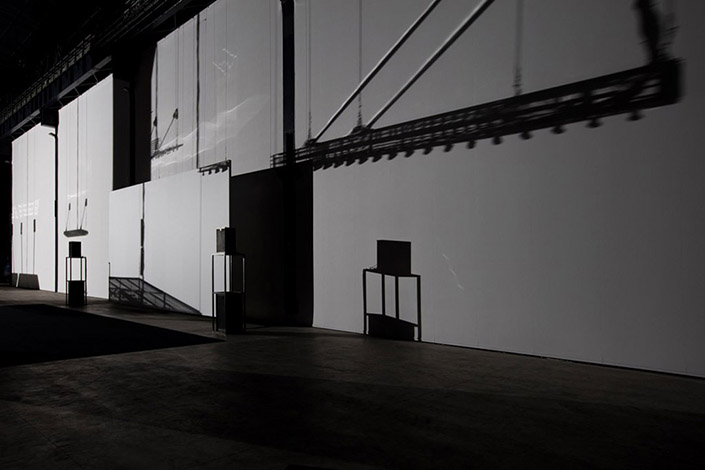 Philippe Parreno is one of the most significant French artists of the past two decades. Throughout his work, which includes film, video, sound and writing and drawing, the artist has always explored the borders between reality and its representation utilizing the vocabulary and means typically associated with a variety of media such as radio, television, cinema and, recently, information technology. Parreno also questions the concept of authorship and has worked in collaboration with many highly influential artists, architects or musicians.
The exhibition at Pirelli HangarBicocca is his first survey exhibition in Italy, and it is conceived as a choreographed space following a precise script devised by Parreno. Curated by Andrea Lissoni, the show is inhabited by a series of key pieces together with recent works and music according to a mise-en-scène conceived by artist. “Hypothesis” presents works characterized by sound and light, including Parreno’s iconic Marquees, made between 2006 and 2015. The Marquees and pianos are sequenced to musical compositions by Agoria, Thomas Bartlett, Nicolas Becker, Ranjana Leyendecker, Robert AA Lowe and Mirways.
Philippe Parreno’s most recent solo shows include: Centre Georges Pompidou, Paris (2009); Serpentine Gallery, London (2010); Fondation Beyeler, Riehen/Basel (2012); The Garage Museum for Contemporary Culture, Moscow (2013); Palais de Tokyo, Paris (2013); Schinkel Pavillon, Berlin (2014); Park Avenue Armory, New York (2015). He featured at the Lyon Biennale (1991, 1997, 2003, 2005) and has participated to the Venice Biennale (1993, 1995, 2003, 2007, 2009, 2011, 2015). Parreno has also co-curated numerous exhibitions, including “Solaris Chronicles” at the LUMA Foundation, Arles (2014) and “Il Tempo Del Postino” at the Manchester International Festival. 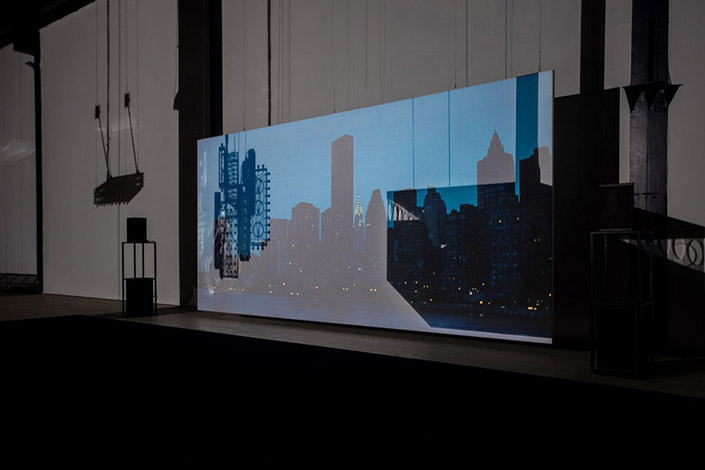 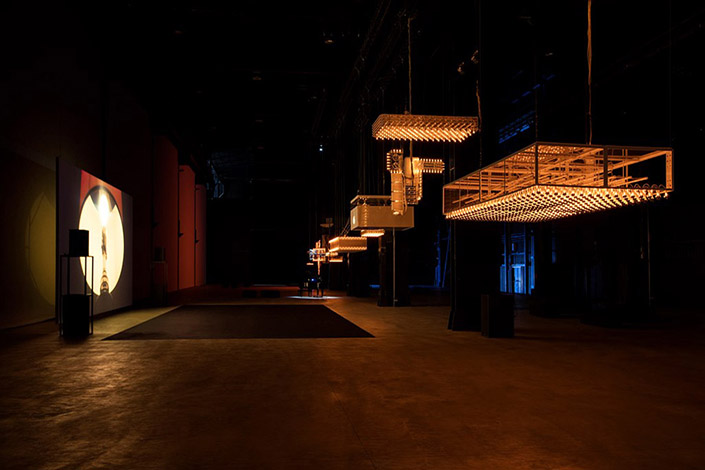 The installation Danny the Street (named after the character created by Grant Morrison and Brendan McCarthy for DC Comics) is composed of nineteen Marquees (sculptures in Plexiglass, lights and sounds realized between 2006 and 2015), and is an imaginary street that winds its way through the “Navate” in HangarBicocca. Made of different sizes, the Marquees are suspended at various height. They were inspired by the luminous signs which hung over the entrances to American movie theatres in the 1950s to advertise films. In Parreno’s work the Marquees become indicators that, no longer advertising a cinematographic show, mark the space by introducing the possibility of an event.

The first work in the series is Marquee (Esther Schipper Plans), realized in 2006 for the entrance to the Esther Schipper gallery in Berlin. On the front of the Marquee, where the film ad was traditionally set, a neon sign reproduces a map of the gallery. The artist conceived these works as enormous 3D captions that can also substitute the object they are supposed to indicate, becoming artworks and at the same time premises or introductions to other artworks.

In 2013, on occasion of his retrospective at the Palais de Tokyo in Paris, Parreno gathered various Marquees, assembling them in a single installation titled Danny the Street, conceived as a specific group and composition of works to last for the length of the exhibition. As the artist affirmed, a central element of his artistic practice is «the pleasure of taking an object and not reinventing it but renegotiating the way it becomes public.» In the comic book novel Doom Patrol by DC Comics, Danny is a sentient and sapient roadway that “transports” itself into cities.

Set in a line, the nineteen suspended Marquees light up at intermittent moments and, like musical instruments, follow a score conceived by Parreno with Nicolas Becker together with a number of different artists and musicians, including Agoria, Thomas Bartlett, Liam Gillick, Ranjana Leyendecker, Mirwais, and Robert AA Lowe. Two Disklavier pianos are placed on the floor and play a score that determines the timing sequence for the entire exhibition, and appear to play conducted by an invisible presence (the pianist Mikhail Rudy was recorded in New York on the occasion of Parreno’s solo show at Park Avenue Armory in July 2015). As the artist explains, «all of the elements in the exhibition—the videos, music recordings, and marquees—can be controlled from a master keyboard that looks like a piano but conceptually is more like a gamelan, with diverse instruments that can be played together.» 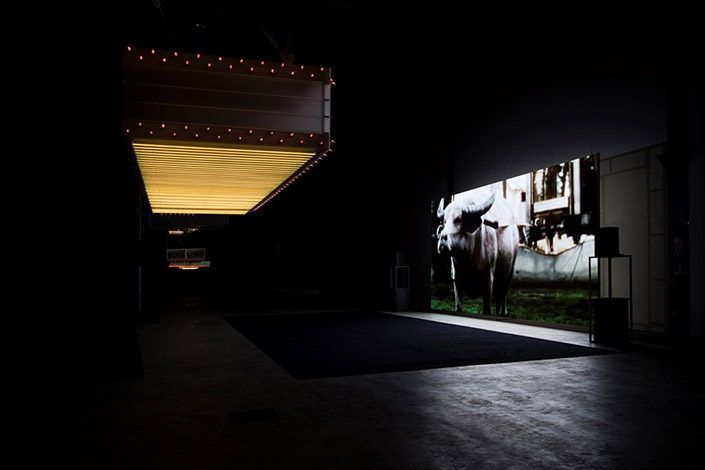 The installation Another Day with Another Sun (2014), realized in collaboration with the artist Liam Gillick, is suspended on the side opposite the Marquees. The artwork – an artificial light that crosses through the exhibition space thanks to a system of suspended tracks – seems to evoke the passage of the sun from dawn to dusk. Along its path, the light strikes the columns of the “Navate” in HangarBicocca, as well as the Marquees, casting their shadows on the floor and on a curtain created with a special white textile.

The interplay of shadows is doubled and interwoven: on the floor visitors can see silhouettes of the Marquees, while at the same time their profiles are projected against the white surface, creating a phantasmagorical landscape. The pairing of Another Day with Another Sun and Marquees generates a unique, single artwork accompanied by an interplay of cross-references, causes and effects and evokes absences that become real presences. The result is an enigmatic, suspended space that recalls an ephemeral urban scenario that penetrates the exhibition space; a science fiction set, but also the history of pre-cinema and son et lumière performances.

Made up of a pattern of LEDs that brings together various films and videos by Parreno, Marquee (2015) is part of the series and stands out for its physical presence in the space. A structure typical of urban public spaces, the large-scale LED screen is an architectural element, and its surface combines the traditional functions of a film screen, but broadcasts videos in a sequence the way a television channel would. In this sense, the combination of the Marquees and Another Day with Another Sun amplifies the image of an abstract, cinematic city evoked by Danny the Street. 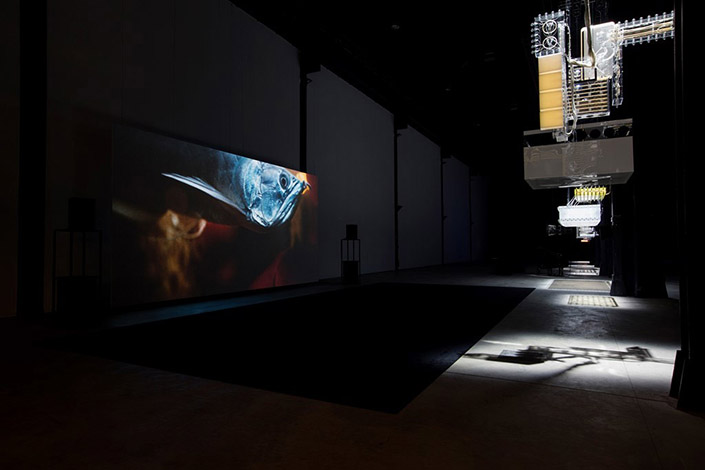 Fascinated by the behaviour of cephalopods, among the most evolved marine molluscs together with cuttlefish, in 2002 Parreno created Alien Seasons (2002), a film built around five brief sequences (which were not edited and are silent) that show the mimetic qualities of a certain species of giant cuttlefish that lives in the Pacific Ocean. The creature possesses photochromic mimetic capabilities that allow it to modify its skin colour based on the environment and conditions it is in. Parreno is attracted to the cuttlefish ’s ability to transform nerve impulses into real images that are reproduced on its skin, thereby becoming an expression of the creature’s imagination. As the artist says, «When I was a kid I always had this fantasy that I could open my mouth and a projector beam would come out; my imagination would just be easy and available, or I would have something on my skin like the giant Cuttlefish.» 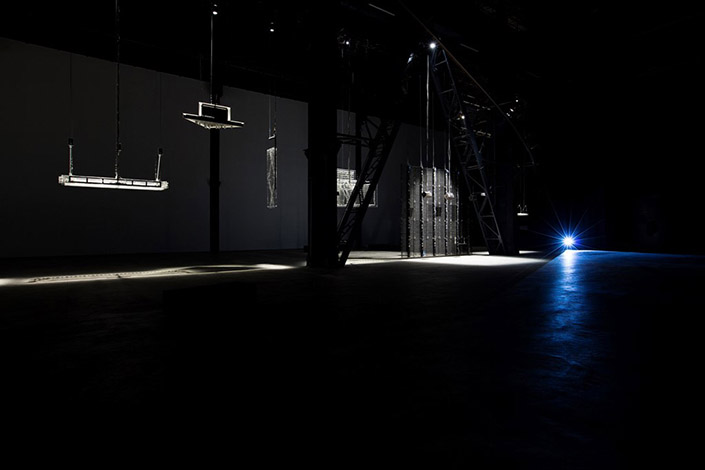