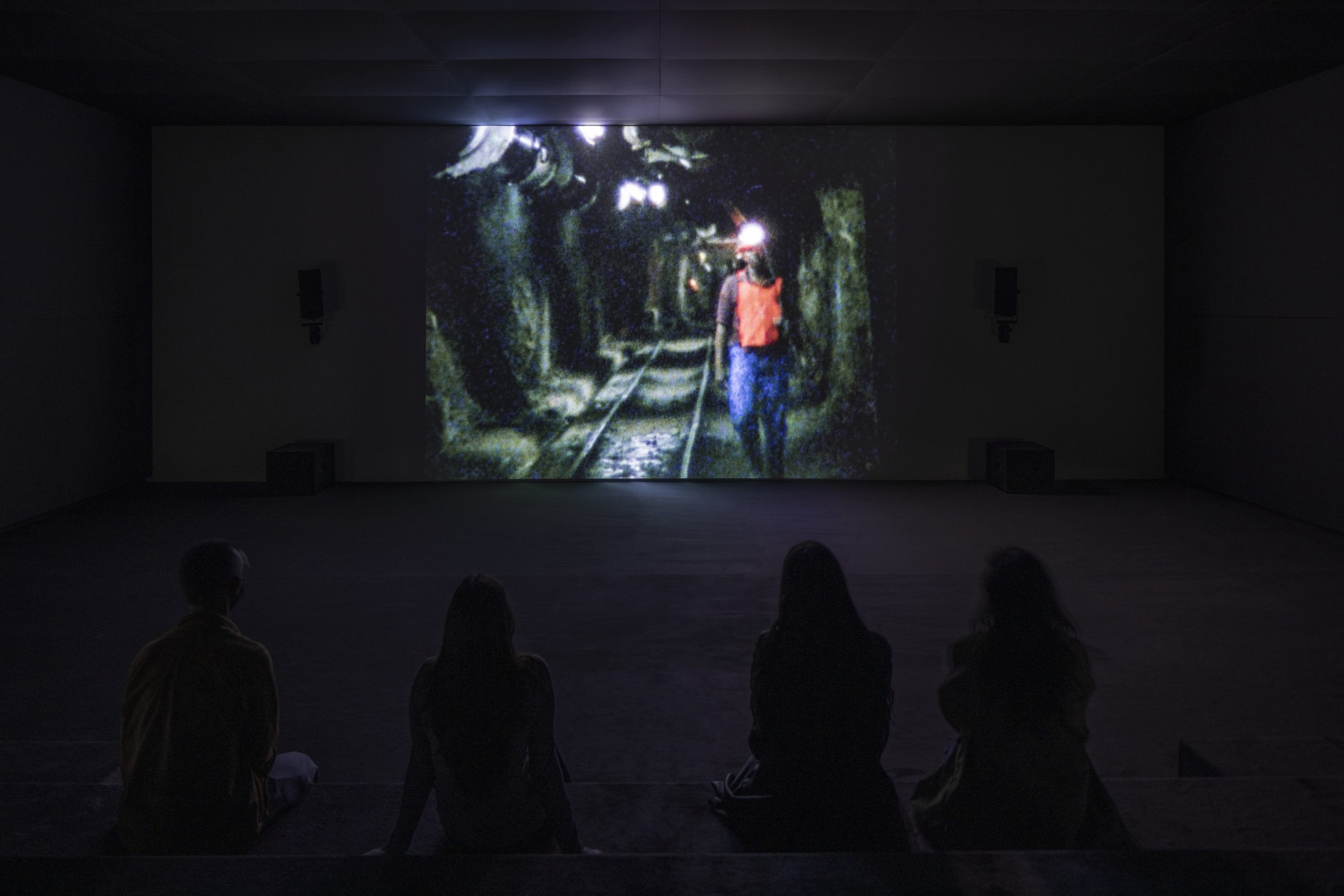 “Sunshine State” presents an immersive experience of Steve McQueen’s unique visual language. The six film works and one sculpture in the exhibition are among the most important of the artist’s career, representing free narrative models and unexpected points of view on wide-ranging, intersectional aspects of historical and contemporary social contexts. For Pirelli HangarBicocca, McQueen has conceived a site-specific exhibition project that unfolds in the Navate and Cubo spaces, and on the exterior of the building. Through a non-chronological layout, the exhibition features a survey of Steve McQueen’s career in the visual arts, highlighting the evolution of his practice over the last two decades. Taken together, the works presented here form a visual narrative, revealing the artist’s radical take on reality and offering an opportunity to imagine new readings of McQueen’s poetics. 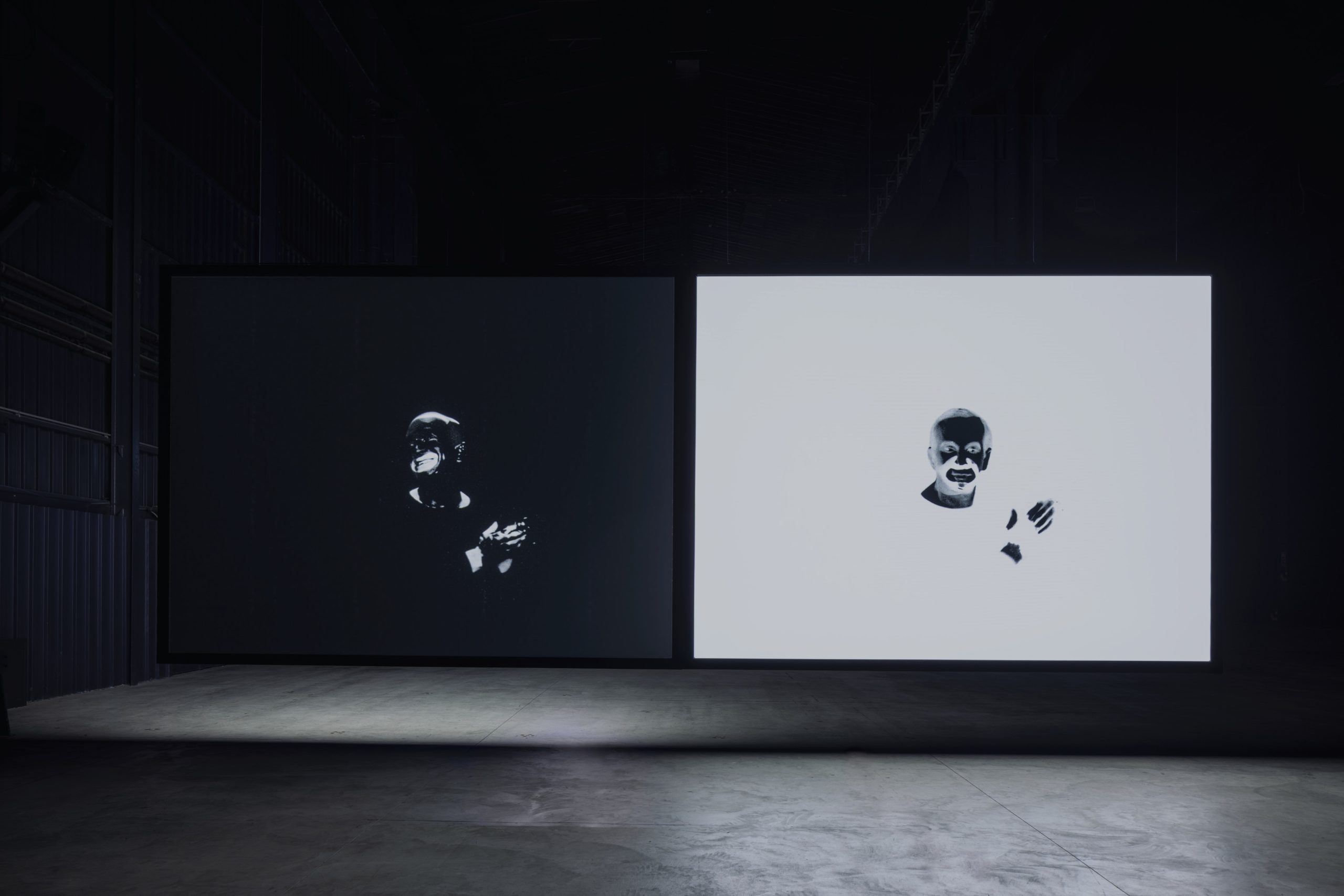 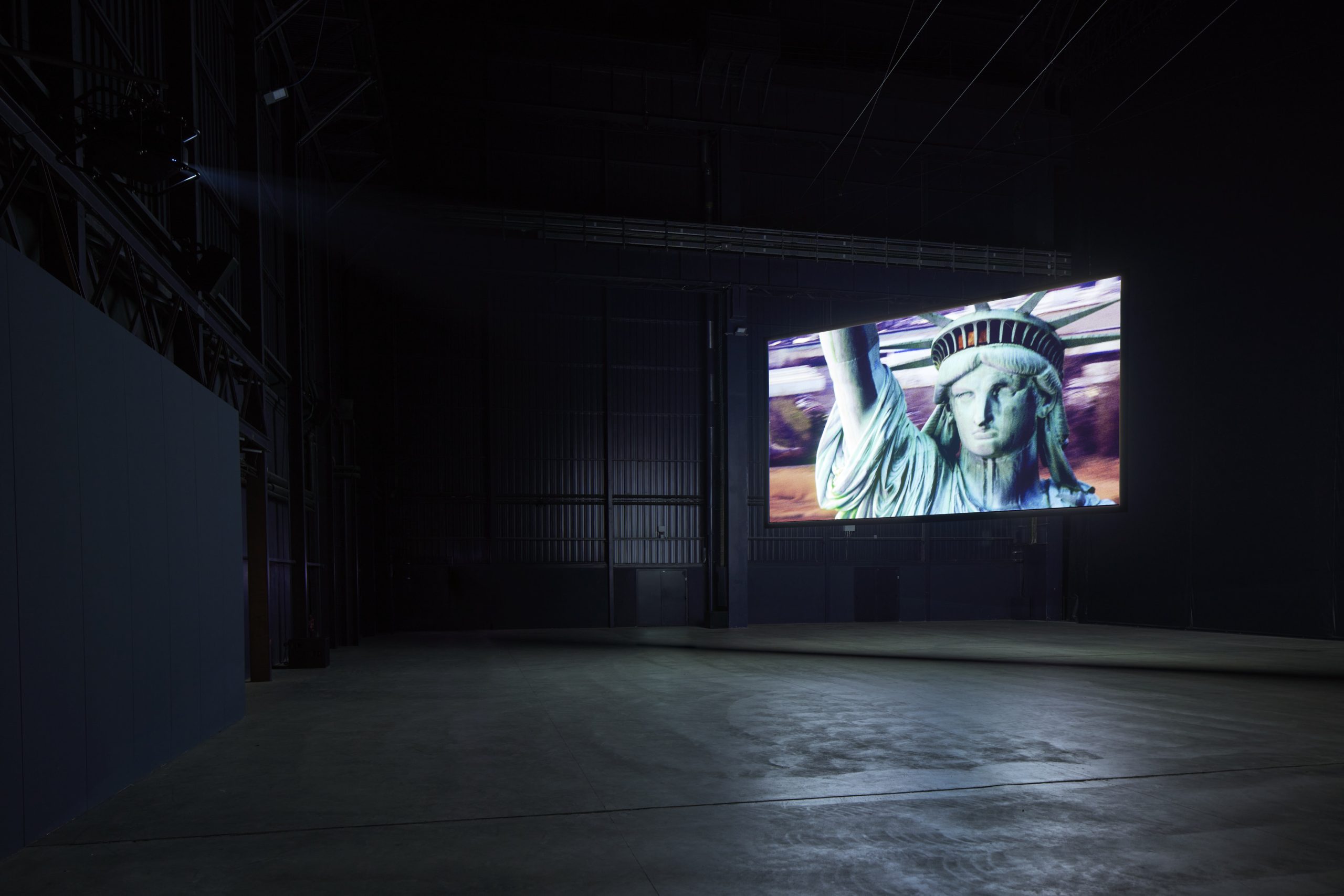 Projected onto a large screen, Static depicts an unusual portrait of an icon of the twentieth century: the Statue of Liberty in New York. The film is shot from a helicopter continually circling the monument, alternating long shots that show the metropolitan skyline with close-ups of the statue revealing its greenish corroded and oxidized metal. The image judders and flickers, disturbing the act of looking. The sense of disorientation is amplified by the deafening noise of the helicopter, acoustically reflecting the circular motion of the camera. Realized in 2009, when the Statue was first reopened to the public after 9/11, Static poetically evokes themes of freedom, surveillance, and the construction of identity. 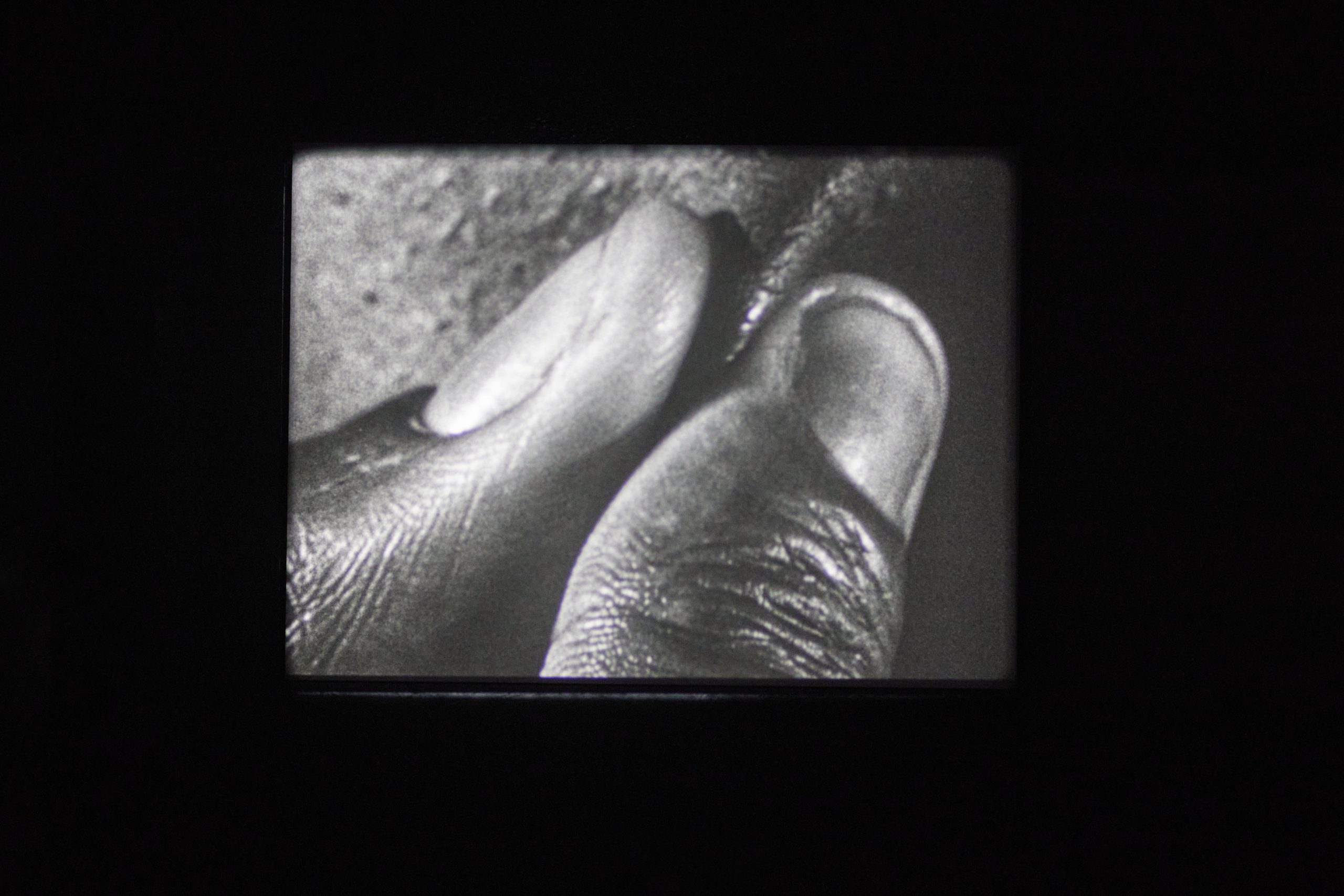 Shot in 16mm, the film shows McQueen’s nipple as he strokes, pinches and rubs it insistently, evoking moments of intense physicality. In the silence of the film strip, punctuated by the mechanical sound of the projector running continuously, the image becomes increasingly abstract. Cold Breath takes on autobiographical traits, leading the viewer into an intimacy transcending the boundaries between  corporeality and subjectivity. As in one of McQueen’s early works, Bear (1993), in which two naked men are portrayed wrestling, also in Cold Breath the body is raised to an “iconic presence” in the exhibition space, as noted by curator and art historian Okwui Enwezor (1963–2019). Playing on the ambivalence between impulse and desire, McQueen questions the deeper meaning of observing and, as he himself has pointed out: «One reason I wanted to investigate the image of the nipple was that it is like an eye, I wanted to explore the sensitivity of touch.» The focus on the act of looking, illustrated more explicitly in Charlotte (2004), is explored by the artist in its most physical and fleshly connotation, through a continuous reiteration of the action. 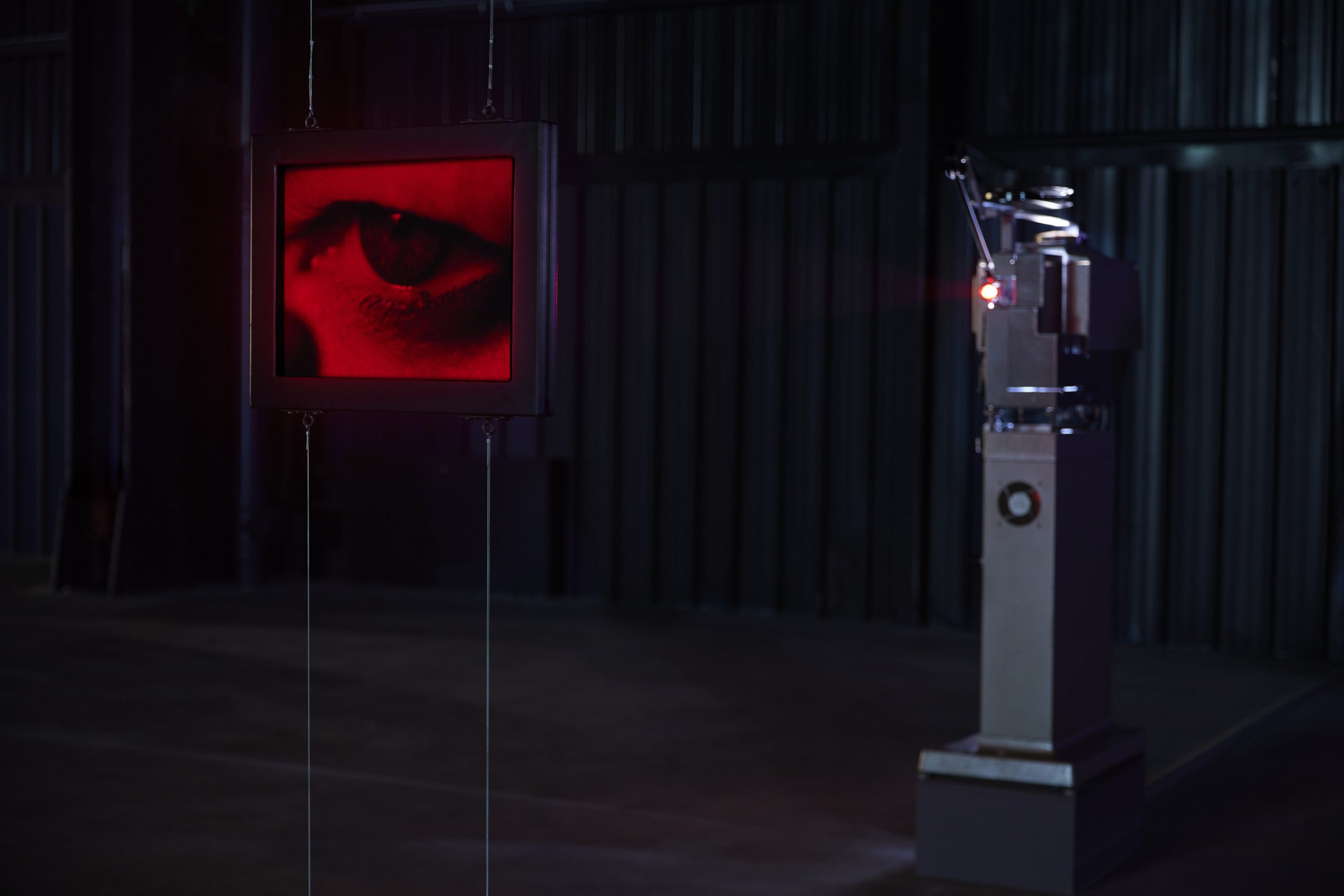 In Charlotte physicality is again dissected and the film portrays the close-up of the eye of the British actress Charlotte Rampling, with the artist’s finger looming over it. The color red suffuses the unstable image, shot with a handheld   camera and alternating out-of-focus moments in the shifting relationship between the 16mm camera lens and the woman’s gaze. Wavering between threat and excitement, the artist’s fingertip approaches the eyelid, caressing it, moving over the folds of skin, until for an instant it touches the eyeball. In the film, the two figures are connected by an intimate bond of confrontation and resistance: their complicity reveals the analogy between the gaze and the framing of the filmic language. The work is also a tribute to the actress, one of the icons of European cinema. The silent duel evoked in Charlotte, as sensual as it is fragile, becomes a tangible manifestation of observation, the founding act in the cinematographic lexicon. 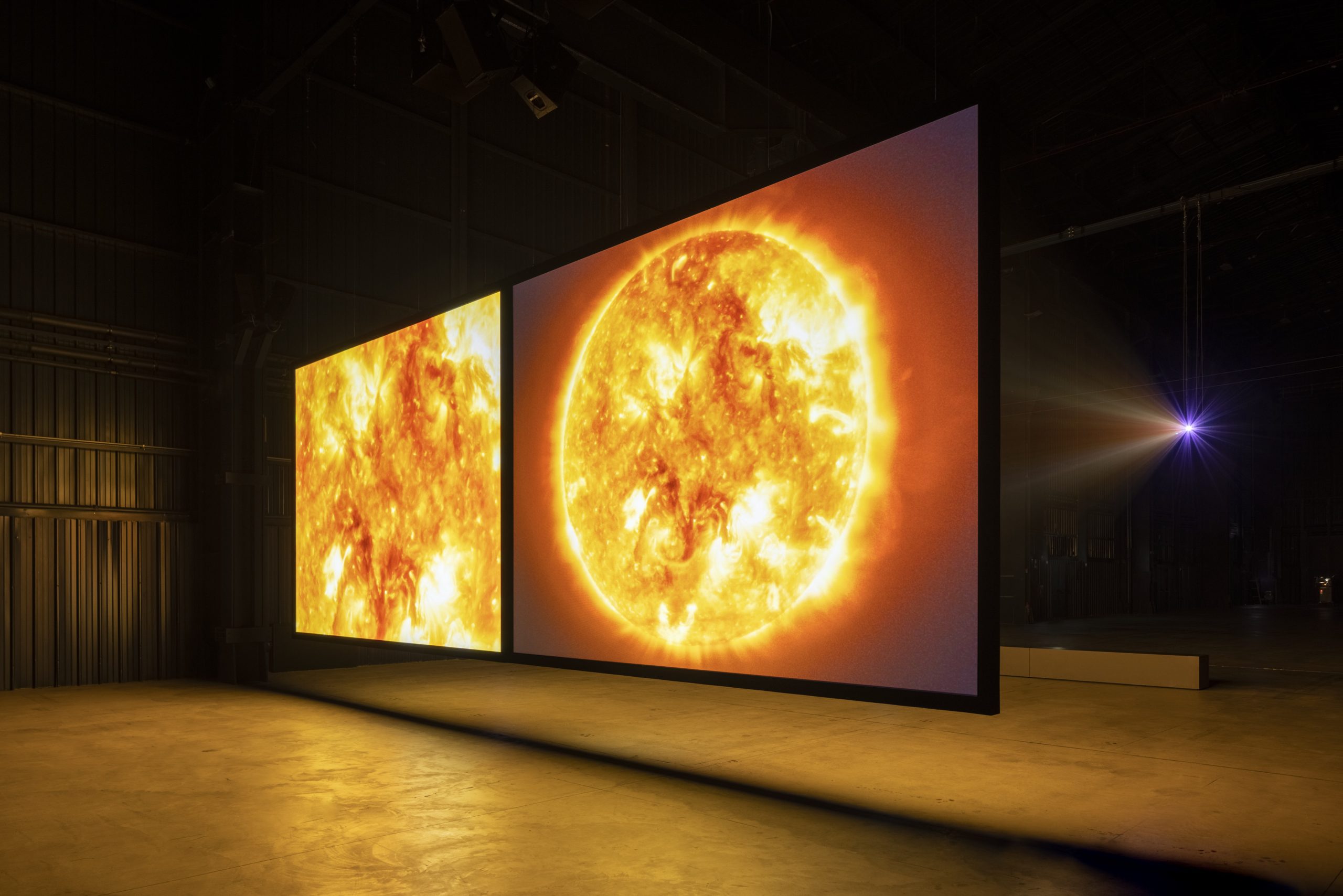 Presented for the first time to the public, Sunshine State is a two-channeled video projection shown on both sides of two screens placed one next to the other. Conceived as an immersive experience, the work features a continuous sequence of images and oral narrations that cyclically expand throughout the duration of the piece. The specular structure of the display is reinforced by the inversion of black and white in the film. 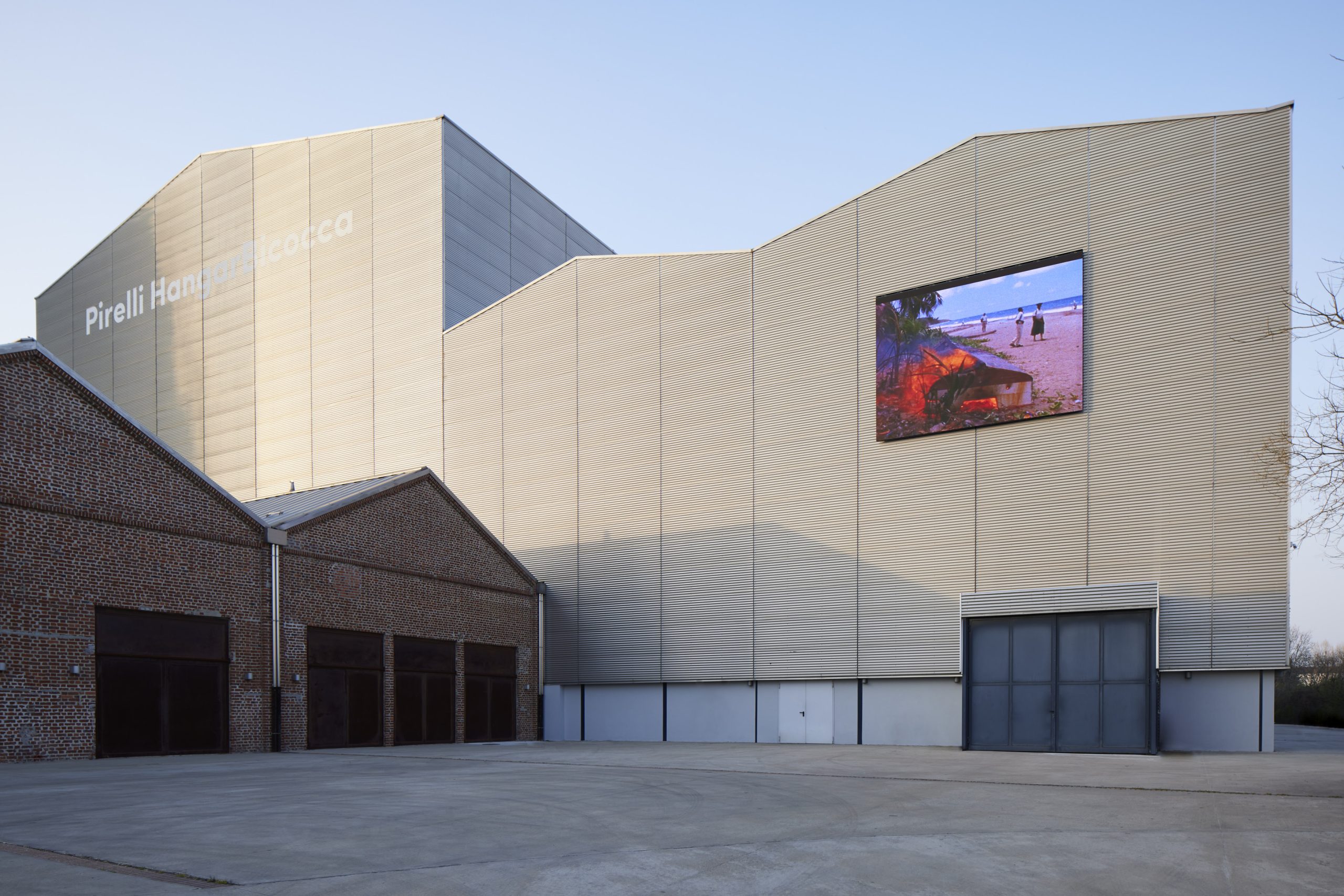 Caribs’ Leap consists of two videos shot on the Caribbean island of Grenada, the homeland of Steve McQueen’s mother and father: one of the two on an LED screen placed on the outer façade of Pirelli HangarBicocca and the second inside the Navate space. While the first video creates a short-circuit, in which a fraction of a second is amplified into an endless loop, the second seems to reverse this conception of time, presenting an image of Grenada over the timespan of a whole day. Past and present intertwine within a cyclical motion prompting reflection on colonial oppression and the forms of resistance that still resonate in life today. 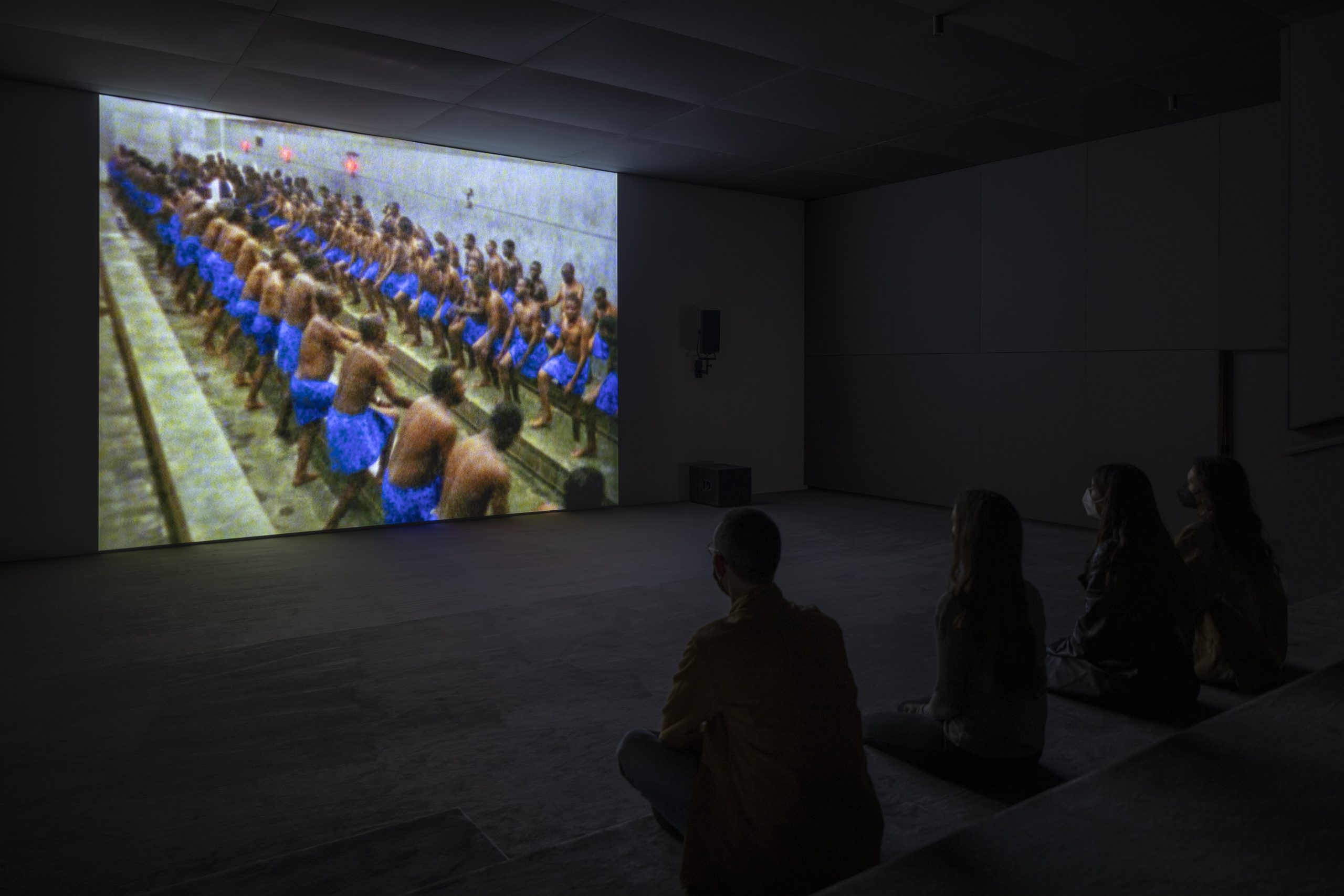 Shot inside the TauTona goldmine in South Africa, one of the world’s deepest, Western Deep opens in utter darkness as miners descend more than three kilometers underground in industrial elevators. In Western Deep, shot on Super 8mm film, McQueen creates a correlation between the filmic medium and the material impact of the mine. Western Deep complements another of McQueen’s works, Caribs’ Leap, both commissioned for documenta in 2002 and always featured together. In particular, in the exhibition at Pirelli HangarBicocca Western Deep is presented in the space of the Cubo inside a specifically conceived screening room that evokes the cavernous darkness pervading the film, while part of the second work is shown outside the building, in resonance with the sky and radiant brightness of the ocean, one of the principal elements in Caribs’ Leap. 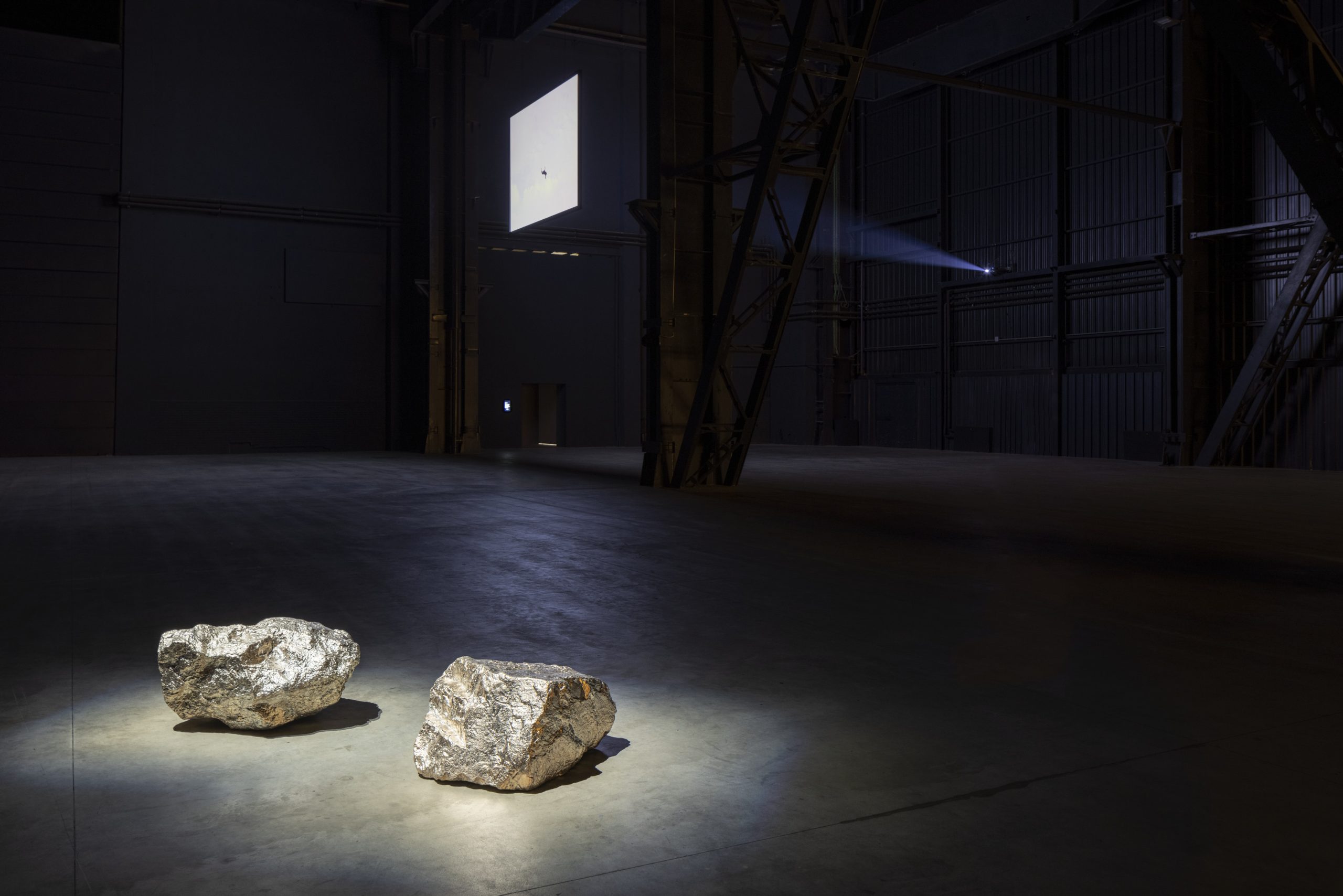 Two marble rocks covered in silver leaf sit side by side on the ground. The elements of reflection and form come into play. Gravity is reinforced at the same time as luminosity which infiltrate the objects and its surroundings. Like the Chicxulub asteroid responsible for mass destruction on Earth 66 million years ago, these sculptures have an other-worldly feel, but they are also connected to earth’s regeneration and the richness of its mineral fabric, and instigate new life.