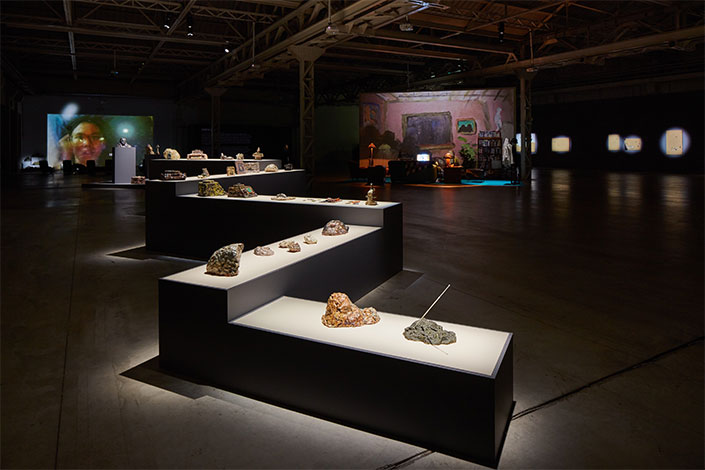 “the eye, the eye and the ear” is Trisha Baga’s first institutional exhibition in Italy and covers fifteen years of the artist production, from her first piece There’s No “I” in Trisha (2005-2007), conceived as a sort of TV sitcom that questions the gender stereotypes of all the various characters whose roles Trisha Baga plays; to the more recent work 1620 (2020) produced on the occasion of this show. Bringing together five video installations investigating the relationship between the body and the constantly evolving image technology, the exhibition also presents a rich selection of ceramic works produced since 2015 and six pieces from the series Seed Paintings (2017), composed of sesame seeds and foam.

Trisha Baga (born in 1985 in Venice, Florida, currently lives and works in New York City), an American of Filipino origin, is one of the most innovative video-makers of her generation, combining different languages and other media, drawing from television and film imagery along with home movies. She grapples with such themes as gender identity, relations between the real and the digital world as well as technological evolution, in order to disclose a different perspective of our contemporary imagination.

The exhibition meanders through the various media, which have characterized Trisha Baga’s career, ranging from VHS cassettes and DVDs to 3D devices, and is deeply rooted in her performative practice. Visitors are invited to experience the entire show wearing 3D glasses, in an immersive environment which expands the physical space through numerous visual and sound layers.

The show’s display hints at the aesthetics commonly found in natural history museums, not only in its style of presentation, but also by using an unusual classification system that intertwines the idea of the fossil with high-tech devices such as today’s virtual personal assistants, thus creating a sort of temporal short-circuit. Through her ironical and witty perspective Trisha Baga focuses on the excessive reliance and hopes we put on technology, staging in her work its most fragile and failing aspects. 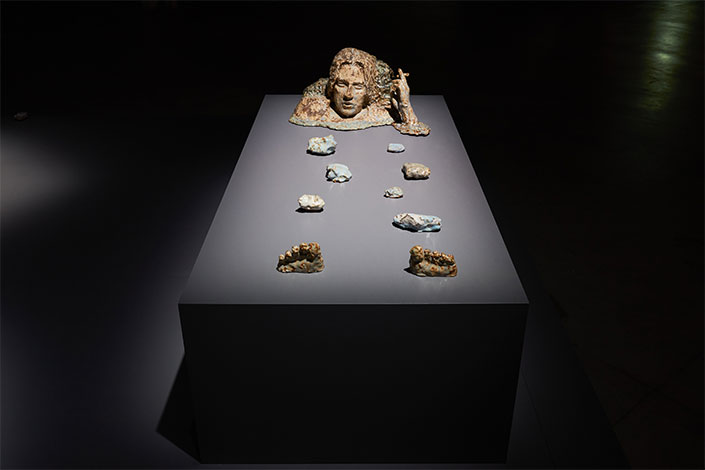 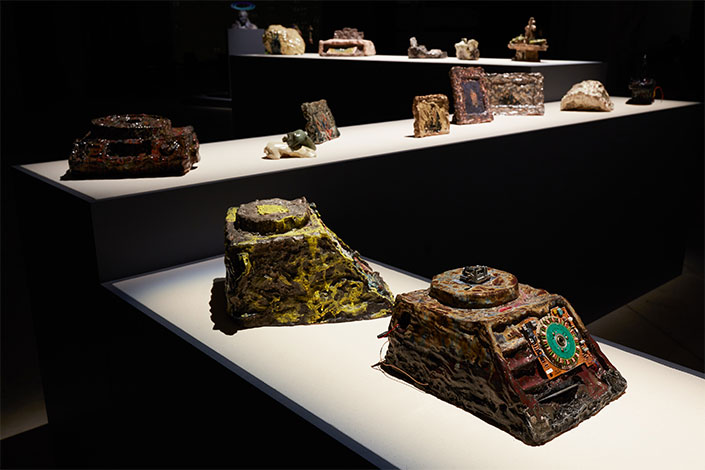 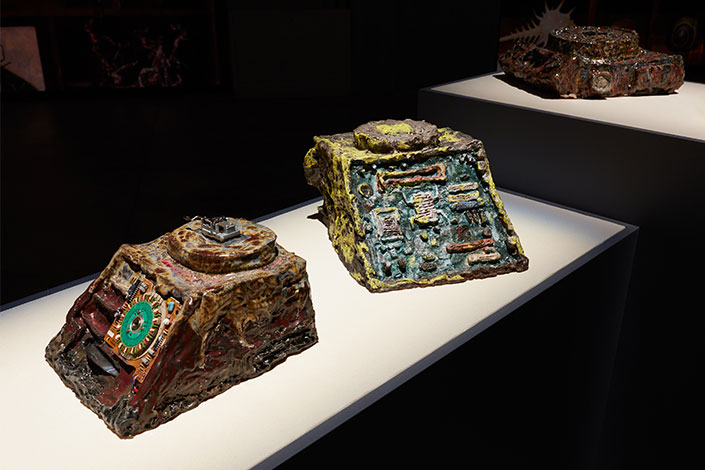 Situated right after the entrance of the exhibition, «the geological corridor of evolution» of the manmade artifacts of civilization—as defined by the artist—is a collection of more than twenty ceramic pieces realized from 2015 to the present day. These elaborate objects appear as if fossilized and placed on plinths—like future archaeological finds—, hinting at the common aesthetics found in natural history museums. Retaining their vividness, the glazed ceramics are wryly repurposed as museums exhibits and displayed according to an unusual classification system: a pyramidal plinth hosts portraits of Sphinx-like poodles with flaming heads. On a segmented plinth, a group of seemingly abstract sculptures representing coded objects are positioned alongside others that mimic electronic devices—as a typewriter or a microscope—incorporating organic elements and e-waste. 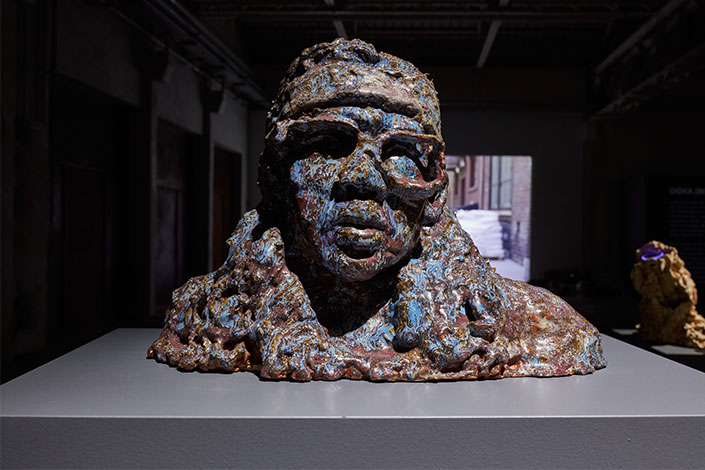 The next section composed of figures includes a self-portrait of the artist and references to pop culture icons like Elvis Presley and drag queen celebrity RuPaul. They are part of a series titled Calcified Encasements for Virtual Assistants, which function as potential housing for Artificial Intelligence devices, such as Alexa. The materiality of these pieces seems to embody a hypothetical primordial rendering of the reality that surrounds us; in particular, the ceramics implanted with residue of processing chips and wires question the excessive reliance and hopes we put on technology and stage its most fragile and failing aspects. 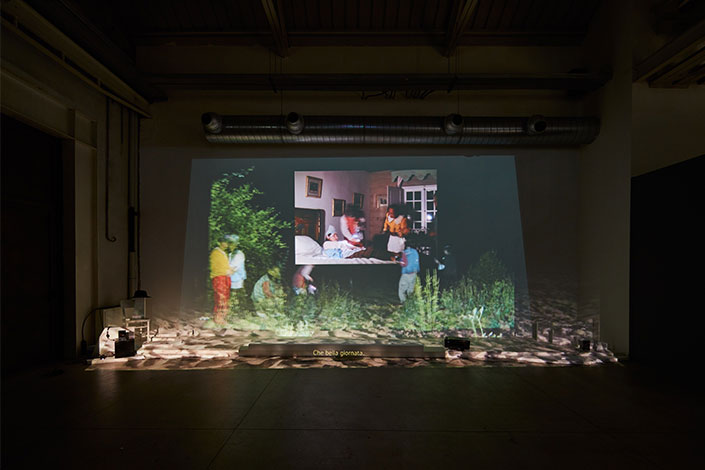 This multifaceted installation is an exploration of the «condition of enclosing different meanings» locating its emotional thrust around two main narratives: the evolutionary lineage of mollusks and the interspecies relationship between Baga and Mollusca, the homophonic pseudonym the artist has given to the household AI unit developed by Amazon. Comprised of two simultaneous projections—one 2D, the other 3D—the installation speculates on the “hypothetical ancestral mollusk,”—scientifically thought to be the first mollusk from which the others evolved. This installation displays a heterogeneous composition of physical and virtual materials playing with the viewer’s sense of time and reality, blurring borders between real and filmed spaces. In contrast with the moving image, various objects are arranged and at times spotlit by the projection in front of the screen, such as an oscillating fan, an analog clock, rocks and the Echo Dot Alexa. 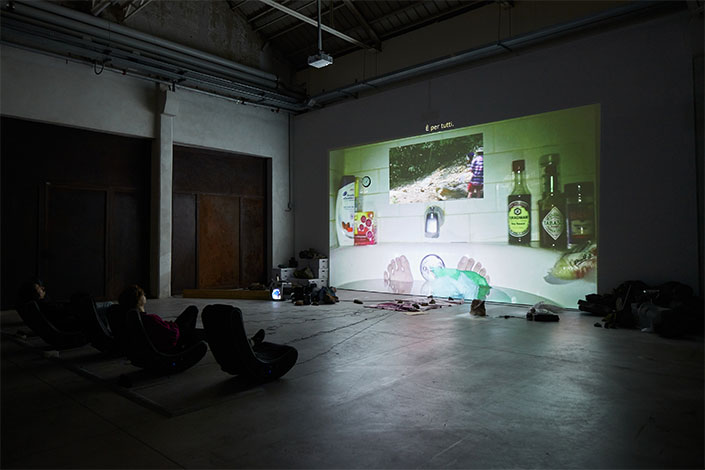 Mollusca & The Pelvic Floor recounts a power struggle between human and machine in the form of a multilingual dialogue, employing a language of repurposed bits of pop culture mixed with personal and found footage. These include clips of the film Contact (1997) by Robert Zemeckis (b. 1952), videos of the artist’s family in the Philippines, and extracts from Sci-Fi books including Imago by Octavia E. Butler (1947–2006) and Dan Brown’s (b. 1964) Origin. 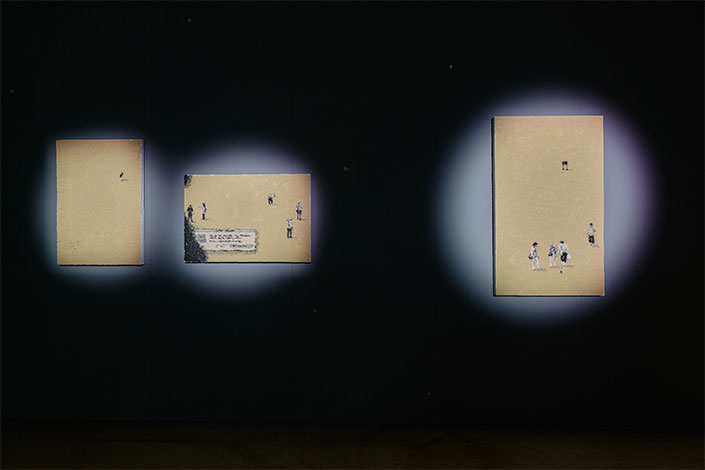 Made of seeds and foam mounted onto wooden panels, this group of paintings is part of a larger series of works initiated by the artist in 2017. These pointillist reproductions obtained by using organic materials depict figures in desert-like landscapes blended with computer-generated elements, revealing Baga’s oppositional interplay between the organic and the digital world. The starting point for the scenes portrayed in the seeds paintings are the pedestrians in her work Virahanka Trail (2017)—a multimedia installation including footage of tourists walking up and down sand dunes at a Japanese beach—, which alludes in its title to the ancient Indian mathematician Virahanka (700 AD ca.) who originally discovered the Fibonacci sequence (named after the Italian mathematician of XIII century), a numerical sequence in which each element is generated by the sum of the two that precede it.

Recalling the visuals of Virahanka Trail, the figures in the paintings are juxtaposed with sketches of Photoshop dialogue boxes indicating their conversion from the spatial dimension into the pictorial one. These textured panels offer a materic version of the pixelated images of the videos—suggesting a re-composition of the images fragmented by technology—showing how the artist expands the possibilities of painting by envisioning it through the lens of the digital. Through this series, Baga creates a parallelism between the act of painting and editing on the computer, revealing the multifaceted aspects of her methodology. 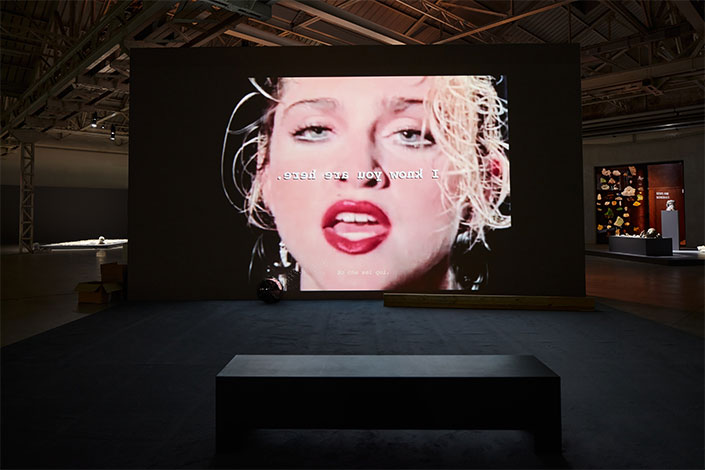 This single-channel video projection is deeply rooted in the artist performative practice. The work recalls multiple imageries: from the popstar Madonna to the Christian iconography of the Virgin Mary, as well as the climate phenomenon El Niño linked to periodic warming across the central and east-central Equatorial Pacific Ocean. The work introduces Baga’s fascination for natural phenomena and popular culture, comparing the linguistic evolution of Madonna’s cultural output to the water cycle. Through the exploration of metaphors and mythologies, water becomes a recurrent reference in Baga’s oeuvre due to its physically and symbolically malleable properties. These aspects are captured in the video through syncopated edits comprised of non-diegetic sounds—like the noise of the rain being associated with the materiality of the pixelated images on the screen—intertwined with montaged and collaged found footage of Madonna’s 2006 Confessions concert tour and readings of the popstar’s journal entries—written during the filming of Evita (1996) by Alan Parker (b. 1944). In between these rapid and fluid sequences, Baga is once again taking on the role of the performer, audience and editor, seen on screen while singing along to Madonna’s tunes, manipulating the projector and blending a variety of images—reminding us of the endless stream of swiping through media content—or roller skating in front of the lens, interrupting the streams of light and creating absences in the shape of her body.

Madonna y El Niño is projected onto the wall and over a disco ball positioned before the screen which generates changes in light forms in the space. This work established the visual aesthetic and loose narrative structure that the artist continues to explore today; through this piece Baga brings together cryptic and instantly recognizable source material, creating her own analysis on personal mythologies. The closing scenes of the video are extracts from the film Tropical Malady (2004) by Apichatpong Weerasethakul (b.  1970), accompanied by a female voice reading an excerpt from the novel Beloved by Toni Morrison (1931–2019)—the first African-American woman to win the Nobel prize—, the overlapping of these two references shows how Baga draws upon the legacies of film and literature as a way to explore collective history. 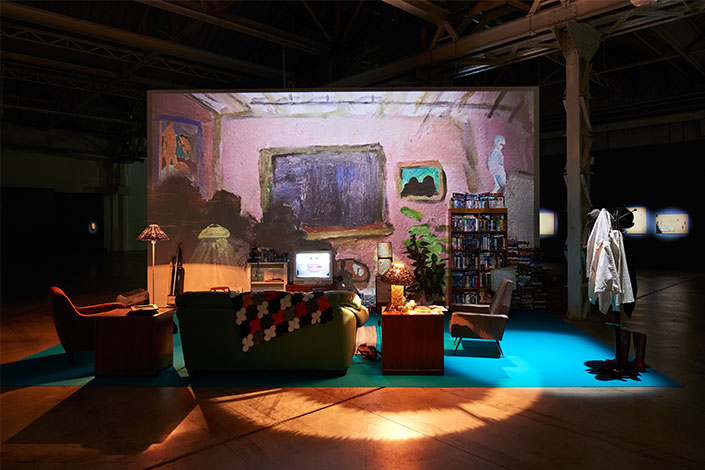 Displayed as a domestic space, There’s No “I” in Trisha is the first video made by Baga, conceived as a sort of TV sitcom that questions the gender stereotypes of all the various characters performed by the artist herself. The immersive installation welcomes visitors with a living-room—reminiscent of a typical set from American television shows—while a nearby monitor is showing a teenage love drama, where Baga ventures in playing as the sole actor, director and set designer. As an ode to popular culture, the video opens with an extract from the book Frankenstein (1818) by Mary W. Shelley (1797–1851) and the hit Somebody To Love by the Queen. It reveals contents typical of shows such as Friends or Frasier—complete with canned laughter, lightweight script, and stereotyped characters—re-examining how typecast gender roles, sexuality and social norms are portrayed in popular programming.

The one-woman comic series runs for four seasons, filmed by the artist over the course of two years. The video weaves a familiar plot characterized by snippets of everyday life, through which Baga actively examines her own role as an artist, envisioning it as an integral part of her work. As alluded in the title, the work investigates the notion of the self and questions its inaccessibility, emphasizing in particular the rearrangement of experiencing “I” as a study of the multiple figures interpreted by the artist. 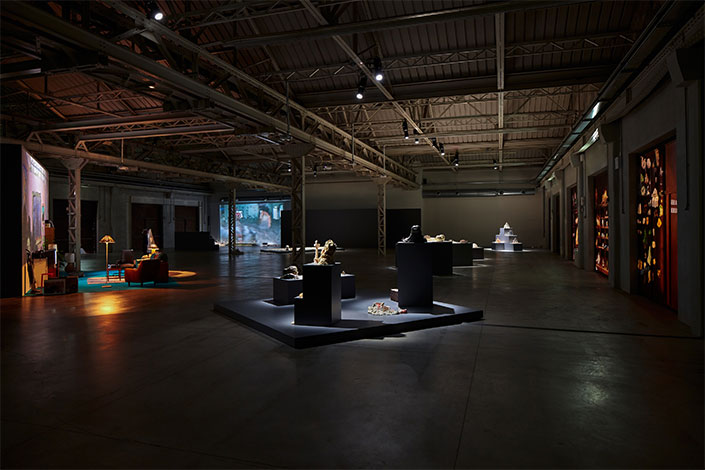 This video installation is a new production realized by the artist especially for the exhibition at Pirelli HangarBicocca. 1620 takes its cue from the legendary site known as Plymouth Rock, which symbolically marks the origins of the United States of America. The video opens with a text referring to a fictional organization called DNA USA, an experimental gene therapy program initiated as a response to the current “illness” in the United States of America.

Conceived as a 3D documentation of an imaginary theatrical performance with the actors impersonating the pilgrims, the video gives a specific role to technology. With the development of each act the narrative frame breaks up further, mimicking how media technology has changed the way we tell and read stories over time, fracturing and re-compositing temporal sensibilities and perception.

According to the artist, «1620 is an impressionistic science fiction, which reframes Plymouth Rock as a source of narrative stem cells in the hands of genetic scientists studying deep-seated flaws in The American Drama.» By tracking the history of the Rock and its repeated fracturing over several centuries, Baga employs the point of view of the cinematic composite as the source of cultural identification. 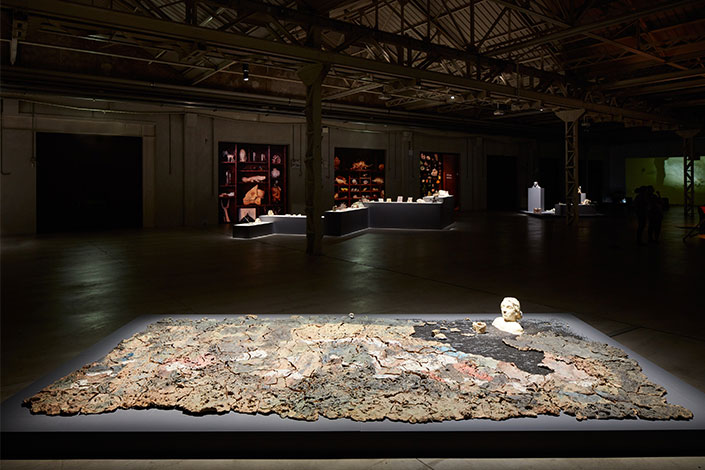 Conceived in connection to the work 1620, this fragmented ceramic piece is placed horizontally onto a pedestal and invites the viewer to observe it from above. Roughly reproducing the scene of the Mayflower Compact—the first agreement for self-government to be established by the Pilgrim Fathers on their arrival to America—the work ironically reminds the viewer of the tangible monument of freedom “Plymouth Rock” and emphasizes its fragility and susceptibility to manipulation. The crumbled ceramic floor becomes a wry metaphor of the eponymous site and much like the historically questionable Rock—frequently scattered while being transported to different sites over the centuries—, it represents a broken landmark that has been altered repeatedly, questioning how historical facts have been passed on, fractured and re-composed over time.

As explained by the artist, «The title simultaneously refers to the error message on projectors when lacking a media input, and the limitations of archeological records and historical understanding of Filipino culture pre-Spanish and American colonization.»