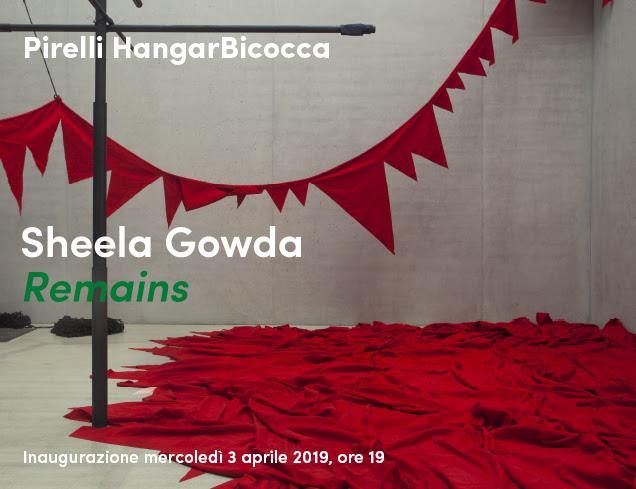 Pirelli HangarBicocca invites you to the inauguration of the exhibition

Sheela Gowda (Bhadravati, Karnataka, India, 1957; lives and works in Bangalore) is one of the leading names in contemporary art in India. After studying at Ken School of Art and Visva-Bharati University (India), Gowda deepened her research on painting at the Royal College of Art in London. Her work ranges from drawing, to sculpture, to large-scale installation, and involves the use of materials that often convey cultural values linked to the context they stem from. The artist’s works, characterized by a strong spatial dimension, assume elements of Modernism as a starting point, elaborated by the artist via production processes featuring strong ritualistic references. The emphasis on process can also be linked to local traditions of craft and the implicit role of labor in making art.
This exhibition is Sheela Gowda’s first solo show in Italy and, in addition to two new productions, it presents a wide selection of works she has made from 1992 to the present time, including watercolors, prints, and site-specific installations. The latters are distinguished by a large variety of materials—such as hair, organic substances, cow dung, incense, and natural pigments—and are displayed in connection with the iconic architecture of the Navate at Pirelli HangarBicocca.